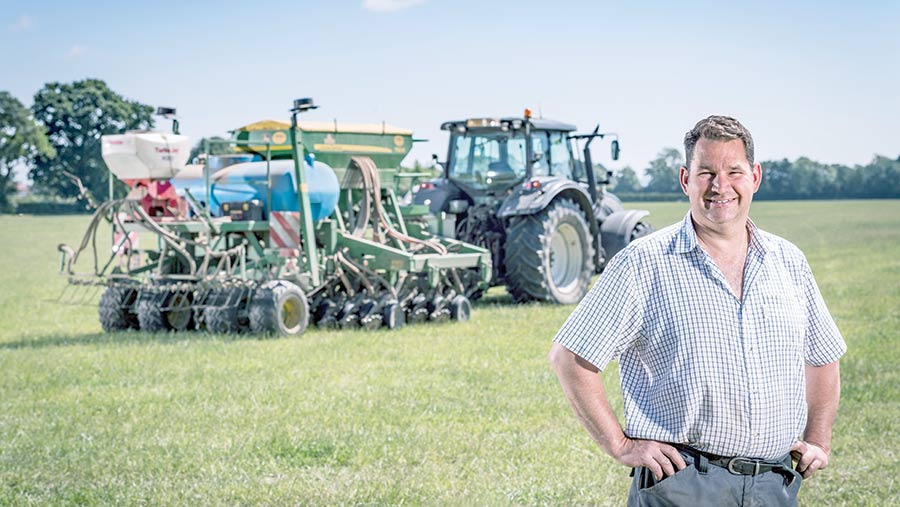 An interest in soil health was the starting point for major changes made to Angus Gowthorpe’s mixed farming system in Yorkshire, the results of which have slashed establishment time and seen margins increase.

Having first moved from a traditional tillage regime which included ploughing to an interim approach using strip-till, he took the next step and introduced no-till establishment four years ago.

Going down the strip till route initially showed that costs fell, but yields were maintained, he recalls. “It gave me the confidence to keep going.”

As a result, Mr Gowthorpe purchased a 3m John Deere 750a drill for use on his home farm, but was soon being asked to drill spring crops for neighbouring farmers – a market created by increasing blackgrass pressure.

Given the demand and ease of operation, he swapped his drill for a 4m version and hasn’t looked back.

He now has a wider and more diverse rotation, uses cover and companion crops, has introduced herbal leys for both cutting and grazing and grows blends of cereal varieties across the 165ha he farms between York and Selby.

Novel pesticide products and home-brewed liquid fertiliser are becoming part of his crop management, as he balances the requirements of building healthy soils with the commercial realities of farming.

Importantly, input use has fallen, costs are down, less labour is required and margins are on the up, while soil health continues to improve. Crops are now established in a quarter of the time that they used to be.

The varied soil types at Approach Farm have stabilised since he minimised their disturbance and encouraged soil life.

“They hold nutrients and moisture better, so crops stay greener for longer,” he reports. “They also drain freely and earthworm numbers are up.”

The “pop and burble” noise they make after rain is another sign that things are moving in the right direction, as rainfall drains down worm holes and old root channels. Organic matter content is also rising, he adds.

Bringing spring crops into the rotation early on in his journey allowed him to start experimenting with cover cropping, buying different seed mixes and “giving them a go” before spring beans.

They are now an integral part of his system, along with catch crops where there’s a six-week window between winter crops.

Multi-species cover crop mixes are preferred, for their soil health advantage. It means that their destruction has to be done with glyphosate, rather than by physical means with a crimper roller, as they flower at different times.

“Crimper rollers are fine on single species stands, as the components need to be at anthesis [flowering] for the technique to work,” he explains.

Mr Gowthorpe was an early adopter of some of these techniques and continues to make changes, pointing out that it takes time to see results.

“Soils are always improving. I’ve learnt by trying things and speaking to other like-minded farmers, as well as from being a member of BASE and attending the Groundswell event.”

His cover crops are mob grazed with sheep over the winter, provided soil conditions allow.

“The aim is to eat one third, trample one third and leave one third. That allows me to drill the following bean crop ‘on the green’ if conditions are favourable.”

Where spring oats are planned, he takes a more cautious approach, due to their smaller seed size. In general, the rotation is constantly under review, helped by his ability to rotate grassland around the farm.

“This year, the barley being grown on lighter land has a problem with stubby root nematode. The pest only occurs where oats are part of the cover crop mix, so I’m going to replace them with either triticale or Hungarian grazing rye, as these are not hosts to the pest.” 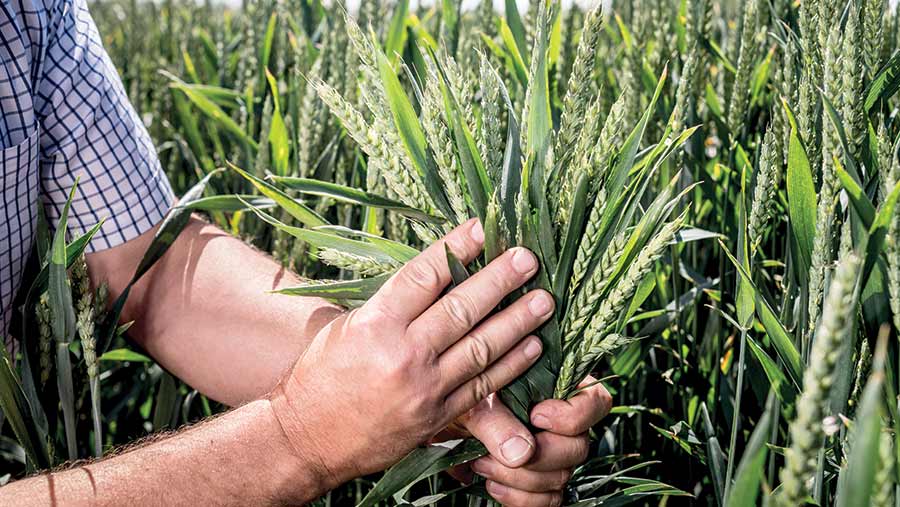 His wheat crops are all a four-way blend of hard feed varieties Crispin/Gravity/Shabras/ Kerrin, chosen for their good disease scores and similar maturity dates.

Growing a blend reduces disease problems and allows him to use less fungicide, focussing on low rate T1 and T2 applications based on chlorothalonil.

Nutrition and seaweed extracts are used at the T0 timing, with the emphasis on maintaining a healthy plant.

Nitrogen use has come down to 180kg/ha, without a yield penalty, with molasses being added to each nitrogen application to reduce scorch and balance the C:N ratio, helping to feed soil biology.

Winter barley is a two-way blend of feed varieties Orwell and Surge, with conventional barley being preferred to hybrid for volunteer reasons.

Oilseed rape is grown once in every seven years and always with a companion crop, to support soil fungi.

This year, he plans to use a conventional variety with white clover, buckwheat and beans, drilling the beans a bit deeper than the rape, clover and buckwheat.

“I drill it in the last week of August. Some of the companion crop species are taken out by frost, others have to be controlled with Kerb or Astrokerb (propyzamide). I plan to keep the clover alive in the bottom of the crop throughout, taking it into the following wheat crop.

“The companions certainly help with cabbage stem flea beetle, as well as providing nutrients and giving a rooting benefit.”

White clover could play a more important role on the farm in the future, he believes.

“My ultimate aim is to have a permanent understorey of white clover, which will provide 25kg/ha of nitrogen as well as suppressing weeds.

“I have managed to keep it going from a ley with clover in and then into a crop of beans, but the following crop of wheat was so competitive that there wasn’t enough light for it.”

If he succeeds with this aim, nitrogen could be reduced further. With herbal leys on the farm, no fertiliser is used on his silage grass, with cattle muck being applied to as many acres as possible up to Nitrate Vulnerable Zone limits.

“Feeding the crop with organic nitrogen is the direction of travel. Fertiliser choices are likely to become more limited in the future.”

This year, in the absence of effective alternatives, Angus Gowthorpe is considering testing the insecticidal properties of black soap for cabbage stem flea beetle control in oilseed rape.

He is also considering orange oil, which will be used on autumn drilled cereals to help control virus-carrying aphids.

“This is a barley yellow dwarf virus hotspot,” he says. “Up until this year, I’ve been using Deter (clothianidin) to help manage the threat, with a follow-up insecticide where it’s needed.

“If orange oil works as expected, it could form part of an integrated approach.”

Orange oil is for soft bodied insects only, so doesn’t control flea beetle. On that pest, black soap has been used in France with some success, he reports.

A Farmers Weekly series showcasing arable farmers who are ahead of their time and are trying new approaches and pioneering new technology.