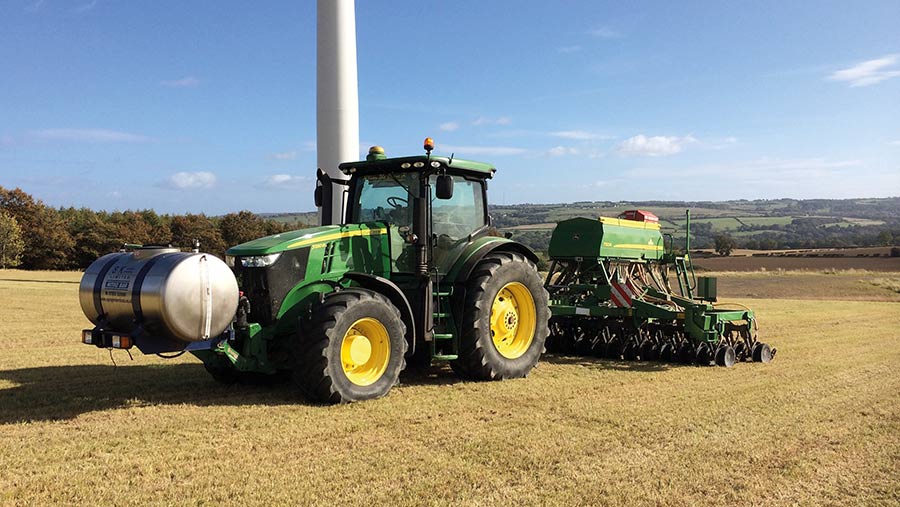 The last two seasons have really tested just how resilient both Edwin Taylor’s soils and farming business are to the effects of the climate.

Farming 800ha at 230m above sea level in south Northumberland is always going to bring its climatic challenges, but two extremely wet autumns have pushed that to the limit.

The result has been more spring cropping and fewer opportunities to use cover crops than the farmer and chairman of Base UK would have preferred in his rotation.

However, Mr Taylor – who farms in partnership with his father – believes his lower input, lower cost model has reduced the risks from it.

“I think we’ve made the business more resilient to adverse weather conditions.”

Mr Taylor is not worried that he had to put 60% of the area in spring cropping because the risk is lower perhaps than a high input, high output winter crop.

Harvest 2021 will be the second in succession where spring cropping has dominated, with the knock-on effects of the wet autumn of 2019 still being felt.

Unfortunately, because of such a high quantity of spring cropping in last year’s harvest, his 2021 harvest is looking again to be around 60-65% spring cropping.

Nothing was harvested on the farm before September, with spring oilseed rape being cut into October, which meant again the autumn had turned wet before winter wheat establishment.

“Ideally, we would be at around 30% spring cropping. The majority of the extra spring cropping would have been winter wheat, so it will have a knock-on effect in cash terms.” 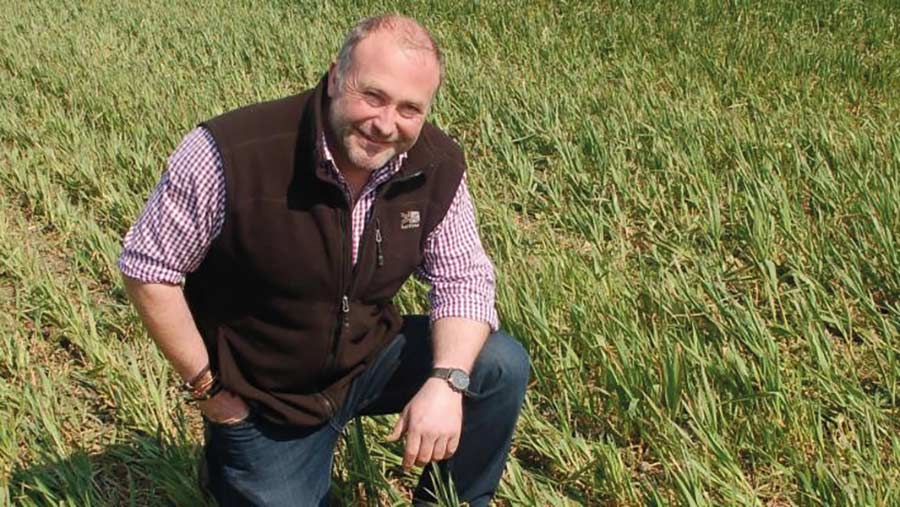 The delayed harvest has meant there are no cover crops in the ground this autumn, for the first time in eight years.

“Usually, the spring crops are established into a cover crops, but we haven’t been able to do that. How that affects our soil quality going into the spring is a bit of an unknown quantity.”

The window of opportunity for cover crops is narrow, he admits. “The bulk go in after winter wheat or spring barley, and usually they are harvested from the beginning to middle of September.”

Typically, the cover consists of oats, radish and mustard, and sometimes a legume, with the seed mixed in an old Keenan feeder before being drilled.

“Some might say we are wasting our time putting in a cover crop that late.” But Mr Taylor is convinced if conditions allow and you can establish it, it doesn’t need to be that big.

“As long as you’re keeping roots in the ground, it is helping stabilise the soil and assisting with water infiltration over the winter months. It’s better than no cover crop.”

His fragile high sand, high silt, low clay soil is also prone to slumping, he says. “It’s what drove us towards no-till originally.

A Horsch CO6 tine drill – originally with Duet coulters and later replaced with Borgault sweeps – was purchased in 2005 as it dealt with residues better than the farm’s Vaderstad.

In 2012, the sweeps were replaced with narrow Dutch openers to alleviate smearing and reduce soil movement.

More recently, a Moore Unidrill, ultimately replaced by a John Deere 750a disc drill, was purchased to drill directly into large cover crops.

Drill choice is not that important, he suggests. “The key thing is not investing a lot of capital while you’re experimenting.”

Another factor driving Mr Taylor towards a system that focuses on soil health was how establishment became more challenging when he wasn’t applying as much farmyard manure to his land, after selling his dairy cows following the foot and mouth disease outbreak in 2001. 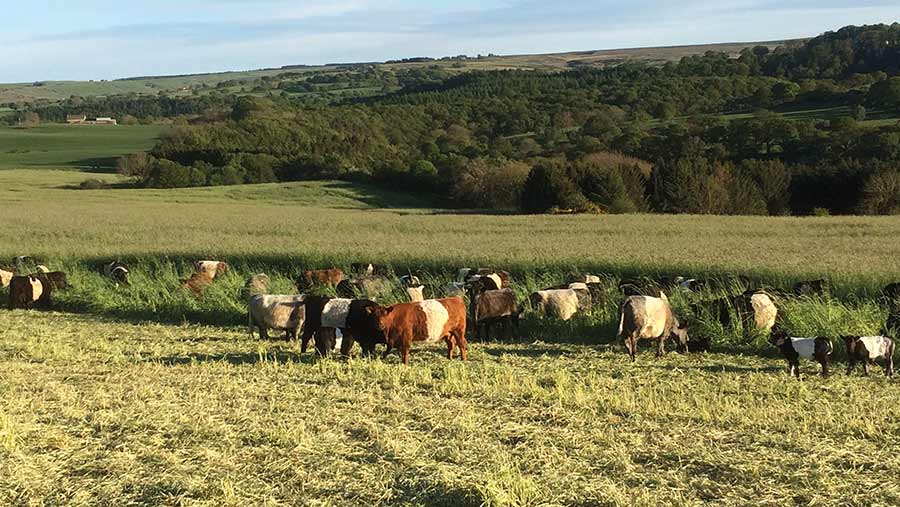 As a result, he’s brought back up the numbers of his suckler herd to the 170-180 that will be calving this spring.

These are now grazed and calved from early spring on 24ha of short-term Italian and Westerwold ryegrass, plus clover ley established in the autumn after a cereal crop as part of the arable rotation.

“We push this quite hard so we have some early growth in the spring and so we can rest our permanent pastures, which are slow to recover after being grazed in the winter months.”

He says the lack of water infrastructure and fencing is a challenge, especially after calving, but the fields are much cleaner for bromes because there has been no soil disturbance other than from the cattle around the water troughs. 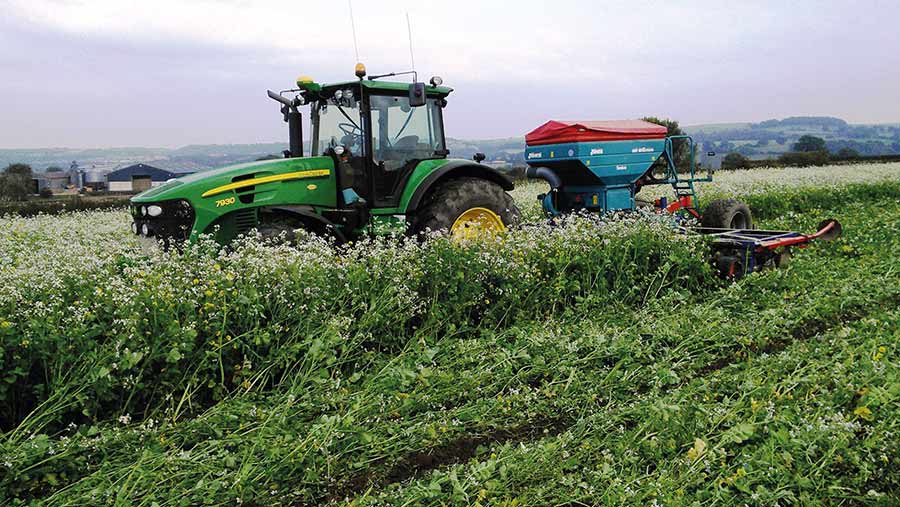 The grass is sprayed off three days prior to being cut, baled and direct drilled into wheat.

“We’ve managed to keep the white clover alive this autumn, so providing it doesn’t smother the wheat out. We might experiment with having a green mulch through to next autumn.”

That would potentially both fix a little nitrogen for the cash crop and help save on herbicide inputs.

He’s keen to reduce inputs where possible, but says it is easier said than done on land that is marginal for farming.

Mr Taylor hasn’t used any seed dressing or insecticides for a number of years and typically applies two or three fungicide applications, with the later sprays more important as the weather deteriorates and the later harvest.

“We tend to use the better chemistry, such as the SDHIs. The trials suggest you get a better return on investment.”

“I’ve tried it, but I have been disappointed with the way crops have performed when we have reduced N.” 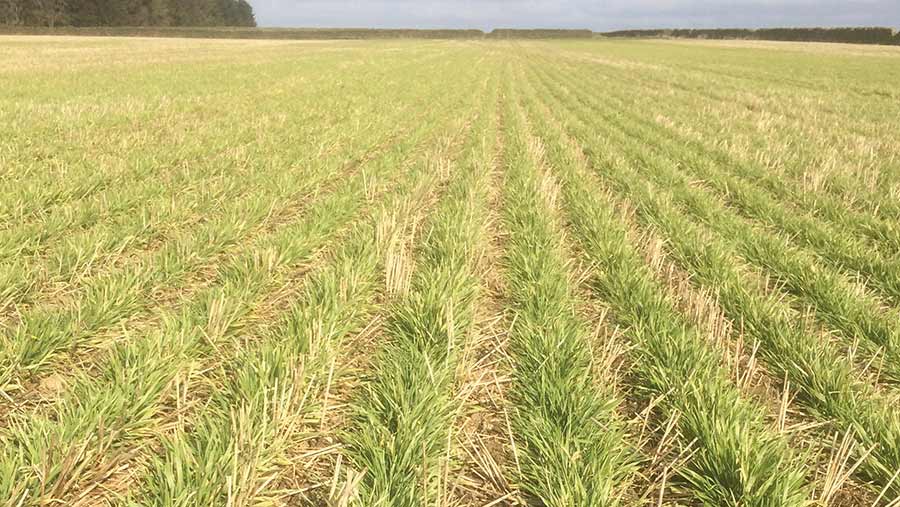 The yield drag sometimes associated with a switch to no-till was also an issue.

He thinks it was a case of trying to do too much too quickly – reduce fertiliser, going no-till, adding a lot of residue that needs nitrogen to be broken down, taking it away from the crop. “We had a problem with that.

“But where we have kept nitrogen levels where they were historically, our yields are edging up.”

Yields are also more consistent, he says. “Last year was a prime example. Our wheat yields exceeded our 10-year average of 8.75t/ha, despite areas of fields with nothing in them and a very dry spring.

“Our spring crops also yielded very well. I think that is a reflection on how we farm,” he concludes.

Edwin Taylor’s tips on converting to a regenerative agriculture approach