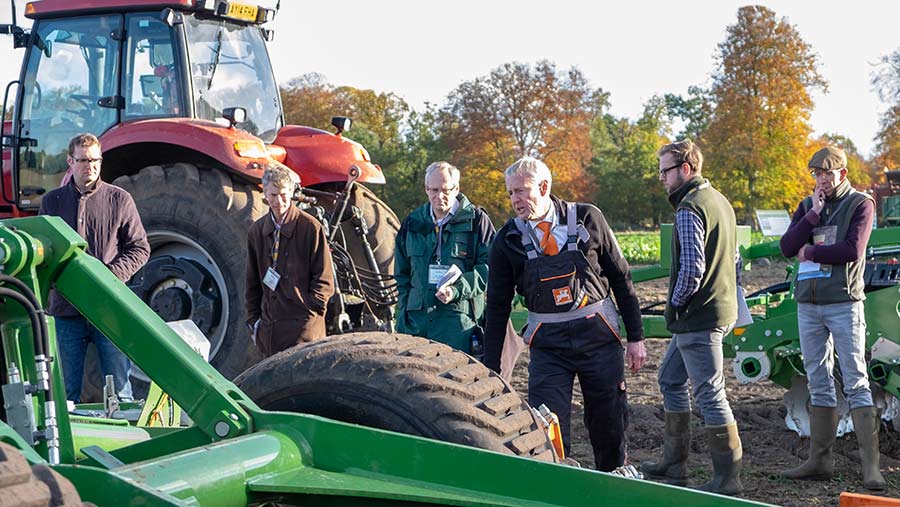 A way of benchmarking soil health plus a tool aimed at helping farmers tackle soil compaction were among the highlights at Farmers Weekly’s Soils in Practice 2018 event.

We take a look at the practical messages that can help growers improve their soil management.

What can we learn from field boundaries?

Defining soil health is tricky, but growers need look no further than the undisturbed ground around their field margins for a simple way to benchmark what a healthy soil is in the context of their own farm.

At the Soils in Practice event at Euston Estate near Thetford in Suffolk, the soil profile under 200-year-old deciduous woodland and the neighbouring “60 acre” arable field were uncovered in soil pits.

In addition, fertiliser company Yara carried out detailed analysis of samples from the brown sand soil at each location and the results can be seen in the table.

At first glance, many of the nutrient levels revealed in the standard test have similar results, with phosphorus, potassium and magnesium all comparable in the woodland and cropped areas. 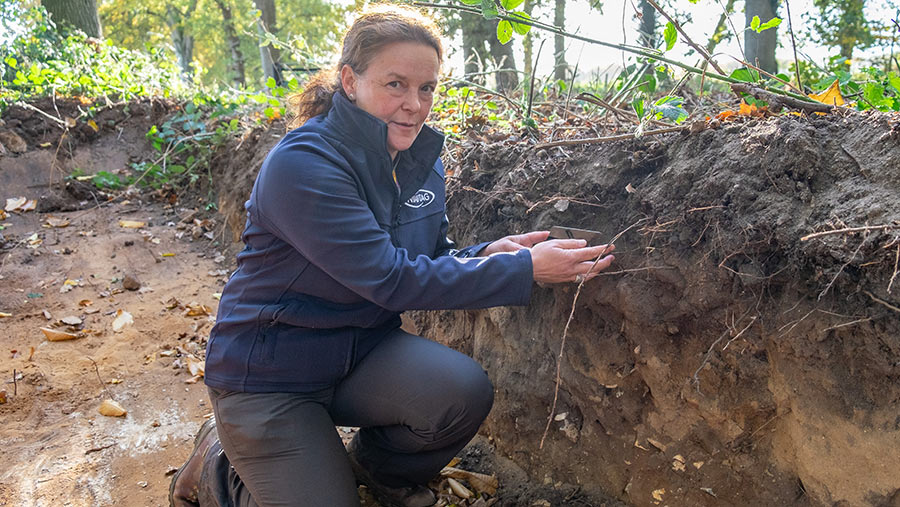 Niab soil scientist Elizabeth Stockdale says the woodland might have been expected to have reduced nutrient levels as it has received no inputs for more than 100 years, but the cycling of nutrients through the leaf litter is managing to maintain extractable nutrient levels.

The data also indicate that the farm is doing a good job at maintaining these key nutrients – even where large amounts of nutrients are removed in harvested crops during the crop rotation – using organic and inorganic fertilisers.

Looking at pH, the woodland area has stabilised at a slightly acidic 5.9, but in the arable rotation has been neutralised to 7.0 by regular lime applications – this is a good target pH for sugar beet which can be yield-limited at even slightly acidic pH values.

So what does this tell us? Dr Stockdale explains that in a very light sandy soil, synonymous with the surrounding Brecklands, a major constraint is the cation exchange capacity (CEC) – or the ability to hold on to plant available nutrients.

As a result, the soil type can’t support an agricultural system on its own, but needs regular inputs to fill up and maintain the soil reserves – as has been done by Euston Estate – and hence the soils can produce good yields when water isn’t a limiting factor.

“Between the woodland and cropped area, the biggest difference we can see is the organic matter levels.

While it is challenging to get up to these organic matter levels on a sand when being continually cropped, it gives an indication of the soil’s potential and gives growers a target to aim for with any soil improvement strategies.

Improving organic matter on these soils will add to the soil’s capacity to hold water and maintain good seedbed structures, and looking at your field edges can give you a personalised benchmark for each field, rather than looking at so-called healthy soils elsewhere.

“Don’t beat yourself up because your soil doesn’t look like someone else’s, says Dr Stockdale. “Look in the bottom of your hedge and target areas [of the field] that look least like what you see.”

Yara’s Jonathan Telfer notes that organic matter in the cropped soil has been depleted over years of cultivation to 1.9%, with sandy soils burning off organic carbon much faster than more bodied soils with higher clay content.

He adds that stopping and even reversing this decline is possible on 70-80% of sand soils, with some of Yara’s customers with similar soil texture to “60 acre” maintaining organic matter levels at about 4%.

This will result in an improved CEC and better nutrient retention, plus increased habitat and food sources for soil biology. This biology then aids nutrient cycling and mineralisation, making key elements more available to crops.

“A boost in biology is linked to a boost in fertility, and a byproduct [of increased organic matter and biology] is improved soil structure, porosity and drainage,” Mr Telfer explains.

“Organic matter at 3-4% is an attainable target on these soils, but as it is harder to retain on sands, it is a long-term job.”

Another part of the analysis from the two soil samples is a Solvita respiration test, which is an option that can be bolted on to a standard soil test to give a snapshot of how biologically active the soil is.

The method involves re-wetting dried soil to create ideal conditions for microbial activity, triggering a carbon dioxide burst. In a sealed container, this is detected by a carbon dioxide-sensitive gel and the degree to which it changes colour determines the biological activity of the soil.

It can be seen from the results that the woodland soil has about three times the microbial activity of the field soil – 215mg/kg of carbon dioxide versus 66mg/kg – which is almost directly correlated to soil organic matter levels.

Mr Telfer says the test cannot replace the spade and visually inspecting a soil, but can be used in conjunction to track the impact of management changes, such as no-till establishment, cover crops, organic amendments or biological inoculants.

“Traditional assessments can identify critical issues, but this can help to see things more accurately and pick up subtle changes over time,” he says.

The test is offered by several labs in the UK, including NRM and Yara’s Lancrop Laboratories, and farmers will pay a premium for the service.

A standard nutrient test would cost £10-£15 per sample while adding a Solvita test would see that increase to £50-£60.

“We would recommend testing at least every four or five years,” Mr Telfer says.

A free online tool developed by European researchers can now help UK growers assess and mitigate the risk of soil compaction, which can significantly dent the productivity of cropping systems.

The creators of the Terranimo tool have incorporated soil type data from a number of countries since it went live in 2016, including Denmark, Norway, France, Belgium and Finland.

More recently, with the help of the James Hutton Institute and Aarhus University, Scottish soils data has been added and it is hoped that England and Wales will be added to the model in the near future.

Growers in some of these countries can select their location and the model will automatically use the relevant soil type.

However, people in countries not yet on the list can manually enter soil physical characteristics such as texture, organic matter level and soil moisture status.

The tool then allows the user to select various bits of farm kit – from harvesters to tractors pulling implements such as balers and slurry tankers – and choose tyre size, tyre pressure and axle load. 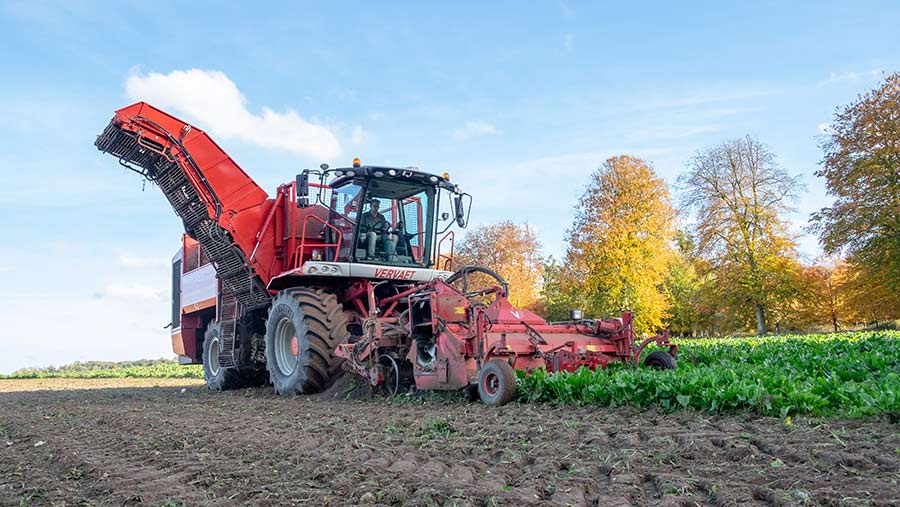 Tyre pressures can have a significant effect on compaction © Jason Bye

It then calculates the impact of travelling across the soil with the chosen machine or combination in current conditions.

The output highlights the vertical stress on the soil and the severity and depth of compaction caused. It is traffic-light colour coded to identify the risk of severe damage to the soil.

At the recent Soils in Practice event, soils experts Blair McKenzie from the James Hutton Institute and Niab Cuf’s Mark Stalham discussed its use in the context of the field where the practical sessions took place.

Sugar beet harvest on the “60 Acre” field was ongoing, with the Vervaet harvester unloading into a twin-axle Bailey trailer pulled by a Fastrac, which was hauling the crop to the clamp on a field headland.

Dr McKenzie explained that the field’s sandy soils had little or no worm activity, along with the absence of a shrink-swell effect seen on heavier soil textures, so compaction was particularly hard to manage.

In this situation, Terranimo could be used to accurately assess the impact of the harvest machinery. For example, when fully loaded with 17t of sugar beet, the 40t harvester was shown to be causing compaction at a depth of 75cm, according to the model.

“As a result, can you go lighter before unloading to limit the soil compaction to a depth where it can be rectified with an implement?” he said.

“You can also look to change axle load on the trailers, which can often be overlooked. Could you use smaller trailers and are you making sure that you are only travelling where you need to be?”

Dr Stalham added that tyre pressures could also play a big part. He noted the trailer being used to haul the beet was operating at 3.6bar (50psi) pressure to allow the operator to travel safely at 50kph on the road.

According to Terranimo, for the example used, reducing that working pressure to 2bar (30psi) while in the field could reduce the depth of compaction by a significant 15cm.

“Modern tyres can now run at lower pressures and although [low ground pressure tyres] might cost more, what cost can you put on compaction on a sandy soil at 50cm, which is a depth that’s difficult to reach with cultivators?” he said.

“Root penetration is more difficult, and what about soil biology? It just won’t be there in the compacted layer.”

Dr McKenzie noted that some Danish farmers were using Terranimo to look at the potential impact of machinery on land rented out for potatoes or silage production, allowing them to influence the choice and timing of machinery operations on their land to avoid costly damage.

“With the model you can ask questions and look at ways to manage soils better by reducing the impact of compaction,” he explained.

In addition to seeing the impact machinery use and setup can have on compaction, Terranimo can also incorporate the impact of increasing organic matter levels on a soil’s structural stability and resilience.

Dr Stalham also highlighted the importance of maintaining good organic matter levels in mitigating compaction, and when using amendments such as organic manure, compost or cover crops, improvements in resilience to compaction can be tracked.

“In the AHDB Rotations Project, we are seeing yield improvements by applying amendments of 3t/ha in potatoes and 1t/ha in combinable crops, but at the moment, measuring few significant physical effects on soil properties,” he said.

Farmers Weekly and our Soils in Practice 2018 sponsors are committed to protecting and improving soil health for the UK’s next generation of farmers and beyond.

An important part of this commitment is putting accurate expert information in the hands of those who can make us of it to improve the soil back on their own farms.

The Soils in Practice conference is an opportunity to bring together top researchers, industry experts and farmers to discuss the biggest challenges around the topic of soil science.

Thanks to our sponsors

Thanks to BKT Tires, Hutchinsons, NFU and Yara for their sponsorship, which enabled us to run Soils in Practice 2018.

Farmers Weekly had complete editorial control of this report.