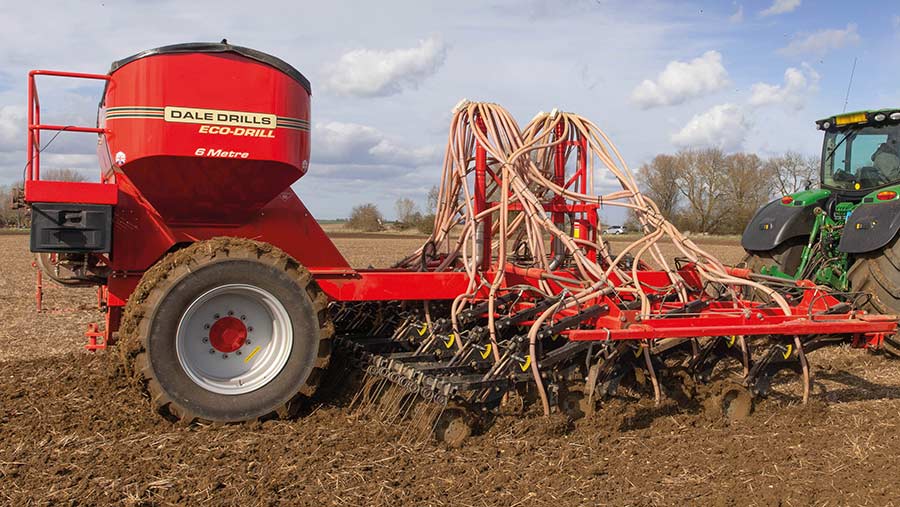 The technology, known as Terramap Carbon, will gauge the level of both organic and active carbon in soils, to help drive forward farm productivity by highlighting the most efficient method to reduce a farm’s carbon emissions.

With the NFU’s target of achieving net-zero carbon by 2040, growers are under increasing pressure to monitor their carbon footprint.

This novel technology, developed by agronomy firm Hutchinsons, aims to provide a platform that growers can use to work towards this ambition.

Until now there has been no accurate means of measuring carbon in the soil.

“Unless you can measure carbon, there is no way it can be managed,” says Matt Ward, Hutchinsons services manager. “How are growers meant to achieve net zero if they don’t know where they are starting from?”

The technology, which accurately and effectively records soil carbon levels, creates the foundation required to calculate a carbon footprint – a beneficial tool to measuring farm efficiency and profitability.

Cost of the carbon scanning service

The Terramap Carbon scanning service is now available to growers at a cost of £35/ha, suggested for use once every five years.

Terramap Carbon is available as a standard or premium service, which forms part of the Omnia suite, and users don’t have to be a Hutchinsons’ customer for its use.

The standard service maps the total organic carbon in terms of percentage carbon and t/ha, 17 micronutrients, soil type, and pH.

The premium service maps both total organic and active carbon percentage and t/ha – that is the percentage of carbon that’s active in the soil, as well as cation exchange and a wider range of micronutrients.

The carbon capture service hopes to drive productivity forwards by identifying specific scenarios so growers can reduce their carbon footprint with the use of more efficient fertilisers, different technologies, better soil carbon management and energy use.

The Terramap technology consists of a unique in-field mapping system that collects data by scanning fields with a lightweight all-terrain vehicle, kitted out with a soil-sampling sensor.

Since the launch of the technology for use in soil nutrient mapping back in 2018, an area of more than 35,000ha has been scanned. The technology has since been updated to establish the new carbon tool, which Mr Ward believes will help reform soil management.

Once the carbon levels are recorded, a profile can be created using the company’s Omnia Farm Carbon Toolkit, which aligns field carbon measures to a range of machinery operation costs.

When it comes to soil carbon, there are two types, which are outlined below:

This is mainly stable and takes the soil centuries to build up and degrade, making it relatively resistant to change. It includes active carbon. This is expressed as:

This is readily disrupted and includes microbes that break down organic matter. It accounts for up to 5% of organic carbon in the soil pool. This is expressed as:

Rather than comparing carbon costs against the current farm standard of ploughing, min- till or no-till systems, users can delve into detailed calculations that incorporate power, width, work rate and fuel use.

Within the management tool, a scenario-planning feature can assess the optimal way to improve farm carbon emissions and project the effects of carbon dioxide and financial performance, accounting for:

“We wanted to move away from just presenting carbon figures on a spreadsheet into a visible and useable format, which can be used for forward planning,” adds Mr Ward.

For example, it might be more beneficial to put more land into the Environmental Land Management scheme and sequester more carbon this way than to replace or change machinery.

Operations can be added to each field throughout the season to build a real-time picture of carbon capture, while fields with the same crop versus different establishment techniques can be assessed to identify cost of and carbon capture levels.

For Mr Wilson, carbon is just another part of the farming system, but the bottom line is that he is a food producer, so managing carbon must fit into this.

He currently farms 260ha of predominately arable cropping, with some permanent pasture for his beef herd, land rented out for potato lets, and winter sheep grazing on stubble turnips.

“We always look at what we do and how we can do better, and carbon is a part of that – how much we do will ultimately be driven by policy – but whatever decisions we make on farm have to be good for us agronomically and economically in the first instance.”

He believes the new carbon service will help growers obtain a baseline measurement to assist them with policy that has a focus on the environment. “It’s all about adapting what we do rather than radical change, and being able to measure what we have is the first step.”

He points out the need for growers to know where they are starting from so they have something to build from and can be rewarded accordingly.

The results of the Terramap Carbon scanning on Mr Wilson’s farm showed significant differences in the carbon balance between the arable and permanent pasture grass fields.

The farm’s agronomist, Sam Hugill, reports the average across the arable fields was about 30t/ha of organic carbon, with the permanent pasture almost double that at 57t/ha.

“Now that we have a baseline measurement, we can look at how we manage our processes to build carbon levels on arable fields, but also to prevent any unnecessary losses of carbon,” says Mr Hugill.

“The carbon management tool allows us to look at these scenarios using real and accurate measurements and then quantify the effect on our carbon.”

“Both Mr Wilson and Mr Hugill are working together to investigate the impact of rotational root crops and the use of cover crops to limit its effect on soil carbon capture.”