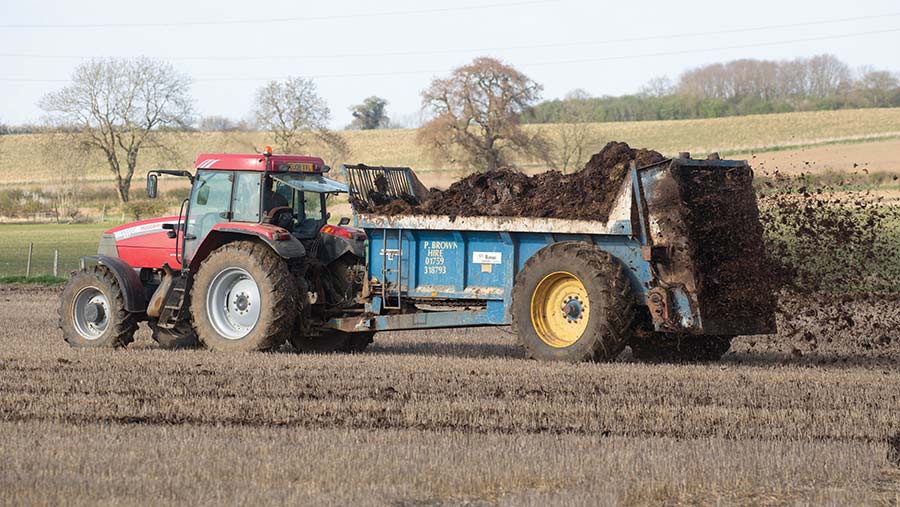 How to measure organic carbon in soils and, even more importantly, accurately measure how it changes over time, are major challenges in the potential development of new income streams for farmers in the next few years.

Globally, there has been a lot of talk about how soils, usually in connection with being farmed regeneratively, could reverse climate change by acting as a vast carbon sink.

The concept is that farmers could be paid for following carbon-storing practices by companies wanting to offset their emissions, creating another income stream.

But the quest to develop these carbon markets relies very much on an unanswered question – how to sample and measure carbon in soils accurately and repeatably?

When, where, how deep and how often you should sample are all a matter of debate among scientists, let alone what method to use and whether there is a finite or infinite amount of carbon that can be stored in soils.

When there is money on the line, answers to these questions will become vital, and much research is ongoing in this area.

There are more immediate reasons to be assessing soil carbon levels though.

If you’re trying to manage something, then you need to measure it to know whether you’re making a difference, explains Cristine Morgan, chief scientific officer for the non-profit Soil Health Institute, based in the US.

“We know that carbon in our soils does make a difference. Soil structure and carbon go hand in hand.”

Dr Morgan highlights that growers want to see if the management they’re doing is changing carbon levels because that makes a difference to yield and profit.

However, while there is a conversion factor – carbon makes up between 50% and 58% of soil organic matter – it is not an accurate measure of soil organic carbon, Dr Morgan says.

Instead the standard test recommended by the Soil Health Institute and many others is the dry combustion method, which is a direct measure of total soil carbon as a percentage.

Some soils also contain inorganic carbon, such as chalk or limestone in the form of calcium carbonate.

“Generally, soils above pH 7.2 need to be tested for inorganic carbon.”

To calculate organic carbon in soils also containing inorganic carbon, typically the soil sample will be split into two, with one sample treated with acid to remove and measure the carbonates, and the other tested using dry combustion.

Plotting percentage soil organic carbon measured by dry combustion versus percentage organic matter measured by loss on ignition from the same soil samples highlights the relationship between them, she notes.

“But also the scatter or variability at the lower carbon levels typically found in our soils, which is why loss on ignition isn’t such a good test to use.” 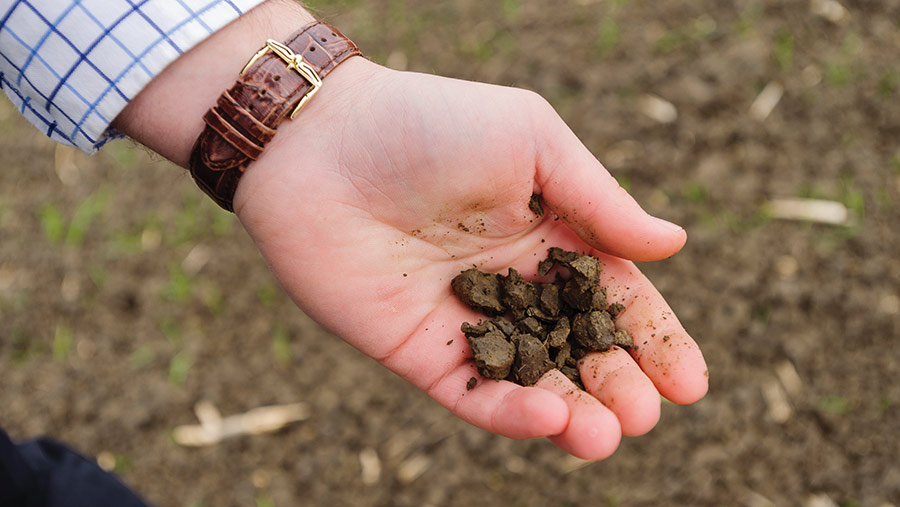 This measure is asked for in some carbon-accounting calculators.

Soil bulk density is measured by taking a known volume of soil, drying it in an oven at 105C, and dividing the dry weight by the bulk volume at field moisture, explains Dr Morgan.

“You then simply multiply the bulk density number by the carbon concentration to get to your carbon stocks.”

When it comes to carbon accounting, samples are usually taken to a 30cm depth, she adds.

“Location is even more important, as you’re measuring change from year 0 to year 5 and need to remove uncertainty over whether you actually have a change in carbon. As uncertainty increases, the credit can get discounted and you get less income.”

For monitoring soil health changes, she recommends taking a composite sample of five to 10 cores from a depth of 0-15cm, carrying out the dry combustion test for soil organic carbon, and doing a bulk density test to help standardise the results.

Timing and place in the rotation are important, she stresses. “If you measure carbon in May, and then two years later in August, you won’t know if any changes are due to management, as carbon can change throughout the year.”

The same applies to rotational place as the previous crop will influence carbon levels, she says. “You want to be consistent on all those things.”

However, while the dry combustion test is the most accurate, it can take at least five years to reliably measure the impact of a change in management, she says. “It’s more of a long-term measurement.”

There are a number of other tests growers can use as indicators of change more quickly.

Three of these – Active C, 24-hour soil respiration and beta-glucosidase enzyme activity – have shown in initial research to be sensitive to showing changes in carbon cycling resulting from changes in management practice, she says.

What are the possible soil carbon cycling indicator tests?

As part of the North American Project to Evaluate Soil Health Measurements, soils on 124 sites were measured across North America using these indicators.

At each site there was business as usual management, and then treatments that had decreased tillage, addition of organic amendments, an increased number of cash crops in the rotation, or the inclusion of cover crops.

For each of the three potential indicators, Active-C, respiration and beta-glucosidase, there was a significant positive difference in the measurement of soils with either decreased tillage, addition of organic amendment and inclusion of cover crops, but not for increasing the number of crops in the rotation, she says.

“It looks like these three indicators for soil carbon cycling are more sensitive to our changes in management so we can see changes more quickly than with dry combustion measurements, which is why they are attractive.”

There was variability in results, she stresses. For example, some soils with decreased tillage did not show a positive change to Active-C.

Further analysis suggests that could be due to either climate or clay content – drier climates or high clay content soils were less likely to show an increase in Active-C, she explains.

“It’s highlighted that there might be some indicators that are better suited to different climates or soil types, but we’re still researching this,” she concludes.

The Soil Health Institute is developing an integrated soil carbon measurement and monitoring system, called DeepC, using £2.5m of funding from the US Department of Energy.

The system combines in-field measurement tools, such as soil probes equipped with sensors that measure both carbon concentration and bulk density of the soil non-destructively and cost-effectively, with an optimised spatial sampling algorithm, and machine learning that will leverage current soil spectroscopy libraries.

The hope is users will be able to obtain rapid measurements of soil carbon stocks to support participation in carbon markets. 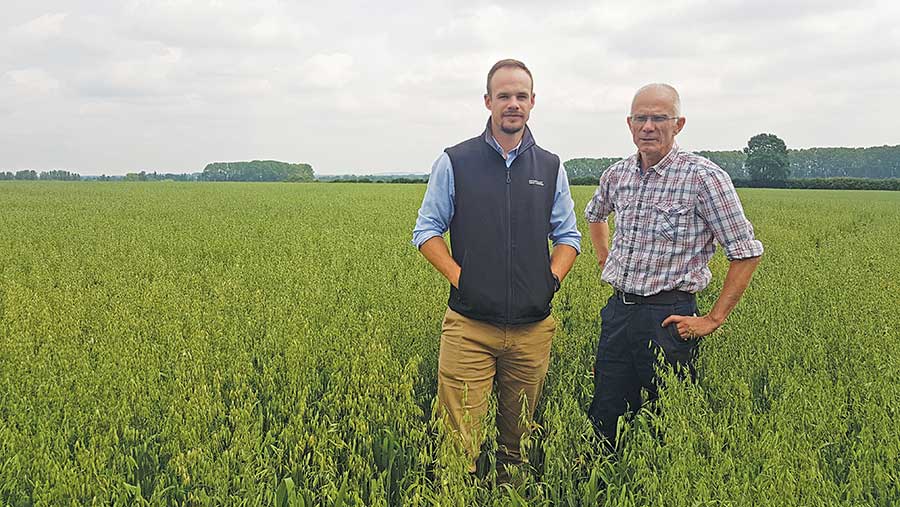 The AHDB soil health scorecard – which measures soil organic matter, pH, nutrients (phosphorus, potassium, magnesium), soil structure through a visual evaluation (VESS) and biology through an earthworm count – is a starting point for many, but he says you need to go a bit deeper to get a proper understanding of soils, which are very complex.

“It comes down to looking at the physical, biological and chemical aspect of soils in as much depth as is affordable and practical.”

He says the physical bit has to be bolted on to to whatever lab tests farmers do by digging a hole and assessing soil structure and counting worms, etc. “It’s important to do that and not rely on one lab test to assess soil health.”

For carbon he has used both loss on ignition and dry combustion.

“Dry combustion (Dumas) is a better measure of carbon, but I’m hesitant to deviate too much away from loss on ignition as it is the industry standard and if a farm has had tests done before it is usually loss on ignition so you have that to compare.”

He tries to avoid converting the results back to carbon as it is a variable test anyway.

“I’m currently doing some soil tests for new clients and will do both tests so we have a baseline for both.”

He is a big fan of the active carbon permanganate test and uses that to give an indication of the proportion of organic matter that is cycling nutrients and providing food for micro-organisms.

“It’s good as it is an indicator of the microbial activity level in the soil and how many nutrients you’re likely to have cycling at once.”

“If you’re on a very light, low organic matter soil, but you’ve got a high active carbon, that’s telling you that you will have to feed that soil a lot of organic amendments to be able to raise that organic matter.”

“If you have a lot of total phosphate and not much available, and your active carbon is low it’s a good indicator that your soils are biologically impacted because a good microbial population helps make phosphorus available. It’s a good tool and helps tie everything together nicely.”