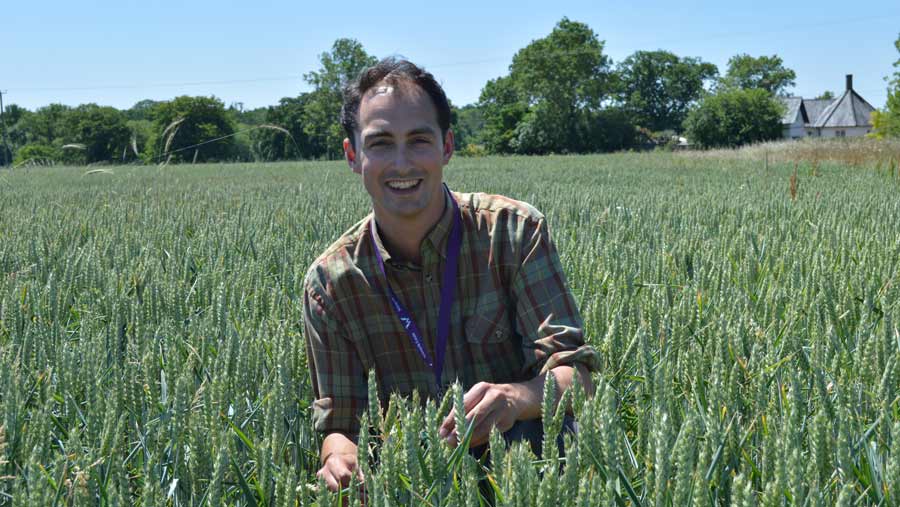 Callum Weir, farm manager at Wimpole, says future ELM schemes are likely to look at carbon sequestration, public access and biodiversity – all elements for which Wimpole is well prepared.

“Reduction of subsidies will have a big impact, but we feel we are well prepared for good ELM schemes,” he tells Farmers Weekly.

The amount of carbon stored in the farm’s soils has risen each year for a decade at Wimpole, soaking up 2,260 tonnes of carbon dioxide a year, and so helping to offset emissions from livestock and diesel fumes.

Over the decade, 2008-18, total organic carbon – which is related to soil organic matter – has risen about 0.14% a year to see average levels on the farm’s heavy clay soils move from 2.01% to 3.43%, which shows a clear sign of improving soil health.

In terms of carbon sequestration, total organic carbon can make up 73% of the total, with woods and overgrown hedges some 24% and field margins 3%.

The farm has the advantage of mature woodlands, while its hedges are allowed to grow tall and wide.

“Soils are a key part of carbon sequestration, and also help reduce the risk of floods and produce healthy food,” Mr Weir adds.

Some of the farm has soils with organic matters of up to 6.5%, but the 300-year old parkland surrounding the 17th century Wimpole Hall has readings as high as 9%, with hedgerows giving organic matter levels of 11.1%.

The rise in organic matter, and hence soil fertility, is driven by a two-year grass ley, a wide six-year rotation, and the aim to plough only once every six years to reduce organic matter loss through oxidation.

So only about 50ha of land is ploughed out of the 200ha under arable cultivation.

The six-year rotation on the 400ha farm, just south-west of Cambridge, starts with the two-year fertility-building ley, which gives grazing for the farm’s 35 suckler cows and 280 breeding ewes, as well as organic silage to use and sell.

The idea is the make the leys “work hard” and put down deep root, and Mr Weir avoids topping, as he believes the plants become lazy and feed off the mulch produced rather than search for nutrients.

A key change has been to reduce ploughing, so after the first cut of silage in June in the second year of the ley, the land is subsoiled and then minimum tilled with a tine and disc combination, and this has proved effective at controlling many weeds.

The ground is then drilled with Siskin winter wheat in late October, and last year the crop produced a “pleasing” organic yield of 5.19t/ha, with all the wheat milled to produce scones for the National Trust’s plethora of tea-rooms.

The next crop is either spring/winter oats or winter rye, with winter oats yielding 5.09t/ha last year and destined to make organic porridge, while the rye yielded 3.56t/ha and goes to make specialist breads.

Mr Weir was keen to introduce a pulse crop for its nitrogen fixing qualities and chose peas as his first crop. In what he admits is a steep learning curve with growing peas, the crop only yielded 1.1t/ha.

Although the pea crop has its advantages, it is a weedy crop, so the plough is needed after harvest. Then spring barley is drilled, which yielded 3.87t/ha in 2019 for organic beer production, while the crop is undersown to grass.

Mr Weir first came to Wimpole for work experience as a 15-year old schoolboy, went on the study agriculture at Nottingham University, worked on a number of farms, and was a trader with grain giant Cargill in Lincolnshire and Switzerland.

He returned to Wimpole some three years ago as manager.

His aim is to make the 400ha arable farm self-funding and profitable in a sustainable way within an overall 1,000ha estate, with a historic house and parkland that sees 350,000 visitors a year.

Profitability compares well with farms using artificial fertilisers and pesticides as the organic 5.19t/ha wheat crop was sold at £295/t. With variable costs of only £198/ha for seed and phosphate fertiliser it gave a gross margin of £1,324/ha.

Organic farms often have high machinery cost to control weeds rather than use sprays, but Wimpole’s net margin over the rotation is £260/ha – including labour, depreciation, and fuel – compared with a group of surrounding non-organic farms with margins only £16/ha higher at £276/ha.

Costs have been kept low, with only two full-time staff on the arable side of the business and four older tractors sold and replaced by two more-efficient Fendt machines, which are shared with the livestock enterprise.

The arable farm made a net profit of £117,588 last year, but is heavily dependent on a Basic Payment Scheme of £65,000 and Higher Level Stewardship of £59,000, meaning a small loss without government support.

But with the switch in farming policy to “public money for public good”, Callum Weir, farm manager at Wimpole sees the farm as well placed to gain from having a sustainability focus, and able to be profitable like other farms.

“With the right support and the right approach, farms can be profitable and carbon neutral,” he says.

Some criticism has been made of livestock emissions in farming and typically those account for 50% of all emissions, with 30% from the breakdown of crop residues and 15% from diesel.

All the livestock on the estate are pasture-fed and graze the extensive parkland surrounding Wimpole Hall, which is the largest house in Cambridgeshire.

“While the livestock are our biggest emitters of carbon, I believe they are the perfect tool to manage the parkland, which is a big carbon sink,” he says.

The livestock also provide an additional income, and allow the farm to use its wildflower meadows to make hay for winter fodder.

“If we ploughed up the 300-year old parkland then that would release 50,000 tonnes of carbon,” Mr Weir adds. 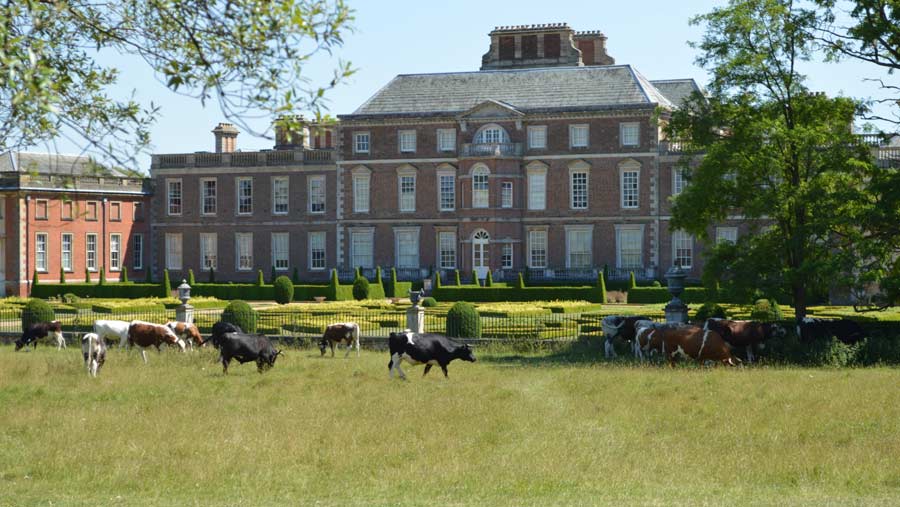 1,000 hectares bought by the National Trust in 1976, the farm has been organic for the last 12 years. It consists of:

In addition the land has:

Wimpole is also involved in the FABulous Farmers project which aims to spread the message about sustainable farming to a wider audience through its website at www.fabulousfarmers.