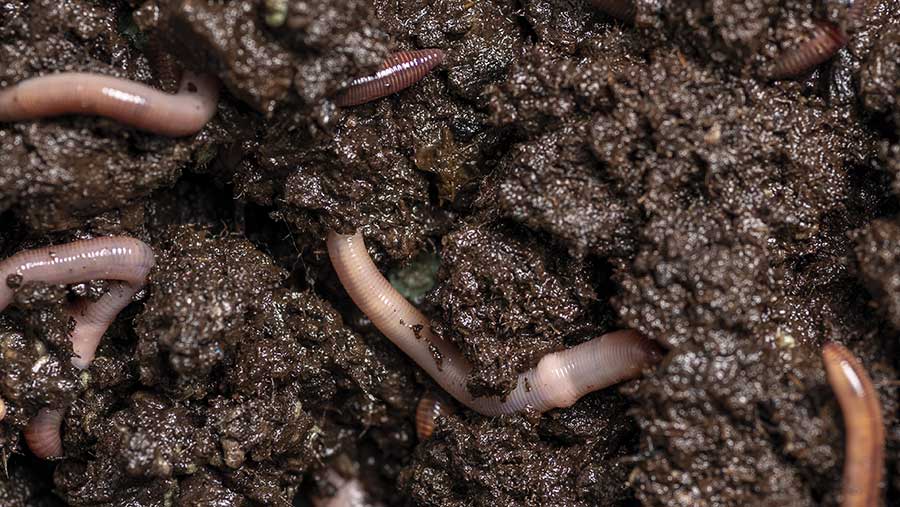 It feels like a perfect storm: the urgency of climate change, the global surge in interest in regenerative agricultural practices and the need for new income streams.

They are all combining to create the opportunity for farmers to help combat climate change by sequestering carbon into soils and getting paid for it.

In arable systems, that’s based on the premise that practices such as growing cover crops and reducing tillage intensity leads to increased soil carbon stocks.

There is good evidence that such regenerative practices are good for soil health through improved carbon cycling in soils.

They also provide other ecosystem benefits such as improved water infiltration and water-holding capacity in soils reducing flooding and erosion risk, and increasing biodiversity.

See also: Soil is key as Norfolk estate prepares for end of subsidies

But some experts, such as the World Resources Institute (WRI), doubt whether the potential for removing carbon dioxide from the atmosphere and storing it as organic carbon in soils is as large as has been claimed.

Such claims include that carbon sequestration in soils could offset 20% of annual global greenhouse gas emissions.

That was based on implementing an aspirational target of “four per 1,000” to increase soil carbon stocks by 0.4%/year set by the French government at COP21 in 2015.

In practice, WRI believes the evidence to actually meet such targets is lacking.

It suggests that 22 methods, of which sequestration is only one small part, within five key target areas could reduce greenhouse gases by two-thirds while still feeding a population of 10bn.

WRI is concerned that the emphasis on sequestration could detract from other, more useful methods to counter climate change.

But despite the scientific concerns about the true potential of climate change mitigation through soil management, the momentum behind the introduction of carbon credit markets globally seems unlikely to stop.

The European Commission is aiming to launch an EU carbon farming initiative by the end of 2021, which will reward climate-friendly practices by land managers.

In its report, Setting up and implementing results-based carbon farming mechanisms in the EU, it concludes that result-based farming can contribute significantly to the EU’s climate change mitigation effects.

Examples could include projects that deliver improved water quality or carbon benefits.

Defra also recognises that further work is needed to develop methodologies to address the barriers of measuring change in soil carbon accurately to support public and private investment – potentially through the development of a soil carbon code.

In the meantime, the private sector is already launching its own schemes, and the prospect of a new income stream is attractive.

In Australia, investors believe an increase of 1% in carbon stocks over 10 years is achievable, says Sam Duncan, founder of Australian startup FarmLab, which provides data support for soil carbon projects.

“The challenge is when you scale that down to offset the costs required to do that at a smaller scale, you erode a lot of the benefits. The costs to implement the management changes to increase carbon on a small scale might be similar to what you can earn,” he points out.

But as in Australia, the nascent market in the US is only just covering costs of changing and that’s creating push back from farmers, Mr Hora says.

Players in the market range from start-ups run by farmers to multinational conglomerates, such as Bayer and Corteva.

In the US, companies such as Nori, Indigo Ag and Cibo appear to be leading the way, but it’s a fast-moving marketplace with new entrants and schemes appearing regularly.

In Europe, Indigo has recently started a pilot scheme in Germany, while closer to home, Gentle Farming and Agricarbon are among companies pioneering schemes.

Most schemes offer payments to farmers based on adoption of new practices such as growing cover crops, reducing tillage or other qualifying practices.

Verification is carried out by physical measurement at the beginning, sometimes during, and at the end of the contract period, or by modelling the likely sequestration of using those practices, or a combination of the two.

Changing practices is the hard part, with, for example, only about 4% of US growers using cover crops, says US farmer Mitchell Hora, who farms 280ha in south-east Iowa.

“Further adoption is being held back by the economic risk and lack of understanding in how to incorporate it into systems.

“You can’t just plant a cover crop and it will be successful – there are a lot of logistics to understand that directly impact on the economics. If you don’t do it right, you can lose a lot of money.”

That’s why some are hoping carbon credits will be a carrot for driving change in practice, which will help create a more environmentally friendly farming system.

Credits in some schemes, but not all, are certified by independent third parties, such as Gold Standard, Verra or Climate Action Reserve, which have developed standard methods for quantifying and verifying carbon credits.

Buyers of such credits include Barclays, JP Morgan Chase and IBM, which all bought credits from Indigo at US$20/t (£14.50/t) in 2020, and Microsoft, which has funded long-term regenerative agriculture projects in Australia and the US aiming to remove 200,000t of carbon dioxide equivalents over the next 25 years.

In most cases, corporations are buying credits to offset their own greenhouse gas emissions in a bid to become net zero.

While some may be able to reach that goal by aggressive avoidance of emissions within their operations, most will not be able to meet that target without participation in carbon removal projects, such as forestry and soil climate initiatives.

Despite that interest, as yet only a tiny number of farmers globally have been paid for carbon credits, partly because measurement is difficult and contentious.

Maryland grower Trey Hill was one of the first to receive a cheque using Nori’s platform, earning US$115,000 (£84,000) for just over 8,000t of carbon credits. There will be plenty of UK growers hoping they can follow suit.

While any practice that increases soil carbon is likely to be positive for soil health, not all of them are actually contributing to removal of carbon from the atmosphere and contributing to climate change mitigation, says David Powlson, a soil scientist from Rothamsted Research.

For climate change mitigation, the practice must remove carbon from the air and store it in the soil, he explains, whereas for soil health, it is the cycling of carbon through the soil system that is important.

Growing cover crops on land that would otherwise be bare is a good example of a practice that moves carbon into soils, but using manures, while good for increasing soil carbon, is not transferring atmospheric carbon to the soil, he says.

“Zero-till is a mixture. A major effect is to concentrate soil carbon near the surface, while there is a bit less further down. In the long term, if you continue for a number of years, you do tend to increase the total stock in the whole profile.”

Storage of carbon in soil is also finite, he says. “It will reach a maximum, and the rate of increase is fastest in the first years, so you have to be careful with quoted rates of increase.”