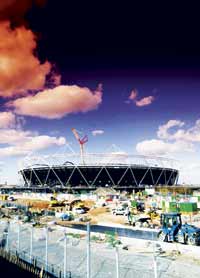 McDonald’s has launched a campaign to promote its use of British produce and British farmers in the lead up to the 2012 Olympic Games in London.

From within the hive of construction activity at what will be the Olympic Village in East London, McDonald’s chief executive Steven Easterbrook, said the company was eager to demonstrate its commitment to British farmers.

“We will showcase the British farms and farmers to raise awareness among our customers, our staff and the public about what British farming has to offer,” Mr Easterbrook said.

“The standards at these farms are so exemplary. We will showcase the quality and welfare standards, promoting the best to ensure that legacy of a healthy farming sector.”

At the moment five farms are scheduled to open to the public in 2010 as part of the Open Farms programme with the first being Richard Hoskin’s Maiden Castle Farm in Dorchester next week.

Beef farms in Scotland and Ireland will follow as well as an egg unit in Cumbria and a Dairy farm in Derbyshire, with other farms producing carrots and potatoes joining the programme in the 2011.

However, Mr Easterbrook told Farmers Weekly the numbers of people visiting farms will be limited.

“We’re really only looking at tens of people purely for the health and safety reasons and to get closer access to the farmer,” he said.

“This isn’t about scale it’s about opening the access to school children and members of the public… there’ll be a range of people on those visits.”

The Open Farms scheme is part of a wider programme that will include a TV campaign promoting McDonald’s use of British produce as well as the company sponsoring agricultural awards.

London Organising Committee of the Olympic Games chief and former Olympic gold medallist Sebastian Coe said the campaign would leave a lasting impression for farmers. “Open Farms will be a legacy for the farming sector through 2012 and beyond,” Lord Coe said.

“While the games are principally based in London, we want to spread the benefits of the games from east to west, urban to rural,” he added.

One in five of the estimated 14 million meals that will be consumed during the Olympic Games in London in 2012 will be sold by McDonald’s.