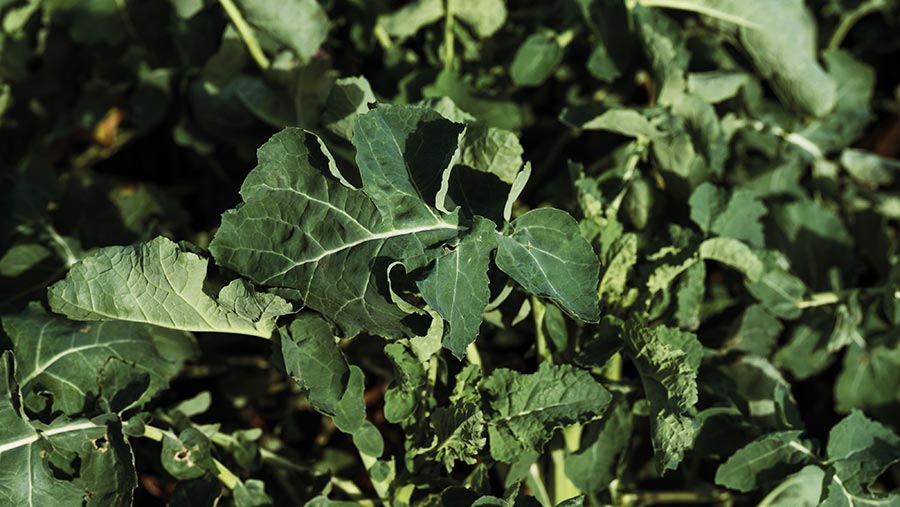 As oilseed rape crops come out of the winter, the positive influences of strong rapeseed prices and good autumn establishment are being offset by rising growing costs.

With spring management about to get under way, growers are being reminded about the potential effects of pigeons and cabbage stem flea beetle larvae before nitrogen rates are reduced on forward crops after the crop green area index is measured.

“There is a good understanding of canopy size and the relationship between green area index and nitrogen, as well as some useful apps for measuring it in the field,” says Colin Peters, break crop specialist at crop consultant Niab.

“But using February results to do this must be balanced with the knowledge that high larvae numbers can still really slow crops down and allow the pigeons to get in. That can change what you need to do,” he adds.

Where pests aren’t likely to be a problem, he is happy for growers to reduce nitrogen inputs to a minimum of 130kg/ha on large crops.

“Keep in mind that we may still have some winter weather to come. Anything that causes crops to open up can have an effect on yields,” he says.

Farmers Weekly spoke to four growers about their plans:

The current holder of the Yield Enhancement Network (YEN) OSR Gold award with a yield of 6.77t/ha, Mark Stubbs aims to build biomass in his hybrid varieties and finds that spring plant growth regulators can adversely affect that, so he avoids them.

Di-ammonium phosphate (DAP) is used at drilling, which supplies 22kg/ha of nitrogen, and he is assessing his 280ha of rapeseed for its additional requirements.

In most years, he applies three equal splits of 70kg/ha of nitrogen, using a total of 210kg/ha. Green area index measurement helps with the first one, which he times to get the crop branching and recovering from the effects of the winter.

Soil mineral nitrogen tests are done every five years and Mr Stubbs uses both a leaf tester and a refractometer to fine-tune nitrogen use. Having reached 85% nitrogen use efficiency (NUE) in his winning YEN entry, he is reluctant to change things too much in 2022.

“Cutting out insecticides and the second sclerotinia spray are on my radar for this year. I will be doing more trapping for pest risk assessments and exploiting the pod shatter and phoma resistance traits in my hybrid varieties,” he says. 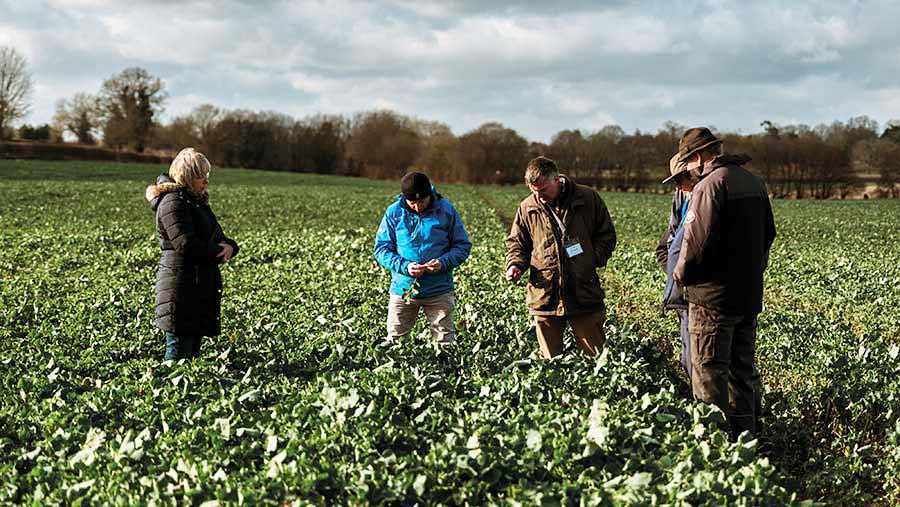 With 75ha of oilseed rape back in the rotation after a three-year break, Velcourt farm manager Nick Down is expecting to make three nitrogen applications in a 30:50:20 split, finishing by mid-April.

With margins in mind as he considers early-season applications, he is taking a cautious approach with nitrogen and will manage the crop that’s in front of him, rather than going by date or previous history.

With establishment being key, Mr Down’s crop also received DAP at drilling – developing the right root architecture and getting early nutrition right are his priorities at that early stage.

From there, soil testing is used to guide nitrogen policy, fungicide use depends on risk and no insecticides are applied. With all inputs under scrutiny, he intends to use genetic resistance and keep a lid on expenditure.

“There’s no blueprint. By knowing what the risks are, I can make the right decisions for this farm,” he says.

Digestate is used as much as possible by Jamie Burrows, who hopes it will replace up to 80% of the bagged fertiliser used on oilseed rape.

He is pleased with how his crops are looking this year, having taken a five-year break from growing oilseed rape after flea beetle problems and disappointing performance.

An early-spring application of 15cu m of digestate was made last week, as part of a plan to apply a total of 160-170kg/ha this season. One block is being treated with the herbicide Fox (bifenox) to control runch, but no other spring weed control is anticipated.

Having progressively reduced soil disturbance since he last grew the crop, Mr Burrows wants to use direct-drilling where conditions allow.

He has decided on a Claydon drill for establishment. He will also be trapping at harvest to understand more about the flea beetle load, so that he can grow oilseed rape with confidence. 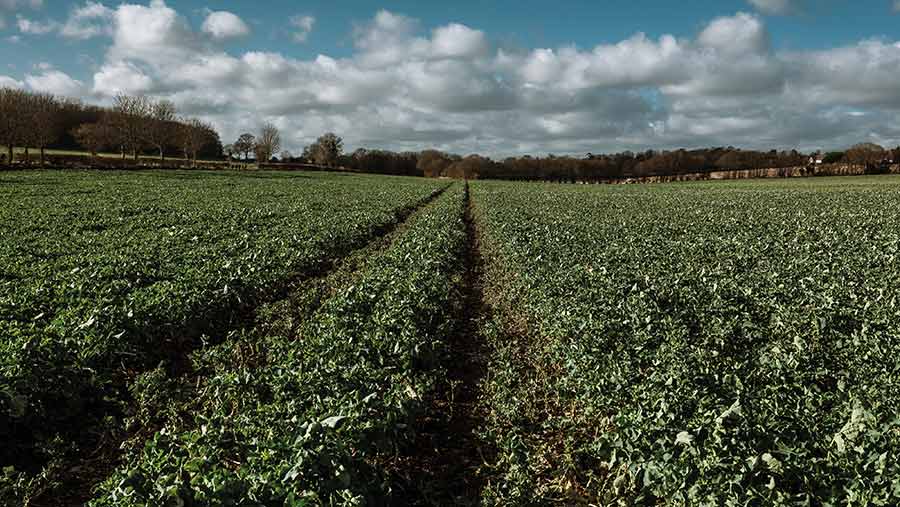 Growing oilseed rape once every six or seven years, after winter barley, is the routine for Will Dickinson, who views the crop as a good opportunity to use soil amendments.

He applies either farmyard manure or digestate to barley stubble, before cultivating and letting it green up. Drilling takes place by 20 August and a total of 180-220kg/ha of nitrogen is applied in most years.

Costs are kept in check, with no routine plant growth regulator or sclerotinia sprays applied. An autumn application of difenoconazole is used for disease control, with checks then carried out in the spring for signs of any further infection.

This year, he is growing the conventional variety Campus. It received Astrokerb (propyzamide and aminopyralid) in the autumn for weed control and had an early mid-February application of digestate.

Insecticides are avoided, mainly because they are ineffective, but also to protect beneficial insect populations. “There are fewer tools available now and we don’t want to select for resistance,” he says.

Learning to live with flea beetle

Work being done using commercial crops of oilseed rape aims to get a better understanding of the life cycle of the cabbage stem flea beetle and its behaviour in the wider landscape.

As Colin Peters explains, even if chemical control options remained, they wouldn’t solve the problem or prevent the pest from adapting to its changing environment.

“There is no cure, growers are having to learn to live with flea beetle,” he says.

As part of the CSFBSmart project, he is building up a detailed picture of the adult pest’s emergence at harvest, as well as larvae counts in the spring, so that effects of crop interventions are clearer.

While it showed that the beetles are emerging when they were expected to, with an August Bank Holiday weekend explosion, some hatched before harvest, others were later.

“We know that they fly off as soon as they emerge, but not how far they go. They’re not feeding on the volunteers. Doing something different with these volunteer crops could change the hatch,” he says.

He is also assessing some 750 crop samples from across the country for larvae numbers, so that the relationship with adult numbers is understood and the effect of different agronomic techniques is explored.

“We asked for crop samples from fields with different drilling dates, organic soil amendments and companion crops, as well as a range of varieties,” he adds.

Preferential movement of beetles into certain varieties will be investigated, as it might allow growers to build some resilience into variety blends.

The project’s field-scale work should lead to better forecasting, so that they understand what the adult beetle load is in their area.

“If you know whether it’s likely to be a good or bad year and what that means for your fields, you can make the right decisions.

“In most cases, establishment isn’t the problem, it’s crop husbandry. Only drill when the conditions are right, as there isn’t anything you can do to a post-rapeseed field.”

Information for this article came from the OSR Future rountable. Thanks to Corteva Agriscience for its sponsorship, which enables us to run OSR Future. Farmers Weekly had full editorial control of this report.

OSR is a vital part of the rotation and Corteva remains committed to helping deliver the tools to ensure the crop has a bright futures.

This year has seen the commercial launch of Pioneer Brand PT303, the first winter OSR hybrid with a claim for sclerotinia tolerance. The latest AHDB trials results show PT303 has given the highest gross output of all Recommended List entries, with a yield of 107%, and that was in trials that are fully protected against sclerotinia.

With an innovative R&D pipeline and fantastic varieties, alongside proven crop protection products such as Belkar, Astrokerb, Kerb Flo 500 and Korvetto, farmers will have the tools they need to maximise the potential of their crops.