GROWERS MUST ensure they replace potash and phosphate removed from the soil in grain and straw this harvest, the Potash Development Association has warned.

Since the early nineties there has been a strong decline in soil P and K balances (see charts below) as growers failed to replace lost nutrients, said the PDA’s Ian Richards.

Over the past five years around 15kg K2O/ha and over 10kg P2O5/ha has been lost from soils every year and in 2002/03 40% of the winter wheat area received no fertiliser potash, he said.

It is vital that growers address this negative P&K balance by making sure they replace what has been removed every year, added PDA’s Chris Dawson.

“You can’t keep milking it [soil]. There is a significant acreage of cereals that don’t receive P or K on a regular basis – this can be a slippery slope to reducing the value of a prime resource.”

Wheat crops require around 250kg/ha of soil potash during flowering and while much of this will be returned at harvest, growers must ensure there is enough in the soil to cover this peak requirement, he said.

Wheat contains about 5.6kg potash per tonne of grain and this can be almost doubled if straw is removed as well, he noted. “Make sure you put back what you take away.”

Soil sampling every 3-4 years, calculation of P and K balances and ensuring the removal of potash in cereal straw is fully taken into account when assessing fertiliser requirements are key steps to addressing the problem.

Growers can find guidelines on calculating P&K removal, soil analysis and the importance of maintaining soil nutrient reserves on the PDA website, www.pda.org.uk

For a detailed guide to sampling soil and pointers on where to have it analysed don’t miss Friday’s Farmers Weekly (August 12).

No account is taken of inputs from manures on these arable crops. 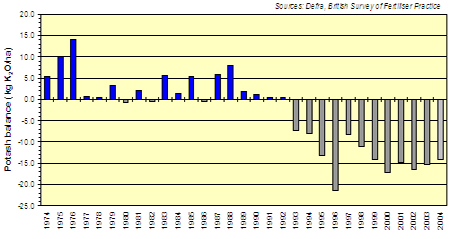 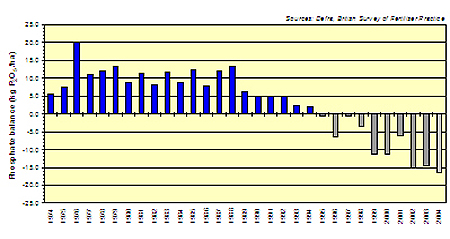