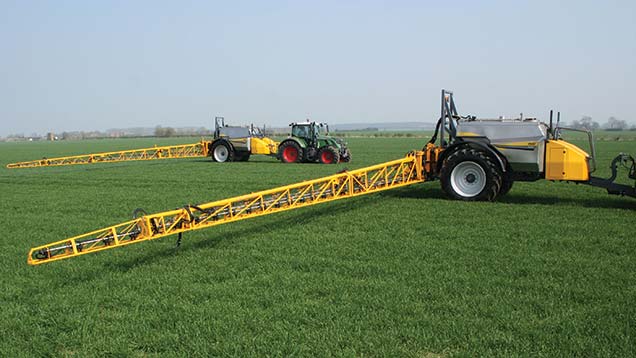 Sprayer operators who appreciate the time- and stress-saving advantages of technology will appreciate the efforts Chafer designers have gone in developing the firm’s latest Guardian and Sentry trailed machines.

Isobus control operated through a tractor terminal is available on base and E versions, but the more sophisticated E-spec machines can instead come with eControl.

See also: Farm machinery dealers: How they’re changing and why

Operators then get a bespoke 7in touchscreen terminal for the tractor and a separate non-touch display on the sprayer, with in-house software delivering more functions than are available with Isobus.

“The Isobus option is a great way of plugging into a terminal on the tractor, but developing our own software for eControl has allowed us to build in extra control features,” says Joe Allen, marketing manager at Chafer Machinery.

Electronic control now extends to the plumbing and induction hopper, which drops down low on a gas strut and is housed under cover when not in use.

“For example, the operator will be able to dial in a boom height for the Contour system instead of setting it by eye, and he will get continuous feedback on the actual height of the boom in work.

“Automation at the end of a spraying session will centre and lock the steering axle, turn off work lights and set the road beacons going,” he adds. “And we’ll have diagnostic functions and remote access to the terminal by our service department to help sort out problems quickly and efficiently.”

Auto GPS section control, air shut-off valves and a multi-function joystick are also part of the E package, together with ePlumbing, a manifold system with electrically-operated master valves.

Selecting a sprayer function on the screen positioned above the filling station automatically selects the appropriate valve positions and flow path for filling, rinsing, spraying, and so on.

“A dilution function for spraying out the last load is another feature of ePlumbing,” says Mr Allen. “And we have laser level sensing for the tank contents for automatic filling to a set volume, and a pressure level sensor for the clean water tank.”

The E versions can also have Chafer Contour boom height control with “SubZero” ability to dip the boom wing sections as well as lift them to maintain correct spraying height over undulating ground, and a choice of boom- and/or chassis-mounted lighting packages to provide illumination for spraying in the evening.

Other features of the thoroughly revamped sprayers being unveiled in the Syngenta Sprays & Sprayers arena at the Cereals event include wider booms with new working width options, improved suspension and more compact stowage.

New stainless steel tanks hold the same amount of spray liquid, but are shaped to substantially lower the centre of gravity for increased stability – especially when exploiting the new 65kph running gear option.

A bigger centrifugal pump for reduced filling time and faster working speeds with liquid fertilisers is also part of the upgrade.