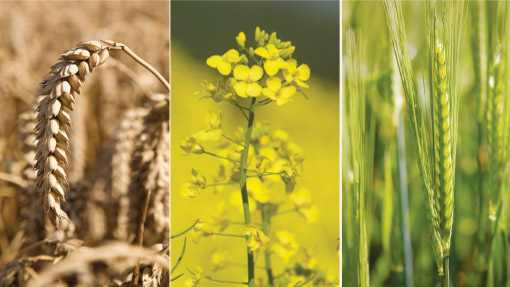 Some 16% of growers are set to be hit by stringent EU legislation especially in north-eastern Scotland, where up to 900 could have to change cropping.

The new rules stipulate that arable areas of more than 30ha must grow at least three crops or farmers face losing 30% of their annual direct payment. This will affect this autumn’s sowings as the rules will be introduced in January 2015.

Under these rules aimed at benefiting the environment, one crop must not exceed 75% of the arable area and two other crops should not be less than 5% each.

Growers worry that they will have to move from their best and most profitable crops to lower margins ones, which will hit profitability on individual farms.

Durham milling wheat champion Stephen Craggs fears he will lose heavily by being forced to abandon his continuous winter wheat and move to spring crops.

Based on area of arable land

His favoured option on his 750ha arable unit is to put 25% of his farm down to alternative crops, split equally between spring wheat and autumn-sown oilseed rape.

But the move to spring wheat would cost him £29,000 in lost income due to its lower yield, while oilseed rape might also hit income.

“We are in the business of producing food, and this is going to make it more difficult,” he says from East Close Farm, near Sedgefield.

The winner of the 2013 Nabim/HGCA milling wheat challenge, he grows breadmaking wheats as they give him the highest gross margin, so a switch to other crops will mean less income and also burning more diesel to tend his different crops.

He is in his 14th year of all wheat and says the new rules will mean that he will have to move into winter barley and either spring barley or spring wheat.

“As a small farm we get economies of scale by growing just one crop to compete with larger units, but with the new rules that just goes out of the window,” he says.

Mr Graves gave up oilseed rape due to pigeon damage, and says spring crops do not do well on his heavy chalky boulder clay land at Hill Farm, Radwinter, some five miles east of Saffron Walden.

Moray Firth grower Iain Green reflects the position of many specialist spring malting barley producers who may have to change to comply with the new rules.

Keith Challen Vale of Belvoir, Leicestershire – Says his heavy land is unsuited to spring crops as it is often too wet early in the year


Jon Parker Near Stratford on Avon, Warwickshire – Has moved to three crops but only introduced winter barley to counter a blackgrass problem


Stephen Graves Near Saffron Waldon, Essex – Will lose his economies of scale if forced to move away from continuous winter wheat


Jono Dixon Sunk Island, near Hull, Yorkshire – Will suffer lower yields if forced into spring cropping and away from continuous wheat


Stephen Craggs Sedgefield, County Durham – Expects to see a drop of at least £29,000 in income to comply with the three-crop rule

He farms 1,200ha of arable and grassland at Corskie, Garmouth, near Fochabers, close to the mouth of the River Spey in three blocks – one of continuous winter wheat, one of continuous spring barley and another of mixed farming.

“We have seen the headline but we need to see the details. This will affect quite a number of farmers around here who grow spring malting barley for the distilleries,” he says.

These farms are close to the whisky distilleries and it would seem “crazy” if barley had to be brought from further afield, he adds.

The Scottish government has estimated that 800-900 arable growers will be affected up the eastern coast from Fife, through Angus and Aberdeenshire to the Moray Firth.

“It will be a challenge the further north-east one goes, as the specialist spring barley growers will have to change,” says Jonnie Hall, director of policy at NFU Scotland.

Further south, Yorkshire grower Jono Dixon is worried about lower yields and returns if he has to change from continuous winter wheat.

His 230ha of wheat at Patrington Farm on Sunk Island, just east of Hull, goes to feed his brother-in-law’s egg-laying poultry unit.

He will have to look at growing winter barley and either spring barley or spring wheat on his low-lying warp land close to the River Humber.

“The whole thing is a puzzle. We can’t do without Europe, but we could do without half the rules,” he says.

Farmer Focus writer Jon Parker has pre-empted any change on his heavy land in south Warwickshire by introducing winter barley into his winter wheat-oilseed rape rotation.

The move at Ragley Home Farms, near Stratford-upon-Avon, was prompted by his need to control blackgrass as winter barley’s early harvest and later sowing give him more time to control the grassweed.

Fellow writer Keith Challen in Leicestershire is on very heavy soil with a winter wheat-oilseed rape rotation and says spring crops are difficult to grow on his soils.

He says the three-crop rule will certainly disadvantage his farming financially in the Vale of Belvoir, where he likes to be drilled up by mid-September for his autumn-sown crops.

Gail Soutar, senior CAP and international affairs adviser at the NFU, says the rules are mandatory with no opt-out clause and will hit 5,000-6,000 farmers.

“[The rules] will be very significant and a range of farms such as small-scale arable growers, contract farmers and block croppers will be affected,” she says.