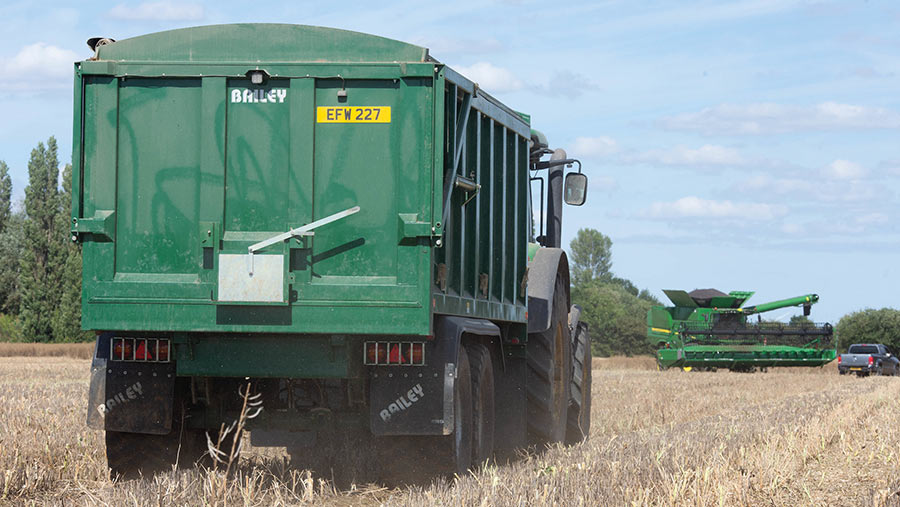 Pooling machinery and even labour between neighbouring farms may sound like a daunting step, but it could be one that puts you on a path to a happier and more profitable future.

Accountant and tax adviser Gary Markham, director of Land Family Business, says that setting up a syndicate, where machinery for two or more arable businesses are pooled, can reduce machinery costs per hectare, which is the key influencer of business viability.

It can also bring significant personal benefits, with many syndicate members reporting that they prefer working with their neighbours, rather than being lonely in their own business.

See also: Advice for farmers on dealing with nuisance neighbours

“Stress and depression are huge problems in farming, and working together with neighbours assists with this,” he says.

A key difference between this model of collaboration and a traditional contract farming agreement is the creation of a new separate legal entity through which to run the joint venture (JV).

Rather than one farmer providing services to another, a new business is set up, which makes its own profit and loss and provides services back to the parties who own it.

Whether this new business operates only with machinery, or also includes labour and other assets, will vary according to the objectives of the venture and how integrated the members want to be.

In JV arrangements like this, the returns to each party are based on the investments they have made.

There will generally be a contract in place between the new entity and the parties who own it, says Julie Robinson, head of agriculture at Roythornes solicitors.

“So, for example, if three neighbouring arable farmers decide to pool their land area and share machinery and staff to benefit from economies of scale, they could each commit an agreed area of land to the venture.

“They would rationalise their respective machinery fleets, with the machinery being transferred into the new JV entity.

“Staff may also be transferred and can then work much more easily across the land area and the JV can then contract farm the land that the parties have committed.”

It’s a model that can also work for the livestock sector, she explains, with an example being where neighbouring sheep farmers come together to manage their grass and pool their ewes.

They could set up a separate JV that pays a grazing fee to each of the farmers who make grass available and a hire fee for each ewe supplied to the company.

The JV’s income would come from the lamb sales, while on the staffing front, the JV might engage a self-employed flock manager.

Mr Markham believes the formation of a machinery syndicate, run in conjunction with a simplified share farming agreement, could be a blueprint for the future of the arable sector.

His firm’s annual benchmarking survey shows that contractors with a contract farming agreement made a £56/ha negative margin from harvest 2019, with rising machinery costs a key factor.

This is not a sustainable situation and tensions between farmers and contractors are likely to increase as Basic Payments reduce.

Pooling enables costs to be monitored and managed, with syndicates delivering machinery costs 40% lower than average.

However, his preference is to keep labour out of the arrangement, keeping staff within the member’s own businesses, but charging any work they do for the syndicate at about £14/hour.

Setting up a syndicate does take time and planning and will require input from legal and tax advisers to avoid potentially expensive pitfalls.

But the basic concept is that the relative arable acreage of each farm is calculated and a percentage ratio is allocated to each farm, with the agreement stating that each farm then funds the required machinery in these ratios.

A list can be drawn up of existing machinery on each farm, along with a current market value, and this is then compared with a list of the machinery needed for the syndicate.

What can be sold, what can be reused and what still needs to be purchased can then be determined.

All the land is put into a simplified share farming agreement, with the returns based on the agreed acreage ratio.

The use of a share farming agreement for cropping avoids any arguments over who should get the use of the combine or drill at a particular time, as the land is being farmed collaboratively.

Pre-empting potential problems such as this is one of the key ways to making a JV work.

Key areas to be agreed

Parties need to be clear at the outset about the aims and benefits of the JV, and this can inform how it is structured and managed, says Ms Robinson.

This is likely to take lots of preparation to agree the ground rules (see “Key areas to be agreed”, above) and will require more professional input than other forms of JV.

“The people side must not be ignored,” she adds. “This will make or break the JV, and who is going to be involved and to what extent can take a lot of discussion.

“Experience shows that having an independent and trusted facilitator or consultant is very useful.”

“An LLP is a sort of half-way house between a traditional-style farming partnership and a limited company.

“Entry and exit, introducing new assets and varying profit and loss entitlements tend to be easier with an LLP.

A key distinction between companies and limited liability partnerships is the way profits are treated for tax purposes, with a company paying corporation taxes on its profits. while in an LLP. the profits of the business are taxed in the hands of the members.

Tax planning
Mr Markham warns that specialist tax planning is crucial, as tax costs can completely outweigh any savings potentially achieved from the JV itself.

The most important consideration is the balancing charges applied when transferring machinery to a new JV or selling off machinery that is surplus to requirements.

Most farmers will have claimed 100% Annual Investment Allowance (AIA) on machinery purchases, therefore the tax value of the machinery on most farms will be nil.

However, when this machinery is transferred or sold, a taxable profit can arise, which usually equates to the value of the machinery.

There are also tax implications for the JV itself.

Choosing a limited company structure for the JV locks all of the AIAs on purchased machinery into the company and it is not available to its members.

“I have come across JV companies with more than £100,000 of tax losses built up over the years that cannot be utilised.

“These are tax losses that if made available to the members would have saved them considerable tax,” says Mr Markham.

“The JV ideally should be a LLP where liability is limited, but the tax is partnership tax and all tax reliefs flow seamlessly through to the members.”