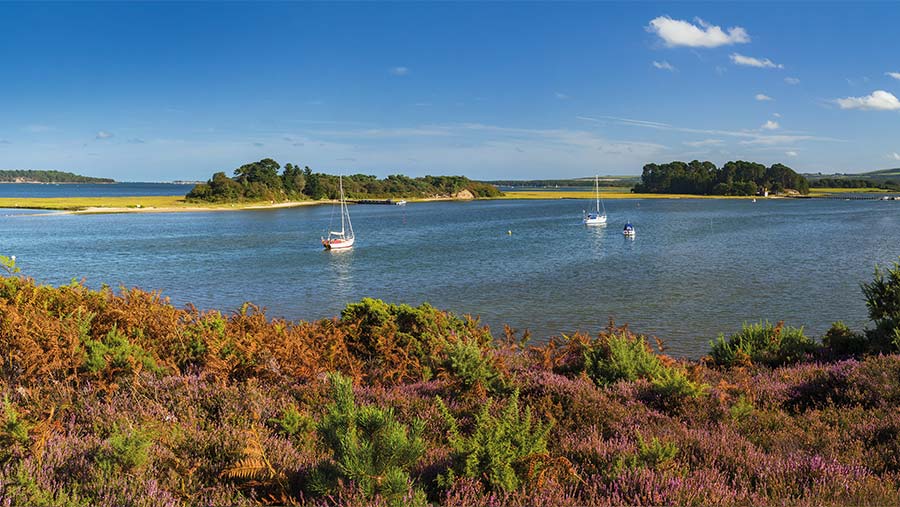 In an innovative solution to protecting wildlife from agricultural nutrients in the Pool Harbour catchment area, farmers are working with the NFU and Wessex Water on a scheme to reduce pollution and also create new income streams.

The scheme, the Poole Harbour Nutrient Management Scheme (PHNMS), hopes to avoid regulation by succeeding in targets using voluntary measures and has received backing and some funding from Defra, the EA and the Esmee Fairbairn Foundation.

We find out how the scheme came about and how all parties will benefit from the measures.

As one of the world’s largest natural harbours, Poole Harbour in Dorset is of international importance to wildlife, being home to a vast array of aquatic and bird life.

As a result, the quality of its water has been a matter for close scrutiny in recent years, as excess nutrients both from agricultural and urban sources have led to a rapid growth of algae, challenging the habitat and reducing the amount of food for birds and fish.

Such was the concern that, in 2015, a group of conservationists, led by the World Wildlife Fund, mounted a judicial review against Defra, saying it was not doing enough to contain pollution.

The Environment Agency (EA) was subsequently instructed to conduct an evaluation and present a “consent order”, setting out its recommendations for further improvements.

In particular, the EA concluded that “the voluntary uptake of agricultural mitigation measures will not meet the required reduction in pollution”, citing a need for “regulatory backing through a Water Protection Zone, or other mechanisms”.

This came as a huge disappointment to the 300-plus farmers in the catchment area, who have a long history of working with the authorities and other stakeholders to try and limit the build-up of nitrogen in local waters.

According to Wakely Cox, who farms near Puddletown and chairs the Poole Harbour Agriculture Group, there has already been a wide uptake of measures, such as planting fodder radish as a cover crop in the autumn to improve soils and absorb nitrogen, and under-sowing maize with grass to reduce run-off.

“We have also engaged enthusiastically with Wessex Water’s EnTrade scheme, which pays farmers on a per kilo of nitrogen saved basis, according to whatever management practices they make to reduce nitrate losses to the environment.”

As well as cover crops and under-sowing maize, the scheme also rewards farmers for converting arable land to pasture and for calibrating fertiliser spreaders.

Despite this, the threat of further regulation remains – and this is something farmers in the area are keen to avoid, says Paul Cottington, the NFU’s regional environment adviser.

A blanket approach through a Water Protection Zone would be disastrous, he says. The reduction targets set by the EA would be achievable for some farmers – lowland livestock producers, for example – but others, including the region’s most productive arable, dairy, pig and poultry farmers, would really struggle.

Instead, the NFU has worked with other stakeholders to develop the Poole Harbour Nutrient Management Scheme (PHNMS).

“What we want to achieve is a sort of ‘buddying up’ of farmers, so that those who find it relatively easy to meet their nitrogen reduction targets can earn ‘credits’, while those who struggle can buy those credits in order to offset their higher levels of nitrogen use,” explains Mr Cottington.

This market mechanism would be able to accommodate seasonal variability, so if in one year the climatic conditions made it relatively easy to achieve credits, supply would exceed demand and prices would be relatively cheap. But in difficult years, there would be fewer credits and those needing to acquire them would have to pay a bit more.

According to Wessex Water’s senior catchment adviser Adrian Moore, the level of buy-in to the PHNMS – not just by farmers, but by the EA, Natural England and Defra – has been encouraging.

“A voluntary approach will give people more choices while, hopefully, delivering the desired end result,” he says. “As well as trading among themselves, farmers should also be able to exchange nitrogen offsets with the water company, and even developers.

“There is a lot to it, and we have to get the governance right, as well as the tools, but it is surely better for all than another layer of regulation.” 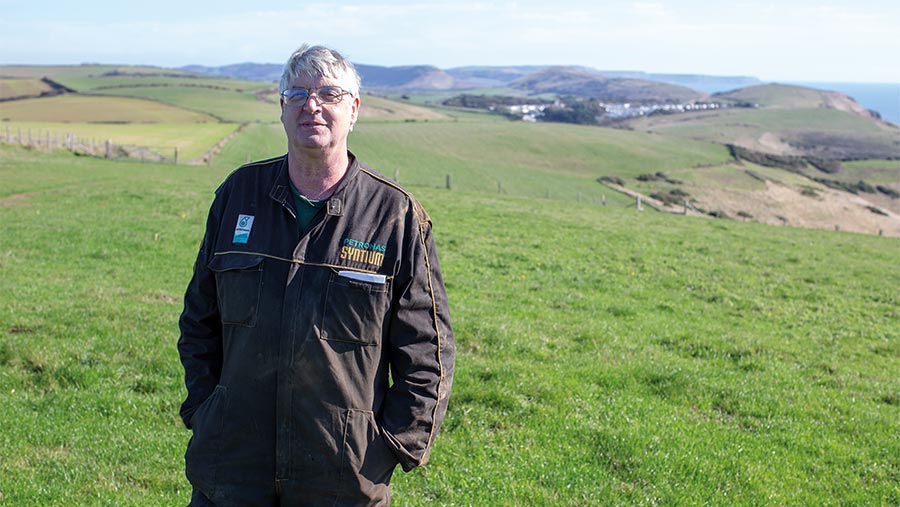 NFU Dorset county chairman Mike Watkins agrees. “This a moment where farmers as a collective are being proactive, not reactive. We all know that when government makes the rules they are often ‘one size fits all’. This is an opportunity to develop a bespoke solution that works for everyone.”

To get the ball rolling, the NFU and other partners had to develop a business case for the scheme, which was presented to government last September.

Earlier this month, the good news came through that the proposal had been accepted and the PHNMS was one of four projects to secure financial backing from Defra, the EA and the Esmee Fairbairn Foundation.

Almost £150,000 has been allocated to the project – money that will be used to develop the governance and assess farm-level nutrient accounting tools and a trading platform through which farmers can buy and sell their nitrogen credits.

A pilot is set for 2021-22, followed by a full roll-out to the whole catchment thereafter. The hope is that a similar approach can be replicated in other catchments around the country.

How would the Poole Harbour Nutrient Management Scheme work?

Developed by farmers and the NFU in partnership with Wessex Water, Natural England, the Environment Agency and others, the aim is to establish a “nutrient bank” as the hub for nutrient credit exchanges.

A nitrate balance would be set for all of agriculture in the catchment, and each farm would then be given its individual nitrate reduction target.

The farmer would use standard software to calculate the impact of different management practices – for example, growing a cover crop, reducing fertiliser use, or changing the timing of application – to help achieve the target, or even exceed it.

Where this happens, the farmer would earn a credit, which could then be sold to another farmer who is unable or chooses not to meet their target.

Farmers would be asked to submit an annual nitrate balance, and can choose to sell any surplus credits.

The total amount of nitrate available to agriculture within the catchment would be capped, and subject to annual reductions.

Voluntary measures are not enough to reduce algae levels in Poole Harbour, so regulation, such as a Water Protection Zone, may be needed to cut nitrogen levels.

An initial target for all nitrate entering the harbour was set at 1,730tN/year, compared with current levels of 2,300tN/year, though this has since been lowered to 1,500tN/year.

Agriculture, which contributes about 73% of non-marine nitrogen, needs to reduce its contribution from around 1,800tN/year to less than 1,200tN/year, equivalent to less than 24kgN/ha.

Wessex Water has already installed nitrogen removal treatment at its Poole sewerage works and is working with farmers to cut its nitrogen loading by 40tN/year, though this may need to be cut further.

Adas modelling cited in the consent order estimated that a combination of agri-environment schemes and NVZs would bring the farming contribution down to 1,680tN/year.

To achieve 1,200tN/year would require all reasonable agricultural measures to be implemented (reduced fertiliser use, cover crops, changes in ruminant diets, wider buffer strips etc) in combination with 380ha of wetland creation.

Without these wetlands, a 45% reversion from arable to grassland and a 35% reduction in stocking rates would be needed.

The EA says farmers should:

How the NFU reacted:

Farmers recognise that nitrogen reductions are needed, but they question the data being used.

In particular, the NFU notes that the highest concentrations of algal mats are in a part of the harbour most closely associated with sewerage treatment works, rather than river inlets.

It also points out that the algal covering has been falling consistently since 2008, while a full survey has not been undertaken since 2011.

Despite improvements in nitrogen loading from agriculture in recent years (of 190-240tN/year), this is not reflected in the data because of high concentrations in groundwater, which take 30 years to get through the system.

The NFU also opposes a blanket approach to nitrate reductions, saying farmers operating different systems are not equally culpable in terms of their nitrogen impacts.

What is a Water Protection Zone?

A Water Protection Zone (WPZ) is a geographic area where the water within it is protected by compulsory measures that go above and beyond what is already in place under existing regulations.

The exact restrictions imposed will be tailored to local circumstances, but may include:

The only WPZ currently in operation is in the River Dee catchment in north Wales, but does not include farmland. Breaches of WPZ conditions can be punished with unlimited fines and up to two years in jail.