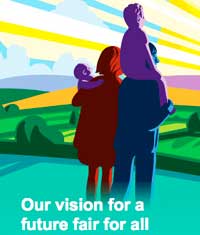 Ensuring fairness for food producers and supporting rural services will be priorities for a Labour government if it wins the general election next month.

Setting out its official manifesto on Monday (12 April), the party said it needed to find ways to balance land use to safeguard food security whilst enriching the environment.

Outlining plans to create a low-carbon economy and tackle climate change, the manifesto says it would push the EU to reduce emissions from 20% to 30%.

The UK’s current target of reducing emissions by 35% by 2020 would also be increased, it says.

Targeting green energy, the party said it would work to develop sustainable bio-energy, while wind power could increase by up to 40 times should Labour stay in power.

In addition to targeting food security and maintaining the natural environment, the party says it will suggest new protected landscape areas, connecting existing sites with green corridors and wildlife networks.

It will also increase the area covered by forest and woodland, it says.

Reiterating DEFRA secretary Hilary Benn’s previous claims that he wants sustainable and profitable farming industry, the manifesto adds the party will continue to push for reform of the CAP to create better and fairer markets.

It will also introduce a supermarket ombudsman and work with industry to introduce tougher and clearer country-of-origin labelling.

Pledging to invest in frontline services for rural communities, the party says it would protect bus services and schools.

The broadband tax on fixed phone lines, which the party was forced to abandon last week, would also be reintroduced to help pay for the roll-out of super-fast broadband in rural areas.

“Rural villages should never be left without essential services,” the manifesto says.

“We will continue to encourage and support imaginative solutions in rural communities to the provision of locally owned services.”


• What are the big issues for you as a rural voter? Tell us on our forums.

• Which words feature most in Labour’s green manifesto?

Farmers Weekly put the party’s food, farming, countryside and environment policies through a programme called Wordle, which picked out the top 20 words used in the manifesto: