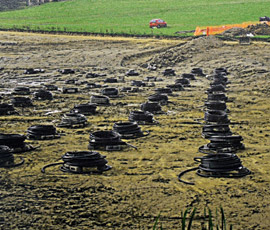 A new finance scheme has been launched to help farmers and other suitable businesses install a ground-source heating system.

The scheme from Ardenham Energy and investors Sun and Soil allows businesses with a high heat requirement – such as a large farmhouse and several converted offices – to get a heat pump system installed for free. Ardenham will install and maintain the system and in return customers sign a long-term lease (20 years) agreeing to use the heat generated at a reduced cost per unit. Owners will also have to pay for the electricity required to operate the system.

Ardenham’s Neil Lawson suggested running costs could be halved with ground-source heat compared with conventional oil-fired or LPG boilers, from 7-10p/kWh to nearer 4-5p/kWh. “The greater your energy use, the greater the payback,” he said.

Equipment is financed by Sun and Soil, which will recoup costs by claiming the government’s Renewable Heat Incentive payments. The firm’s director, Andy Allen, said the true value of ground-source heat pumps comes from the fact that businesses could become largely self-sufficient, and almost entirely isolated from the rising costs of conventional fuel.

The scheme would particularly appeal to off-grid businesses, currently using oil or LPG boilers or electric immersion to generate heat and hot water, that would have struggled to meet the upfront capital cost of a new ground-source heating system, Mr Lawson said.

“Through this finance option now on offer, we can remove any high upfront capital cost and ensure permanently lower fuel bills for many energy-hungry farms.”

However, he acknowledged ground-source heating had to be planned carefully to get the best out of systems and it was not a decision that could be taken lightly.

“It is all about maximising the amount of pipework to make use of the natural heating of the ground. That warming effect doesn’t just come from sunlight. Rain plays a big part in heating the ground, especially in winter, as the average winter rain temperature is 11C. This can provide a huge part of the winter gains to soil temperature, provided the surface is permeable – it’s no use putting systems under a tarmac surface for example.”

He also warned people to avoid systems that extracted too much heat from the ground, as this could potentially result in problems with permafrost during winter. “It’s about achieving sustainable extraction. Our systems extract about 30W/m, but some others can take two-and-a-half times that.”

As a guide, Mr Lawson said a 350sq m farmhouse with courtyard of three converted offices would require a 60kW ground-source heating system. Capital cost for those looking to fund such an installation themselves would be around £85,000, although a return on investment of 16-24% could be expected depending on the complexity of the installation, he said.

Such an example would require around 4km of piping in total running up either side of a trench 1m wide by 1.4m deep. Maintenance was generally very minimal, he said, with an annual service required to check system pumps/ pressures, ground collectors and the antifreeze mix in the system fluids.