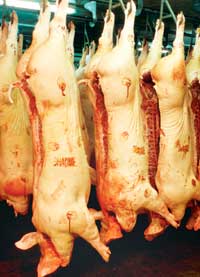 UK pork exports in the first four months of this year were 22% higher than the same period last year, according to latest trade figures.

The Agriculture and Horticulture Development Board report showed the value of fresh, chilled and frozen pork exports rose even further, by 25%, to more than £45m.

“With increased availability, exports in April alone increased by 42% compared with April 2009.” Exports to The Netherlands – primarily bellies and shoulder cuts – jumped from 960t last April, to more than 2500t this April, it added. “Although there have been increased volumes exported to the EU, there has been a 14% reduction in trade with non-EU countries.”