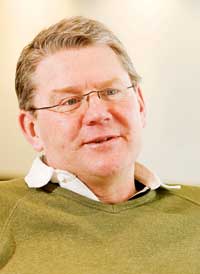 Farm leader Peter Kendall is to run for a third term as NFU president next year. But union rules mean he must win an overwhelming share of the vote to remain in office.

Confirmation that Mr Kendall hopes to continue as NFU leader came when he joked with DEFRA secretary Hilary Benn at the launch of the Campaign for the Farmed Environment that both men were likely to face elections next year.

Speaking later, Mr Kendall told Farmers Weekly: “I said at the beginning of the year that I would stand again for NFU president unless my council told me I was doing a bad job. So far, nothing has changed.”

But complicated rules mean Mr Kendall must secure 75% of the vote from the union’s 93-strong council because he has already served two consecutive terms as president. It he fails to do so, he will be ousted.

Similar rules have been in place since 1946 when the NFU changed its constitution so officeholders could serve indefinitely. “You can serve longer than two terms but on condition of overwhelming support,” explained NFU policy director Martin Haworth.

For the same reasons, incumbent NFU deputy president Meurig Raymond must also secure 75% of the vote to stay in office should he decide to stand again. The rule applies even if neither man faces a challenger.

The vacant position of NFU vice-president is likely to be contested following the resignation for personal reasons of East Yorkshire farmer Paul Temple last March. It remains to be seen whether Mr Temple will seek a return to high office.

The last NFU president to serve three consecutive terms in office was Ben Gill. First elected in 1998, Sir Ben was re-elected in 2000 and 2002 before deciding to stand down from the presidency in 2004.

Office holders will be elected immediately after the union’s annual conference and AGM in February 2010. Candidates must be nominated by 20 NFU members or at a county meeting. Nominations close on 13 January.

Do you think Peter Kendall has done a good job? Are there alternative candidates you would like to see stand as officeholders? Join the debate on the forums.