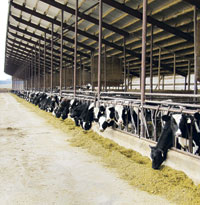 A second Lincolnshire village has been earmarked as the site for another huge dairy herd – this time housing almost 3000 cows.

A trio of Irish farmers hopes to establish a 2896-cow dairy herd close to the village of South Witham, near Grantham. The move comes just weeks after the withdrawal of plans for a similar 8100-cow herd near Lincoln.

The two proposals are entirely separate. Plans for the postponed 8100-cow herd were submitted by Nocton Dairies, a firm backed by three English farmers. But the South Witham herd is being planned by Velmur, an Irish-backed company.

The Velmur address is listed by Companies House as an office in north London. But the company directors are a trio of farmers and businessmen from the Republic of Ireland – Paul Bowes, Patrick Anglim and Michael Walsh.

Mr Bowes, who was educated at Kildalton Agricultural College, expanded his family’s dairy business after taking it on in 1994. He has since chaired an advisory board of Glanbia, the Irish-based international dairy food company.

Mr Anglim has a similar background. He also took over his family’s farm in 1994, which supplied the Centenary Co-operative, Tipperary. Both men then decided to combine their dairy herds while maintaining the independence of the farm units.

Plans for the Lincolnshire super-dairy were outlined by Mr Walsh during a parish council meeting at South Witham on Tuesday (1 June). A public meeting, to which all local residents are invited, will be held in the village hall on Monday (7 June).

The proposals are in their early stages. No planning application has been submitted. The Buckminster Trust Estate, which owns the land on which the dairy would be built, is understood to be open-minded about the idea.

But the plan is almost certain to divide the local community. The village magazine has already described the proposal as a “factory farm” which would have a major environmental impact on the local area.

Local resident Peter Ball said he doubted the local roads could cope with the increase in traffic that the dairy would bring. “I am still trying to find out exactly what will be involved,” he said. “At the moment, we just don’t know.”

Animal welfare campaigners targeted the now-postponed Nocton proposal. It remains to be seen whether the same fate befalls the South Witham plan. But the three Irishmen insist good animal welfare is vital to their success.

• Got a view on large-scale dairies? Have your say and read what others think here.

• What can UK dairy farmers learn from large-scale units in the USA? Read what the Americans think.