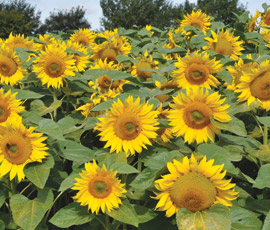 Farmers growing maize for biogas can now include sunflowers in their field margins.

“With around 4,000ha of maize now grown for this purpose, often in areas where maize has not been commonplace in the past, sunflowers are a visually appealing addition to field margins,” said KWS biogas specialist John Burgess.

The company has developed a new strong growing sunflower variety, which can be harvested and ensiled at the same time as the maize in a bid to maximise yield across the cropped area.

“We see it also being used in areas adjoining roads and footpaths as well as field margins or corners, and have selected it for its good early vigour for late spring or early summer planting and its relative early maturity,” added Mr Burgess.

Growers are recommended to plant the new variety – Helawin – from the end of April when soil temperatures are between 12C and 15C and at a seed rate of 70,000 seeds/ha at a row width of 40-75cm.

“With biogas producers likely to plant almost 10,000ha of maize next year in rotation with a growing area of energy beet and rye crops, sunflowers can be a visually appealing addition to this burgeoning biogas crop landscape,” said Mr Burgess.

Could sugar beet be the next energy crop?


Keep up with the latest renewables news