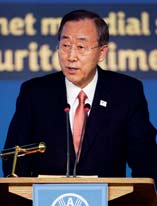 Addressing a major world summit on food security in Rome, EU agriculture commissioner Mariann Fischer Boel said more money – both public and private – had to be pumped into things like transport, warehouses, slaughterhouses and water management in order to lift food output.

But care was also needed to ensure that investments did not lead to regional “land grabs”. “Investments must bring benefits to all parties concerned,” she told the UN Food and Agriculture Organisation event.

“Technology is also needed to produce more food with less,” she added. “As climate change gathers pace, and as water shortages and disease become more serious, we can’t afford to shut our minds to the possible benefits of GM crops with improved resistance to disease and environmental stress. It’s essential that we listen clearly to the voice of science when taking decisions.”

UN secretary general Ban Ki Moon said the current food crisis was “a wake up call for tomorrow”. “Africa’s small farmers, who produce most of the continent’s food and depend mostly on rain, could see harvest drop by 50% by 2020. We must make significant changes to feed ourselves and, most especially to safeduard the poorest and most vulnerable.”

FAO director general Jacques Diouf also called for greater investment to boost production and end what he called “our tragic achievement in these modern days”. “Eliminating hunger requires $44bn of official development assistance a year to be invested in infrastructure, technology and modern inputs. It’s a small amount if we consider the $365bn of producer support in OECD countries in 2007.”

And Pope Benedict XVI told the summit that “access to international markets must be favoured for those products coming from the poorest areas”. “It is necessary to separate the rules of international trade from the logic of profit viewed as an end in itself.”

EU farmers’ group COPA reiterated the call for politicians to provide sufficient funds to boost investment across the world to counter world hunger – including in the EU.

“Sufficient funds must be made available to fund a strong Common Agricultural Policy, in order to meet the challenges of growing world food demand as well as tackling climate change,” said COPA secretary general Pekka Pesonen. “Many producers in the EU in all farm sectors, especially the pigmeat, cereals, olive oil, sugar beet and beef sector, are currently facing major difficulties and have suffered enough.”