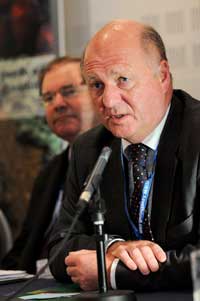 The government will press ahead with a badger cull as soon as “practically possible”, DEFRA farm minister Jim Paice has insisted.

Speaking at the Devon County Show on Thursday, 20 May, Mr Paice said DEFRA would not wait until trials in Wales were concluded before pressing ahead with plans for a targeted cull of diseased badgers in bovine tuberculosis hotspot areas.

“We have a huge challenge and the coalition government is determined to take agriculture forwards – we are determined to tackle bovine TB and will do so as soon as we practically can.”

However, it would be foolish to think that a cull would be accepted without judicial challenge, so it was important to underpin the project with a scientific base, he added.

“We can’t just start issuing licences for people to start culling badgers.” Instead, DEFRA would use existing science and experience from other countries such as Ireland to design a complete and integrated TB plan, he said.

“We’re going to be working on that in the next few weeks.”

Melanie Hall, south-west director of the NFU, said Mr Paice had told union officials that a cull would be in place within a year.

“There is enough science to underpin it – we can’t wait for any more. It is too easy to keep using science as an excuse but we need to move forward with an eradication plan – we cannot delay,” said Ms Hall.