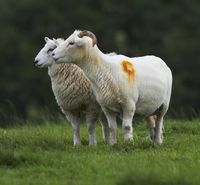 Further changes to the rules relating to bluetongue have resulted in the renaming of the former control and protection zones as the protetion and surveillance zones respectively.

This cosmetic change is though just the tip of the iceberg, explained NSA chief executive Peter Morris. “Anyone now wanting to move stock to slaughter outside the zones has to notify Trading Standards 72 hours before moving the stock. This will efffectively make it impossible for stock to move to slaughter outside the bluetongue zones through a market, they will have to move direct from farm to abattoir.”

But these rules needn’t have been implented in this way, he said. “These are DEFRA’s interpretations of EU regulations and I don’t believe they had to be done this way. As I understand it there is no need to report the movement so precisely in advance. It seems this has been rushed through and we will be challenging DEFRA to make the rules more workable as soon as possible.”

It is believed a number of abattoirs are having to operate at well below capacity because these changes were announced late on Friday, leaving producers and abattoirs little time to implement them.