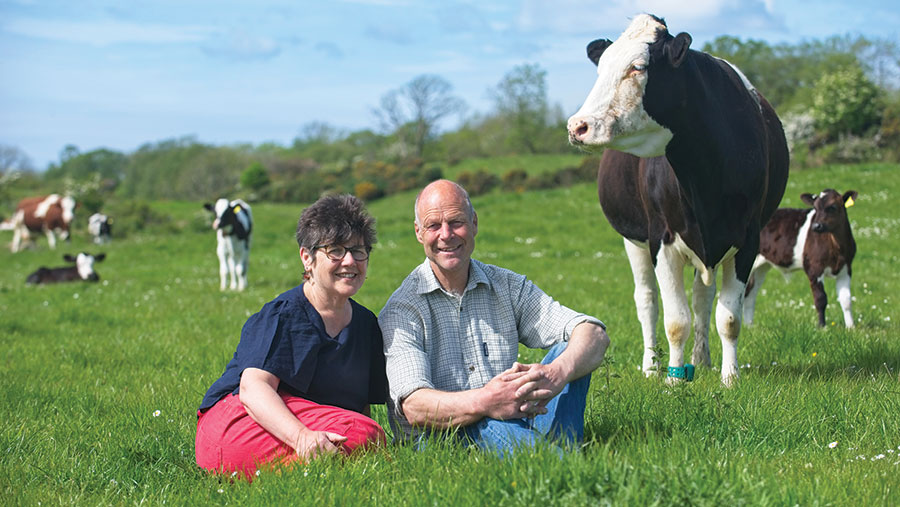 Mainstream dairy farming requires that calves are separated from their mothers soon after birth, but one farm business, the Ethical Dairy, is employing a more natural route.

David and Wilma Finlay use a “cow-with-calf” method of dairying, where both males and females stay with their mothers 24 hours a day for six to eight weeks, allowing them to suckle.

After that, the calves are slowly weaned, starting with overnight separation and building up to 16 hours of separation a day.

This way, says Mr Finlay, when the youngstock are eventually weaned at around five or six months old, both cow and calf hardly notice the difference.

The Finlays first started trialling this system on their Rainton Farm, Castle Douglas, in Dumfries and Galloway in 2012.

Although they have only recently committed to the new system, the Finlays can trace the beginning of their journey all the way back to 1999, when the farm first made the switch to organic.

While this transition initially cost them about a 30% drop in productivity, this was gradually recouped, which spurred them to question industry-accepted red lines and what they knew about “good farming” methods.

Eventually, ethical considerations, coupled with visits to small cow-with-calf operations in the Netherlands, prompted the Finlays to take the plunge.

Their initial trial in 2012 involved just 37 cows and was halted after just six painful months.

But following a revisiting of the model and refinancing, the Finlays embarked on a full-scale, three-year pilot involving 100 cows.

This year, the farm is set to reach its target stock capacity of 135 cows. Mr Finlay admits it has been a steep learning curve.

For example, while traditional dairying sees separated calves reared on 250 litres of formula milk and/or discarded cows’ milk, a calf suckling its mother for five or six months will drink 2,000-2,500 litres of milk, even if the cow is milked once a day.

Disease was another major obstacle. In conventional systems, separating calves from their mothers helps prevent transmission from the disease-tolerant cow to the very vulnerable calf – particularly when indoors.

But in the new system, calves were exposed to illnesses that the Finlays had never struggled with before, such as cryptosporidium and pasteurella pneumonias.

“It was pretty horrendous,” remembers Mr Finlay. “I was ready to pack it in after three months.”

“But working closely with our vets, who have been great, we developed tighter disease control protocols and all our calves are now off to a great start,” Mr Finlay David.

“It’s a longer game now. Although the calves have taken away on one side, they’re contributing at the other end.”

The Finlays herd is based on a three-way cross of Holstein, Swedish Red and Montbeliard.

The cows are kept in two groups – one calving in October/November and the other in March/April.

Calf suckling does delay oestrus, so they now use a teaser bull to counter this.

On the advice of their vet, the Finlays also make sure to pad the calves’ immune system, by giving them a top-up of stored colostrum – rich in antibodies – two or three hours after birth.

They have been cryptosporidium free for the past two years.

The cows are milked just once a day while the calves are still with them, switching to twice a day once they are weaned, though they slip back to once-a-day milking around eight months after calving.

This low-stress approach encourages longevity, with the average age in the herd at nine years old.

The bull calves are all retained, and fed an organic, cereal-free diet.

About half are slaughtered locally at eight to 10 months for ruby veal, with whole carcasses sent to London butchers and restaurants.

The other half are finished at 16-18 months, going direct to abattoir.

Adapting a conventional set-up to a cow-with-calf arrangement has taken considerable investment.

While cows are out at pasture for as long as possible, when they are inside the housing includes mattresses for sleeping and resting, and plastic wand dividers rather than metal bars to let the cows and calves spread out.

The parlour is a 10-10 auto-tandem, which has individual cubicles for milking, with the clusters attached from in front of the legs rather than behind – a more natural arrangement.

There is a strong emphasis on calving box hygiene and water cleanliness – and environmental inoculation is used, flooding the housing area with “good” bacteria, to counter any pathogens.

When weaning is complete, the cows are still kept in close proximity to their calves, separated by a single bar, which allows contact, but not suckling.

“The calves are making leaps and bounds in growth,” says Mr Finlay.

“The Angus bull calves are growing at about 1.5kg/day, which is more than twice what they were before, and the heifers are putting on 1.2kg/day.

“What we are doing is not unique,” he adds.

“There are other dairy farms practicing some or all of the elements of our sustainable production system. However, it seems we are operating at the largest scale in the UK, and probably in Europe.”

Eight years after embarking on this project, the Finlays say their business is finally breaking even.

“The upfront capital costs of infrastructure changes and the initial loss of production was quite substantial,” says Mr Finlay.

Keeping calves at foot also led to a drop in milk yield of about 30%.

But by increasing numbers from 100 to 135 cows, the herd is still producing about 540,000 litres of milk a year, which is available either for sale or for processing in the farm’s new cheese dairy.

The extra head count also means there are another 30 calves to finish and sell.

Income is boosted by careful branding, with The Ethical Dairy range of cheeses positioned at the premium end of the market, in line with organic artisan cheese, priced from £17.50/kg to £30/kg.

Part of the Finlays’ sales are to cheesemongers in London and central Scotland, though a growing amount comes from their online cheese shop.

“The advent of online shopping and next-day delivery has allowed small, remote producers and processors access to national and international markets, bypassing the traditional route to market,” says Mr Finlay.

The Finlays recognise that The Ethical Dairy’s products appeal to just a segment of the population who care about where their milk products come from.

“It’s no panacea, but does offer an opportunity for family-sized farms to add value while addressing a small but rapidly growing market segment,” says Mr Finlay.

Meanwhile, the ruby veal is sold to retailers who are particularly interested in supporting sustainable and ethical meat production, for example, online retailer Farmdrop and London-based The Butchery.

The Ethical Dairy also supplies its own luxury ice cream.

As part of their drive to build bridges and raise awareness, The Ethical Dairy will be holding a farm tour in May specifically designed for vegans and vegetarians.

The one-off event has been developed in response to requests from members of the public for more information about farming and will include cheesemaking workshops, a milking viewing and a tour of the farm.

“This event is about breaking down barriers and recognising that there are many different reasons why people make the dietary choices they do.

“As producers of food, we are respectful of the choices our customers make,” says Mrs Finlay.

The Farm Tour for Vegans takes place on 21 May at 11am at Rainton Farm.

It costs £30 per person and includes a vegan lunch.

The Ethical Dairy is one of a number of rural projects that was recently awarded a grant from the Knowledge Transfer and Innovation Fund, delivered by the Scottish Rural Development Program to encourage sustainable farming.

The majority of the £60,400 in funding (from a total pot of £340,000) will go towards a year-long investigation into the cow-with-calf system, with the aim of extending it to other farmers.

“The Finlays are an ideal case to look at because they are doing the cow-with-calf method at scale,” says Dr Marie Haskell, who is leading the research.

“The main objectives will be to carry out market and economic analyses, and to broadly determine what opportunities and barriers to entry exist for carrying out the method at a commercial level.”

A large part of the investigation will be questioning other farmers to determine what factors may motivate or discourage them to consider implementing the method.

It will also be trialled on other farms with the aim of establishing a blueprint that could be adopted by any interested farm.

“A step in the right direction” or “too soon to tell”? What do you think about the cow-with-calf system?

Share your views with us by writing to the editor at farmersweekly@proagrica.com or emailing philip.clarke@rbi.co.uk