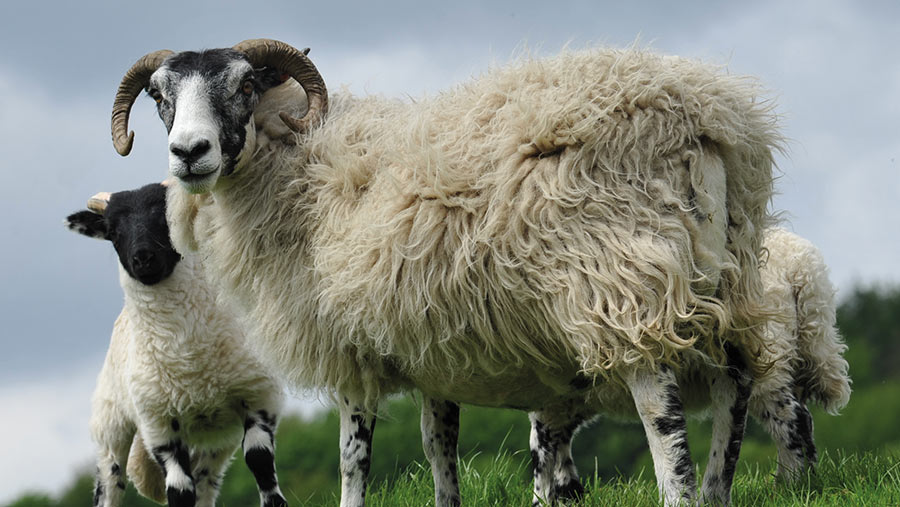 Hill farmers could tap into new markets for lighter carcasses by intensively finishing lambs to a deadweight of 12-16kg.

With producer groups in Ireland already supplying up to 30,000 lighter lambs annually for export to southern France and Italy, as well as to domestic food retailers, there is potential for UK hill sheep farmers, too.

The biggest challenge with this system is achieving sufficient fat cover to meet market specifications.

Michael Diskin and Frank Campion are leading trials at the Irish research body Teagasc into the most suitable finishing options.

Here they advise on the key considerations for hitting targets.

With lambs typically weighing only 22-26 kg at weaning, an intensive high-energy finishing diet is needed to get an acceptable fat level and finish them in a short time span.

For all-concentrate diets, ensure the ration is formulated for intensive feeding to store lambs.

Allow a couple of days to train lambs to eat concentrates. Then offer 300g a head a day and increase by 200g a head a day every three days until ad-lib feeding is achieved.

“A lamb with a good appetite will perform extremely well,’’ says Prof Diskin. “Be very relaxed with the feed initially and introduce it gradually so that there are no metabolic issues.’’

Ensure that feed is always available and that there is constant access to fresh water.

Provision of quality silage, hay, or straw as a source of roughage is vital.

“They will eat very little of this, but it is very important,’’ he says.

Include 0.5% or 5kg/t ammonium chloride in the ration to prevent urinary calculi which can result from feeding high levels of concentrates.

The ration must be 7% crude fibre and be formulated with the correct phosphorous level, again to reduce the risk of urinary calculi.

In the Teagasc study, feed efficiency was poorer and the kill-out rate around 1% higher for castrates than for rams.

Good flock management is needed to keep mortality rates low and ensure lambs are drafted at the correct weight so they have sufficient muscle and fat cover to meet market specifications.

Good animal husbandry will identify shy feeders – they will stand in a corner and have a hunched appearance.

“There will be approximately one lamb in every 100 that you will have feeding issues with,’’ Dr Campion points out.

“The best approach with these lambs is to turn them outside again. Generally, after some time on grass and after being trained to eat concentrates at grass, they can be housed again.’’

Pen group sizes should be guided by requirements for sufficient floor and feed space and easy access to water.

Weigh lambs fortnightly: “Some can get too heavy very quickly, so it is important to weigh and to check their fat and muscle score,’’ Dr Campion recommends.

“A degree of training is needed for this: the fat and muscle depths are very different to the requirement for store lambs.’’

There should be a nice rounding of the transverse processes in the lumbar region: if the processes feel sharp, the fat covering is inadequate.

Pasteurella pneumonia is the main cause of mortality in this system, so vaccination is non-negotiable, even though these are short-stay lambs.

Ideally, lambs should be vaccinated before housing, or, at the very least, at housing if lambs are being purchased and housed immediately, says Prof Diskin.

If there is access to good-quality grass, don’t house until two or three weeks after the booster has been given.

Because of the short finishing period, note the withdrawal periods for long-acting treatments such as flukicides and dips.

Regular weighing will avoid lambs falling out of the specification for the light lamb trade or being under-finished for “French specification” – that is, a carcass of 18kg or heavier with an upper limit of 21-23kg, depending on the time of year and market demands.

Where lambs are too heavy for the light lamb market, or they reach the correct live weight, but have insufficient fat cover for market specification, they will need to be carried to a minimum of 42kg to finish for that market.

A covering of fat is essential to prevent the carcass turning black when chilled.

Scottish Blackface is the ideal breed for this system, but some strains within the breed performed better than others in the Teagasc trial.

“We have noticed a subtle difference, with the Lanark and the Perth growing better than other strains,’’ says Prof Diskin.

Cheviots and Welsh Mountains could also be suitable.

“The Cheviot would have the best kill-out rate of all hill breeds,’’ he adds.

Buyers are limited in this new market, so it is important to have a supply contract in place before embarking on the system.

Producer groups have been integral to market development in Ireland and have secured supply contracts with processors for export to southern France and Italy.

“In the beginning, the meat industry was dismissive of this system, but Kepak took up the initiative and others followed,” says Prof Diskin. “There are now a good number of factories interested in them.”

Some are also being sold to supermarkets in Ireland: “They are sold as high-priced cuts such as racks of lamb, and as small roasts, but good use can also be made of the less valuable parts such as the front leg – I’ve seen these being sold at 1.5kg in Ireland.”

Do your calculations: if trade for store lambs is good, selling lambs into this market is as good an option, says Prof Diskin.

“If it’s poor, giving them an extra three-to-six-weeks of feed and finishing them intensively instead should give you a margin of £13-£17.’’

Scottish Blackface lambs were housed after weaning at an average live weight of 25kg and slowly built up to ad-lib concentrate intake.

Wethers were drafted for slaughter once they reached a minimum of 30kg liveweight, and ram lambs at over 31kg liveweight; fat cover level was equivalent to fat score 2 post-slaughter.

During the finishing period lambs ate around 1.15kg dry matter of concentrates a head a day once they were eating them ad-lib.

Lambs that reached 36kg liveweight and were deemed “unfinished” were retained and finished to “French” market specification (>18kg carcass weight); this was more common in ram lambs.

Approximately 15% of the lambs initially housed to finish as light lambs were sent for “French” market specification, showing the importance of regular live weighing and handling.