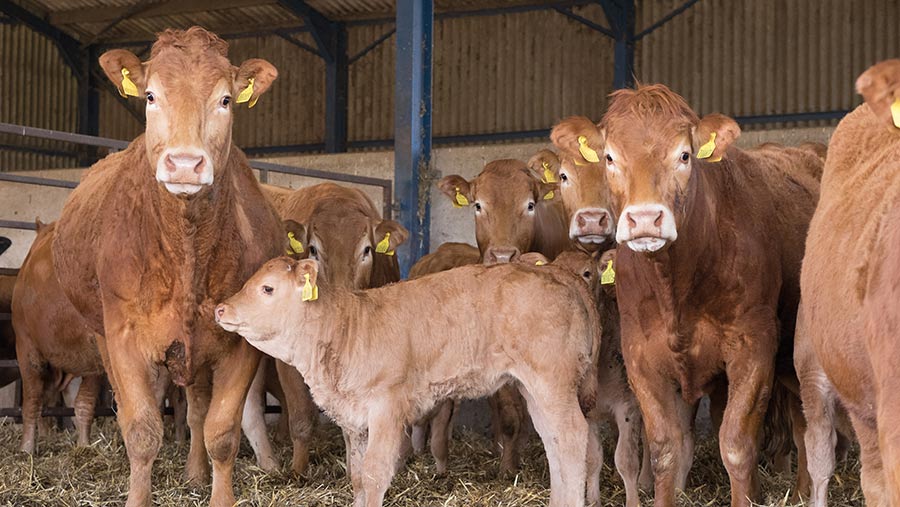 Relying on quality forage alone to support spring-calving cows in late gestation can lead to mineral shortages and a rise in fatal bacteria pneumonia in young calves each spring.

Simple hay and silage diets are cost-effective but can be short of key minerals, depending on how trace elements are balanced in the soil on your farm and the forages produced.

Farm Post Mortems, based in County Durham, sees a spike in calf deaths each spring due to complications around copper and selenium deficiency at two to six months old.

Pneumonia tends to be associated with the autumn, but a lack of trace elements can leave suckling calves immunocompromised in the spring.

How many head of cattle do you have on your farm? This should be a simple question to answer.

Most people will include cows, bulls, followers and youngstock. But there is one class of animal on the farm which is just as important and is easy to overlook – calves in the womb.

These are every bit a part of the economic health of the farm as calves on the ground and the cows which produce them.

They can also suffer from a range of viral, bacterial and nutritional diseases.

So it is worth asking your vet and nutritionist to consider how the gestating cow and calf can best be fed to equip the calf for the outside world.

Why the problem starts with the cow

Compared with some classes of stock, suckler cows have a reasonably easy life. They have to produce one calf a year and rear it to six to eight months old.

Assuming they get back in-calf within three months of calving, they can then have a three- to four-month holiday before calving again. But are we right to think of this as a holiday?

Even at 30 days pre-calving, a pregnant suckler cow requires about 90MJ of metabolisable energy (ME) a day.

She can eat about 10kg DM, so even allowing for some wastage, this can often be supplied by even pretty moderate silage alone.

This is usually fine in terms of energy and protein supply. The temptation is to take that word “alone” very literally, and many people do this.

However, suckler farms are often on marginal ground so there is a risk of serious mineral deficiencies. This means the cow’s diet is unable to supply the cow and/or the calf embryo with their full trace element requirements.

It is important to consider how best to provide the trace elements – particularly copper and selenium – for the calf while it is in the womb, but more importantly for its first few months of life.

So the best time to supplement cows with minerals is when they are pregnant (probably 5-7 months is best) and not once they have calved.

If you do this, you are getting more bang for your buck as you are giving mineral to the cow and the calf at the same time.

A bolus is always the most reliable way to supplement a suckler cow: I have seen deficiencies in cows and calves when other methods (lick buckets and powdered minerals) are relied upon.

It should also be said that if a TMR is properly mineralised or if bought-in mineralised cake is fed, this will usually solve trace element problems.

Trace element deficiency in cows is unlikely to cause abortion, and its role in stillbirth and reduced “calf vigour”, while conceivable, is not completely proven.

The practice of injecting all calves at birth with selenium for “white muscle disease” could be justifiable in some cases, but there is a risk of selenium toxicity and this should probably be done with caution.

Injecting is almost certainly unnecessary if the cows have been bolused.

White muscle disease is quite rare in practice and occurs much more commonly in calves after turnout, where it is triggered by high levels of oxidants in lush grass.

What is more likely to be seen is immunocompromise as a result of deficient levels of copper and selenium in older calves (two to six months old), as whatever stores of selenium and copper they got from their dams begin to run out.

This manifests as diseases which should not be fatal, causing deaths in calves only because their weakened immune systems cannot fight them off. One example is bacterial pneumonia.

The graph above shows a seasonal pattern of bacterial pneumonia in suckler calves throughout the year.

As expected, most of them occur during the housed period (green bars on the graph).

However, a small but significant number of cases occur when calves are out at grass. In most of these cases, liver testing of these calves shows low selenium or copper levels as a trigger for the pneumonia.

In these cases, the ultimate cause was lack of accumulation of these elements in the womb – levels have dropped to dangerous levels and the calf has died from an opportunistic disease.

It is also likely in this scenario that calf growth rates in animals which don’t die are affected.

How to avoid a shortage

Seek advice from nutritionists or vets and get your forage analysed to see what trace elements and minerals might be lacking on your farm.

If you rely on forage to keep winter rations cheap you need to know what this is, and is not, providing to the cow and foetus.

Interpreting a mineral analysis is difficult, as minerals interact with each other – for example molybdenum, which acts as an antagonist for copper. Seek professional help.

Supplementing the late gestating cow or the calf at grass can be a way to avoid calf losses.

While the problem often results in deaths seen in early summer (see graph), the cause of the problem is often in mid-winter when the calf is still unborn.