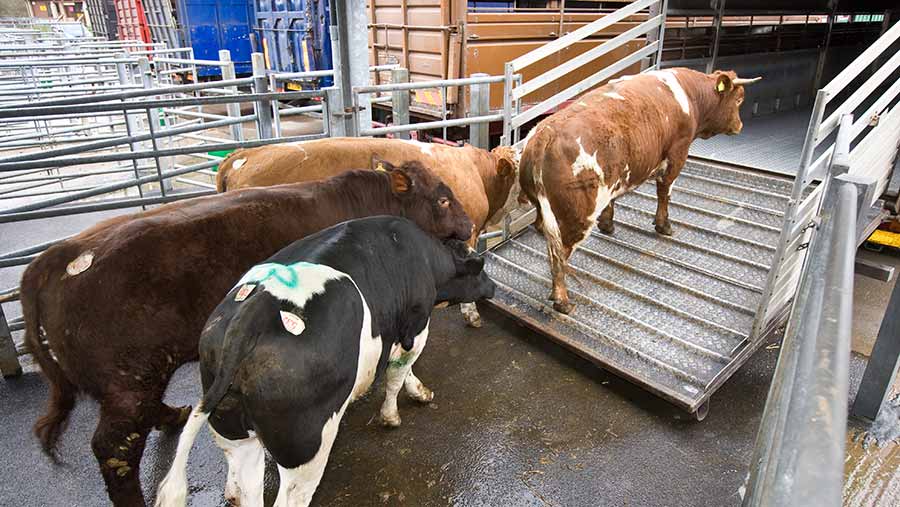 Carcass defects and poor eating quality of meat cost the livestock sector millions of pounds a year, yet simple steps could be taken on farm that would minimise losses.

Research shows defects such as dark, firm, dry (DFD) meat can reduce the value of a young bull carcass by 35p/kg, or £115 a head.

Abattoirs report about 10% of bulls and 4% of steers exhibit dark cutting meat, which is linked to stress in the animal, particularly during the 24-48 hours ahead of slaughter.

The research also shows when consumers buy a poor piece of meat they will not return to purchase the same cut again for an average of three months.

It means tackling the on-farm factors – such as stress and injury that lead to DFD meat and other quality defects such as bruising, toughness or infection – is crucial to achieve the best returns possible and keep a grip on market share for the long term.

Muscle activity is fuelled by sugars, or glycogen, and in healthy and relaxed animals, the amount of stored glycogen is higher.

At slaughter, glycogen is converted into lactic acid, lowering the pH to below 6. It is this lower pH that produces more tender meat that keeps longer and has a good colour.

In contrast, if animals are stressed, the increased tension and muscle activity uses up the glycogen store.

1. Finish animals efficiently and ensure they are growing at a sustained rate

Age and lifetime growth patterns influence the toughness and gristle of meat. The aim should be to provide a controlled, consistent plane of nutrition that minimises checks throughout the animal’s life.

Steers and heifers on the trial, finished at 18-24 months on a higher plane of nutrition, produced better eating quality with less gristle than cattle finished at 36 months off two summer grazings on low-quality pasture.

But while researchers attributed results to the longer period of ageing beyond maturity, they concluded that variations in planes of nutrition over the two summers were also to blame.

The sudden drop from high-energy feed indoors to low-quality grazing led to poor lean growth and increased the deposition of gristle.

Although experts acknowledge some influences were outside management control, they said the effects on growth rates could be minimised by ensuring the transition between peaks and troughs of nutrition was as smooth as possible, using supplementary feeding.

Growth rates are also a key indicator of when to sell an animal for optimal meat quality. Once the animal matures it lays down fat and meat becomes tougher, so weighing animals regularly will reveal a pattern in growth rates.

While cattle are growing at a sustained high rate, it is safe enough to assume they can be retained for a further month until the next weighing point. For steers and heifers, a rule of thumb is to maintain growth over 1kg.

However, once the growth rate declines, the animal will start to lay down fat and it is time for them to be sent for slaughter or meat quality will be compromised.

2. Inject stock in lower-value areas, not the rump, and ensure equipment is clean

Vaccinations can cause visible injury and devalue the carcass. Where infection is introduced, the problem becomes more serious, with deep-seated abscesses resulting in major losses in value.

See also: How to avoid needle injuries when injecting

Despite the potential risk, intramuscular injections are typically delivered into the largest muscle area – the rump. But this is the prime meat area and so any lesion will potentially damage the most valuable cut.

Instead, experts advise delivering vaccine through injections into the lower-value neck muscle.

Hygiene is paramount and new needles and syringes must be used in accordance with veterinary or manufacturer guidance.

The threat to welfare and carcass value is too great to risk using old equipment, even when it has been cleaned.

3. Handle animals with care and ensure facilities are fit for purpose

Handling can cause meat quality to fall through stress and injury. The situation on farm has improved with better-designed handling facilities and a reduced use of force to shift stubborn animals.

However, injuries caused by another animal in the lairage or slips, falls and collisions with metalwork remain a common reason for the carcass to be downgraded or even condemned.

When bruising occurs, blood escapes from blood vessels into the surrounding muscle tissue.

At inspection, any bruised meat will be condemned because it is unacceptable to the consumer, it cannot be processed and the escaped blood provides an ideal substrate for contaminating bacteria to thrive.

Even a slap to encourage the animal to move can cause sufficient damage to the muscle that the carcass value will be compromised. The slap will also cause the animal’s stress levels to rise.

Stress, caused by poor handling within 24-48 hours of slaughter, during loading or at the lairage, is recognised as a major cause of meat spoilage.

When moving stock, it is important to appreciate the animal’s perception rather than take a human’s perspective.

Cracks in the concrete floor or sudden, dazzling light through gaps in cladding can spook an animal, stopping it dead in passageways.

Likewise, a sharp bend in the handling system may be perceived as a dead end, again stopping the animal in its tracks and causing anxiety through the following group.

The stress will cause the animal’s metabolism to rise, using up the glycogen store in muscle and, at a stage so close to slaughter, result in dark cutting meat.

It is vital then to look at the handling system and ensure surfaces are not slippery, but level and unbroken with any sharp bends removed. Loading aprons and ramps must also be non-slip and shallow to keep cattle moving.

Lairage can lead to significant stress and hence poor meat quality. Bulls in particular are prone to becoming stressed.

The main advice is not to mix bulls in the two weeks ahead of transport because their aggressive behaviour will cause stress levels to rise.

When drawing finished bulls from different groups to make up a consignment, it is best to colour mark and remove the animal on the day of transport. Where possible, systems could be formed around larger groups, allowing drafting of finished groups to take place without any mixing.

5. Don’t limit feed ahead of slaughter

Previous advice has suggested restricting feed ahead of slaughter to limit gut fill, which improves hygiene in the abattoir.

But leaving an animal hungry can lead to stress. All industry experts now urge farmers to put welfare first and say limiting feeding should no longer be seen as routine practice for long periods ahead of slaughter.

Reducing stress during haulage is the final element of production where the livestock keeper can influence stress levels.

Batch sizes should match the available transport space so animals are not too sparsely positioned and vulnerable to falls and injury while the vehicle travels.

Where possible, journey times should be limited to the absolute minimum and routes taken that have fewer bends and stops, again to reduce the risk of injury.

This will reduce the stress caused and the animals should arrive at their destination with the best chance of yielding good-quality meat.