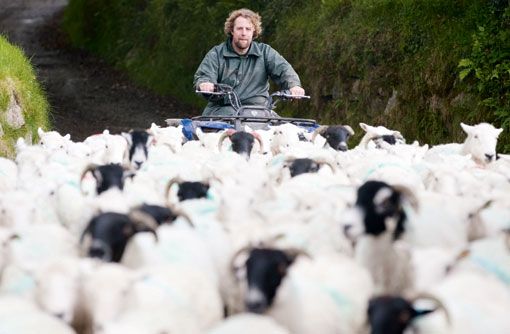 Our second sale of Mule ewe lambs at Tavistock saw another strong demand for good lambs and we averaged £95 for our second pick of lambs.

We were pleased considering they were April-born and from the middle of Dartmoor. It is just a shame that there aren’t more Mule breeders locally, as there is plenty of demand and I am sure with more lambs available more buyers would be tempted to buy locally instead of going north.

We also had some Blueface Leicester rams and some Scotch hogs at the same sale. The Bluefaces sold, but there didn’t seem to be enough buyers and we were a little disappointed with the trade.

We took home a group of our ram lambs, which my brother Neil had high hopes for, but since the sale he has discovered Mulebook – a website where Blues and Mules are talked about and traded. After posting some pictures of the lambs, he has now sold three of them and is delivering them to Scotland next week while buying a few replacement Swaledale ewe lambs. I must confess to taking the mick out of him for his social sheep networking, but after he made a few sales I decided to keep quiet.

The harvest frustration continues. We have three fields left to save and if we can’t snatch it off in the next week we will be turning the cows in. It has been a miserable harvest, and with concentrate prices rising and wet and cold weather set to stay, it could be a long winter on Dartmoor.

Mathew Cole, his brother Neil and parents Arnold and Bridget, farm 720ha on and around Dartmoor. They keep South Devon and Galloway suckler cows as well as Scotch and Swale ewes on the hills with mule lambs bred to sell. They also have pedigree flocks of Bluefaced Leicester and Whiteface Dartmoor ewes.