This year’s Farmers Weekly Inventions Competition yielded another fine crop of farm-fettled steelwork. Here we’re looking at the best of the creations for sheep and pig farmers.

John Greenwood built a simple crate for the rear of his quad bike to help him transport poorly sheep or feed to and from remote areas of the farm.

Mounting resembles an upside-down three-point linkage with two trailer latches on top and the bottom fixing sitting on the quad bike’s tow bar.

There’s a swinging back gate too, just like an ATV trailer. 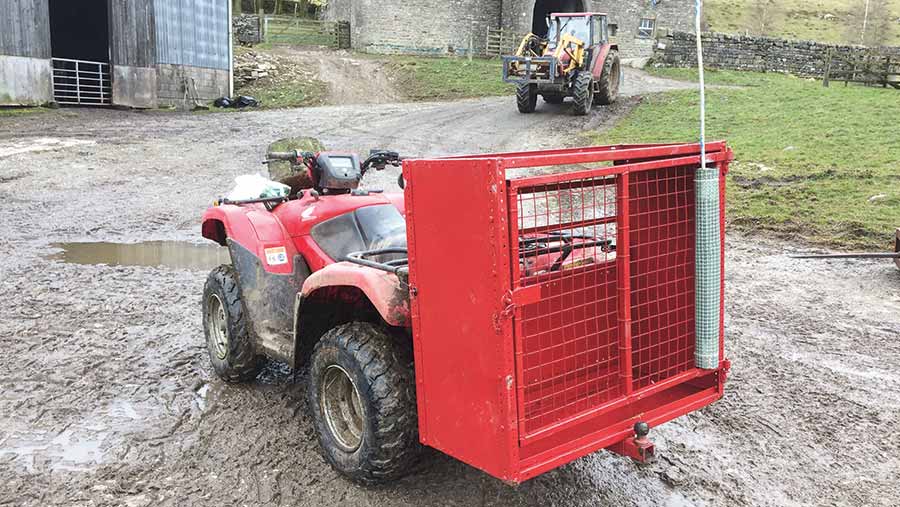 It’s made from old workshop shelving and is light enough to lift on and off in about 15secs. There’s enough space to carrying one sheep – Mr Greenwood says any more weight would make the Honda ATV too light on the front end.

All in all, it cost about £70 to knock together and took a year or so to design and build in his spare time

See also: 14 of our favourite farm inventions from over the years

To help shift a bulky IAE creep feeder, Ryan Pugh bolted a pair of wheels from an old cement mixer on the rear and added a trailer hitch and drawbar to the front so it can be towed. 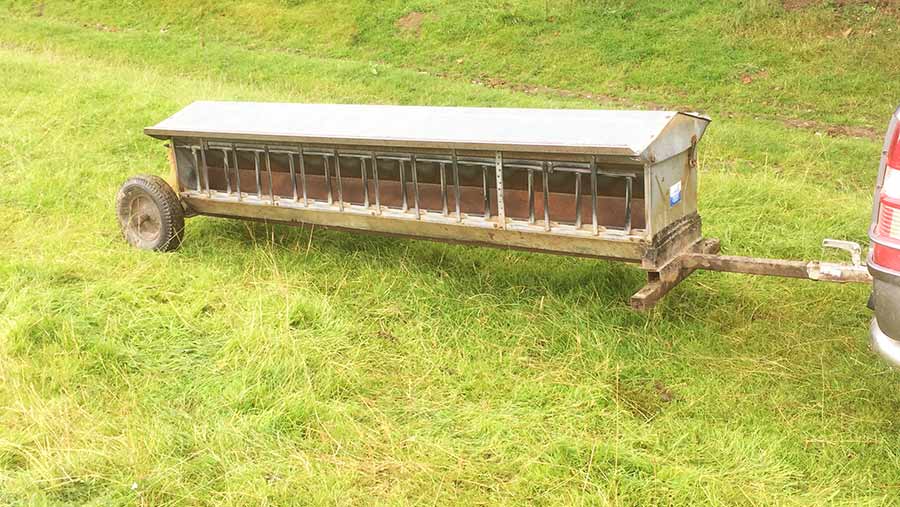 It took him under an hour to make and cost the grand total of £30. It saves heaps of time when shifting the trough to different fields as it can be towed with the ATV or pickup and there is no need to return to the yard to grab the JCB. 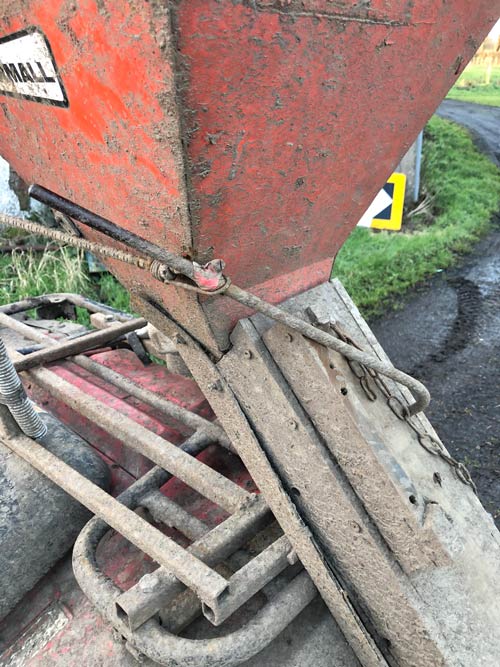 Sheep farmer Richard Coleman designed and fabricated his own quad-mounted snacker to reduce trampling around field troughs that causes them to fill with water and dirt regularly.

He found that traditional trailed setups were too cumbersome and hard to transport, particularly given that his ATV also needs to be carted to different farms on a trailer towed by the farm’s 4×4.

Instead, he sourced a hopper from a redundant Cormall grinder and attached a simple chute with an integrated paddle to shut off the flow of the material via an external lever.

Keeping things mechanical saved having to wire any electrics through to the hopper.

A brace of simple-category inventions has made life easier during lambing season for Trevor Davey of Teignmouth, Devon.

With most ready-made lamb adoption hurdles only available as complete pen assemblies that take up too much space in already-cramped lambing sheds, he designed his own that slots in place of a conventional 4ft hurdle on the front of a pen.

It is constructed from a 30mm box-steel frame clad on either side by 2mm-thick zinc plate. 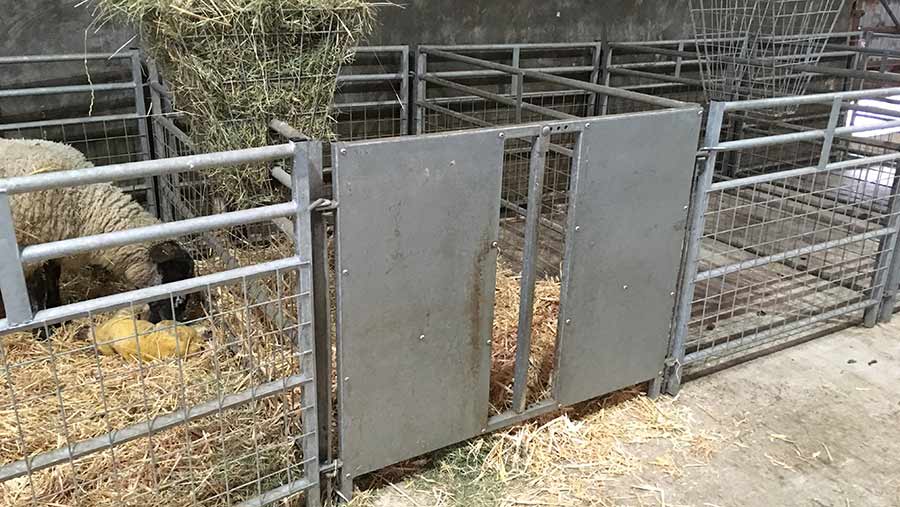 The position of the yoke is adjustable by a series of holes to suit the size of the ewe and is secured by an 8mm bolt with butterfly nut to make it quick to undo and adjust.

To connect the adoption hurdle into an existing system there are four lugs welded to the side of the framework with holes to suit the farm’s existing Bateman hurdles.

The kit has also been galvanised after fabrication to avoid any corrosion issues.

It can be removed as soon as the ewe accepts the lamb, which is usually after a couple of days.

The second item is a system for mounting a heat lamp to lambing pens to warm weak newborns. 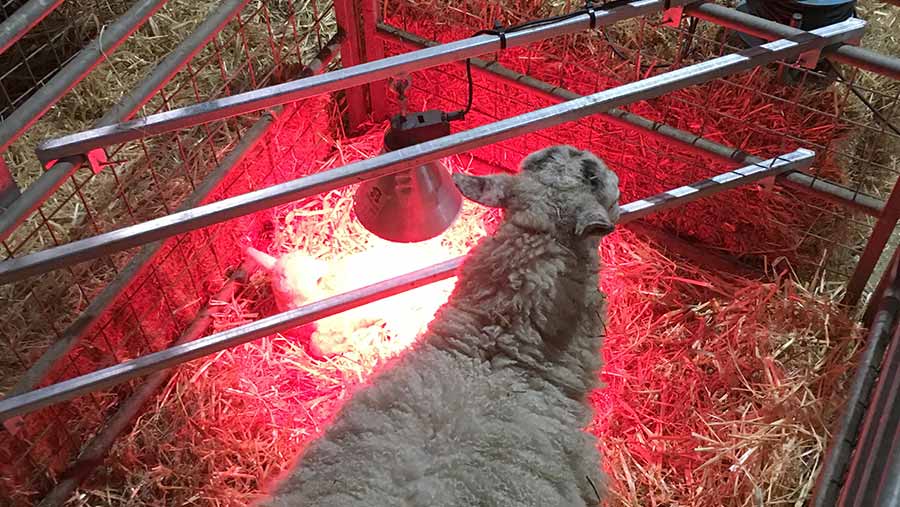 The lamp holder is made from 25mm box-section, with further framework across the corner of the pen to stop the ewe from accessing the heated area.

This is fixed to the existing pen assembly by lugs welded at 45deg to the box steel, with 6mm-long bolts to secure them to the hurdles. A galvanising dip finished the job.

Kenny Fraser built his own sheep-handling trailer, having become sick of the high prices, limited functionality and slow set-up times of models sold on the open market. 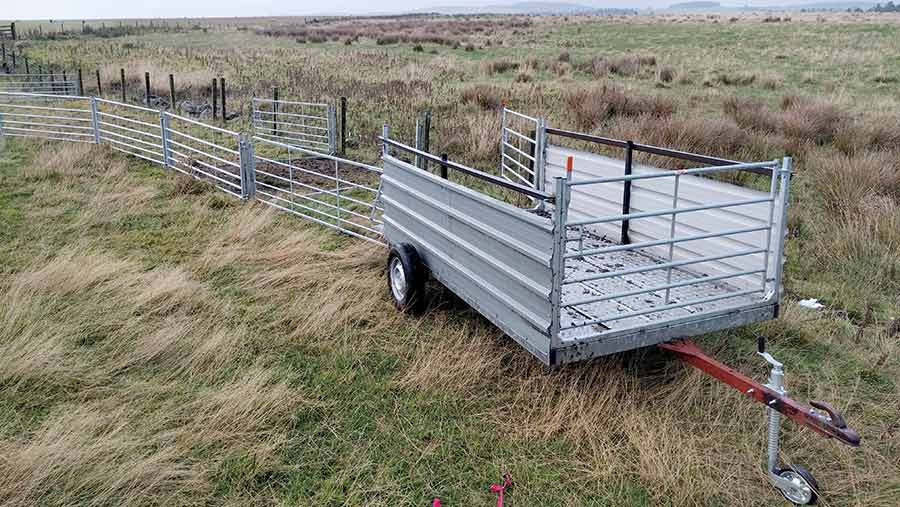 The base was formed from a newly-built 10x6ft heavy-duty trailer ladder frame found on Gumtree for £100. The only other brand-new parts required were a pair of 6ft Ritchie gates and a brace of bolt-on axles that came with wheels and fittings.

Decks and ramps were recycled from an old sheep trailer, while lengths of angle-iron formed the side rails.

The side struts were once disused washing line poles, the aluminium sheets were off-cuts from a shed roof and the draw bar was nabbed from an old trailer destined for the scrappy.

Total build time was about two days and the overall cost was a shade under £700. Added to that, he spent £650 on gates from Glendale Engineering – enough to hold 120 ewes.

He says the whole lot can be set up or packed away in just five minutes and he uses the trailer to transport up to 16 ewes between fields, for shifting round bales when the tractor loader is busy and for moving the ATV and handling gates around the farm.

Fed up of balancing sheep troughs on the back of the quad bike or hanging them out of an ATV trailer, Alastair and Stephen Maxwell built their own trailed carrier.

The straightforward design uses a central beam attached to an axle with two U-shaped supports to hold the troughs in place.

To make it easy to tow, they built the carrier out of lightweight steel box section and fitted a pair of low-ground-pressure ATV tyres. 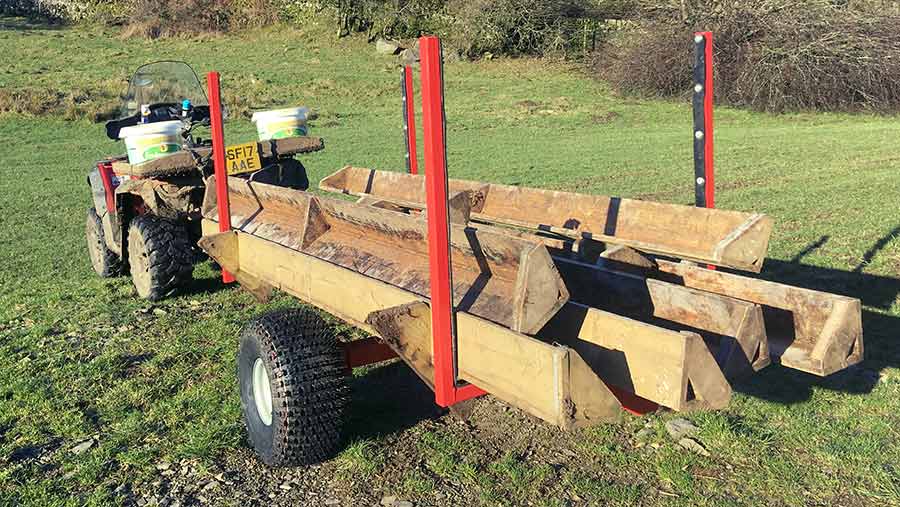 Rubber strips were also Tek-screwed onto the inside edges to stop the troughs sliding out. If stacked carefully, it will accommodate about 16 troughs.

According to the pair, it only took about three hours to put together in the workshop at their farm near Dumfries.

Having had enough of hauling his old sheep scanning crate in and out of the back of his pickup, Michael Woodburn decided to make his own self-contained trailed unit. 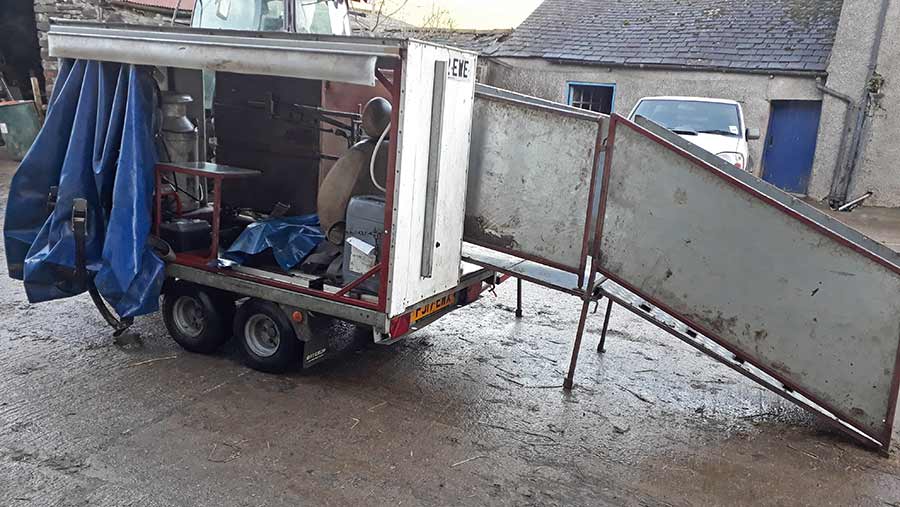 Before embarking on the project, he looked at some off-the-shelf products, but didn’t like the fact that they were fully enclosed – meaning fumes from aerosol cans used for marking would be trapped inside.

Instead, he came up with a design that put the scanning crate on an open-topped platform, with the operator tucked away in the relative comfort of a partial cabin.

According to Mr Woodburn, the trailer provides a stable working platform and puts the sheep in the ideal position for scanning. There’s also a race that is transported on the trailer and set up in a few minutes, as well as a platform for the person marking up.

For occasions when he needs to scan in indoor pens where the trailer won’t fit, the crate has been fitted on a sliding mechanism that lowers it to a suitable position for two people to lift it off safely.

Power for the scanner comes from a 12V car battery that easily lasts for a full day’s scanning. There’s also a 2.6hp petrol-driven pressure washer on board so the unit can be thoroughly cleaned before moving between farms.

Its water supply is an old 10gal milk churn, which is enough to wash down two to three times.

After its first season in operation, Mr Woodburn says sheep flow has improved and the whole job has become much more pleasant.

To help keep ewes and their lambs separated from the rest of the flock at lambing time, serial inventor Meredith George took four 1,680x820mm sheets of ply board and cut interlocking groves on each end so they fit together without the need for pins or fasteners of any kind. 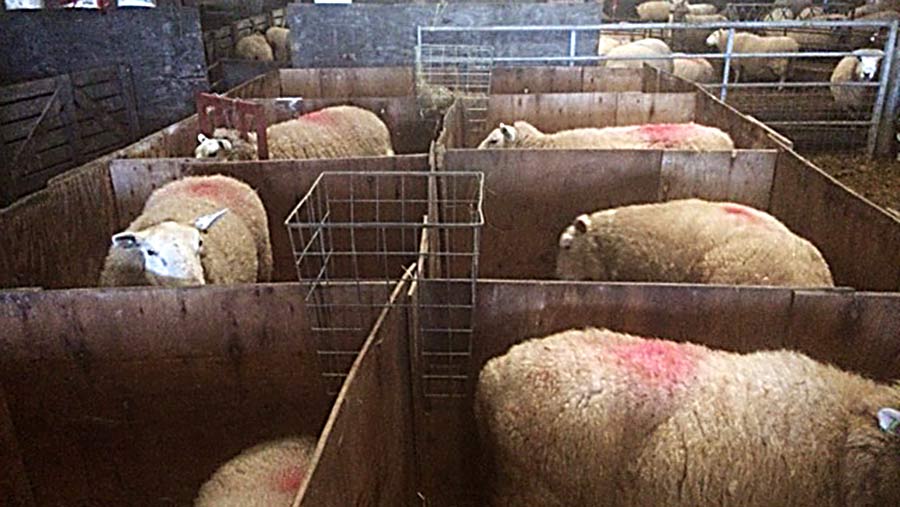 Four boards in a square make a pen of 1.4×1.4m and, cleverly, eight boards can be joined together to make a pen double the size. Mr George says other livestock such as piglets and small calves can also use the temporary holding pens.

Pig farmer Neil Baker has come up with an ingenious method of raising and lowering water troughs using a cordless impact wrench. 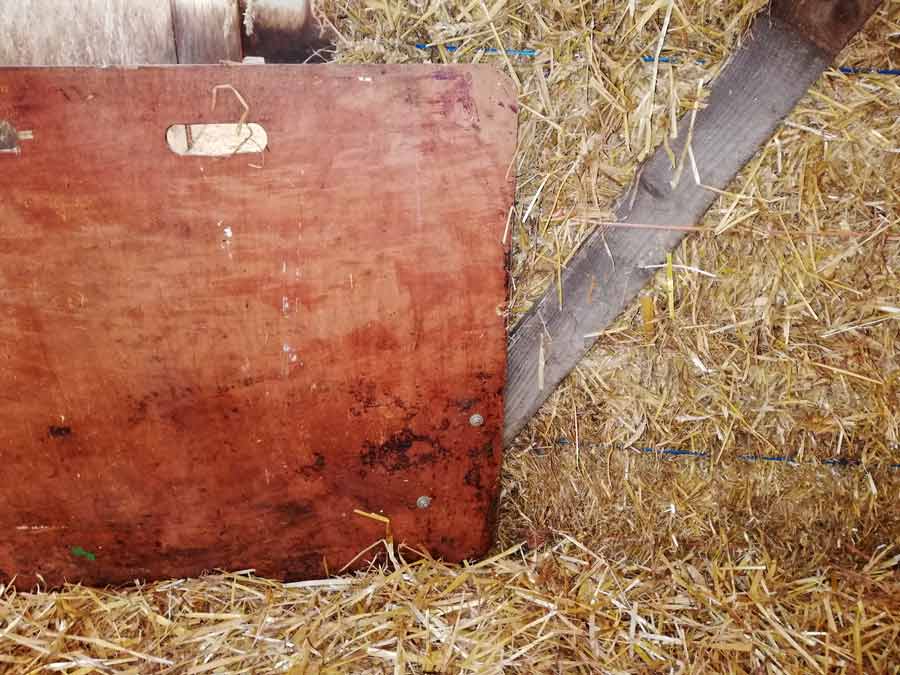 His sliding brackets are made up of two pieces of box section – one slid inside the other – and to the side he’s connected them with a piece of threaded bar.

Using the wrench to spin the bolts then causes the troughs to move up and down with no physical effort.

Mr Barker also has a quick fix for attaching wooden boards to bales – he just slides a small batten behind the strings and use screws to attach the board to it.