This year’s Farmers Weekly Inventions Competition yielded another fine crop of farm-fettled steelwork. Here we take a look at the best of the fencing and wood processing kit.

Third place in the simple category went to an invention that speeds up the job of setting out and taking down electric fences.

It was made by one of Jim Moody’s part-time employees and centres around a clever attachment for the front of the Kubota UTV that works with the Rappa fencing system mounted on the rear. 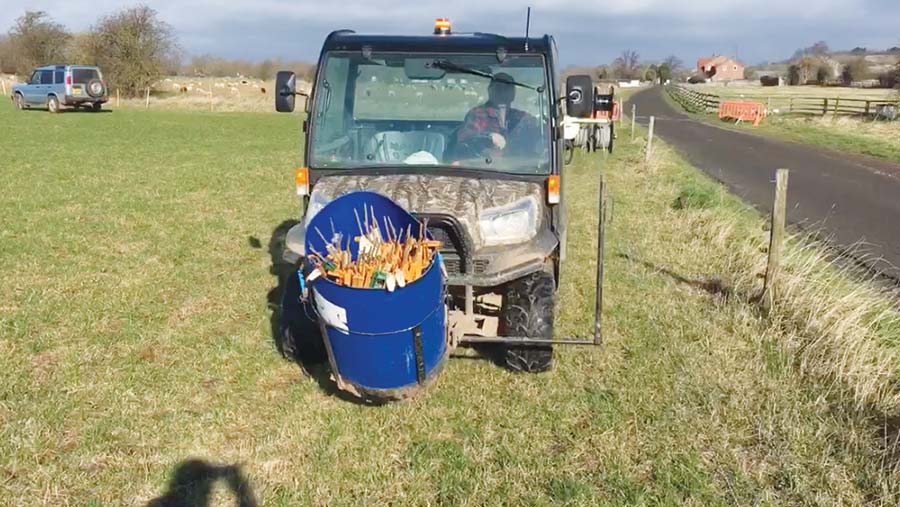 Fencing stakes are tossed into the barrel on the front attachment, which can be angled to 45deg when loading and unloading the posts and then returned upright for road transport.

The vibration of the machine when moving means the posts rattle themselves level, so the barrel can be filled to the brim, with no rejigging needed mid-flow.

A walking-stick-type guide swings out past the front wheel of the UTV and acts as a funnel for the wire onto the modified Rappa kit.

This also means that as the wire passes down the side of the machine, it doesn’t get snagged on the wheels or body work and is helpful when turning corners.

The whole attachment slides into the hole vacated by the front tow ball and is simple to take on and off. Total cost was just £50. 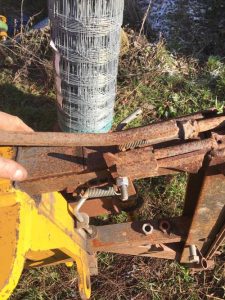 A one-man fencing kit has sped up the job for Warwickshire farmer Pete Mann.

His home-crafted wire tightener will take standard stock fencing and has a simple over-centre latch system combined with a length of clamping angle iron to swap from unravelling mode to pull it taut.

The unit is carried on a Matbro telehandler and its boom can be used to do the pulling – apparently it can comfortably tighten over 100m of high-tensile and mild wire without leaving any kinks.

Though the finished product could do with a lick of paint, Mr Mann says it was originally meant to be a prototype but worked so well that he ended up keeping it.

Johnny Houlton from West Sussex made a ripper tooth for his New Holland B110 backhoe loader to make life easier when removing tree stumps.

Using a worn-out ditching bucket, he sliced off the useful bit – the attachment’s ears and pins – with the oxy-acetylene gas.

Then he dismantled his retired single-leg Bomford subsoiler (he plans to use the frame to make a large linkage tool box for the farm’s Fastrac).

The legs and pins were then welded together, and he also kept some small wings from the old bucket to make sure the ripper sits tidily on the ground when not in use.

Mr Houlton says that the new kit cuts through the roots slickly and puts very little strain on the loader.

It took about an hour to build and the only costs were for cutting gas, welding wire and a lick of black paint. Equivalent off-the-shelf versions can cost close to £1,000.

Pembrokeshire contractor Rhodri Thomas decided to take some of the hassle out of fencing jobs by building a combined wire unroller and tensioner.

The tool is mounted off the three-point linkage of his JCB Fastrac and can carry up to 500m of net and 800m of barbed wire. Thanks to a hydraulic ram, the wire holder can also pivot forward to pick up a new roll. 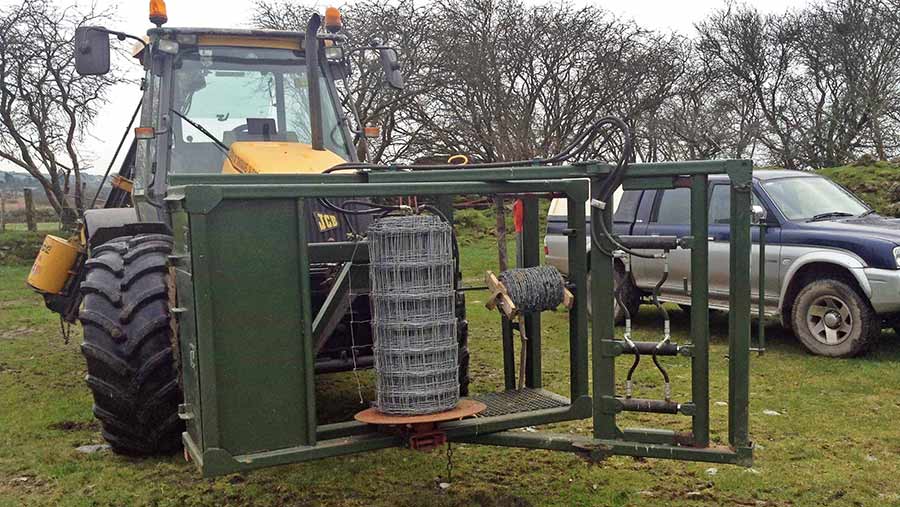 As for the tensioner mechanism, this can be swung to the right or left of the machine and uses three hydraulic rams to activate a bar that grips the wire.

The tractor can then move backwards or forwards to tension it. A hydraulic top link also allows him to tilt the tool to compensate for uneven ground.

The addition of a couple of tool lockers on the side and slots for a bar spade and mallet means it’s capable of carrying everything he needs for a fencing job.

Mr Thomas also mounted it on an A-frame so it can be hooked up and dropped off quickly.

Oxfordshire farmer Jim Calcutt came up with his own tractor-mounted wood processor to take the hard work out of sawing firewood.

His so-called Logger Head Wood Processor fits on the three-point linkage of the tractor and can cut and split timber up to 3m long and 400mm in diameter. 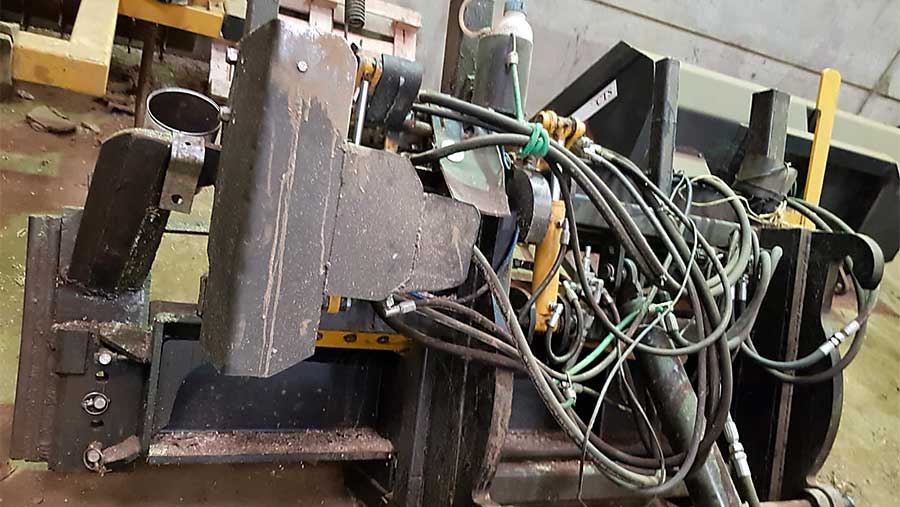 Thanks to a ramp on the front it can scoop up the timber, before a hydraulic arm drops down to hold it in place.

A hydraulic chainsaw – complete with automatic oiler – then cuts it into the desired lengths, which drop automatically into the splitter below.

Many of the parts were sourced from a firm that produces wood processing machines and Cherry Products carried out the welding work. Mr Calcutt did all the assembly and fine-tuning. 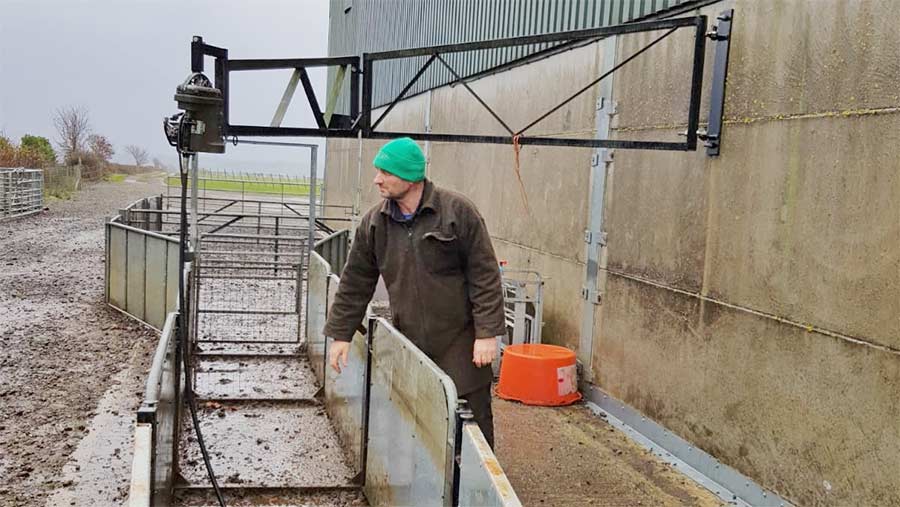 To get each component running at the correct speed he makes use of the flow and time adjustments on the tractor spool valves. It cost between £2,000 and 3,000 to put together.

Mr Calcutt has also come up with a couple of other inventions including a swinging drenching arm that can reach over his whole sheep race.

This means he can hang his dosing or injecting equipment out of the way, rather than having to carry it with him. 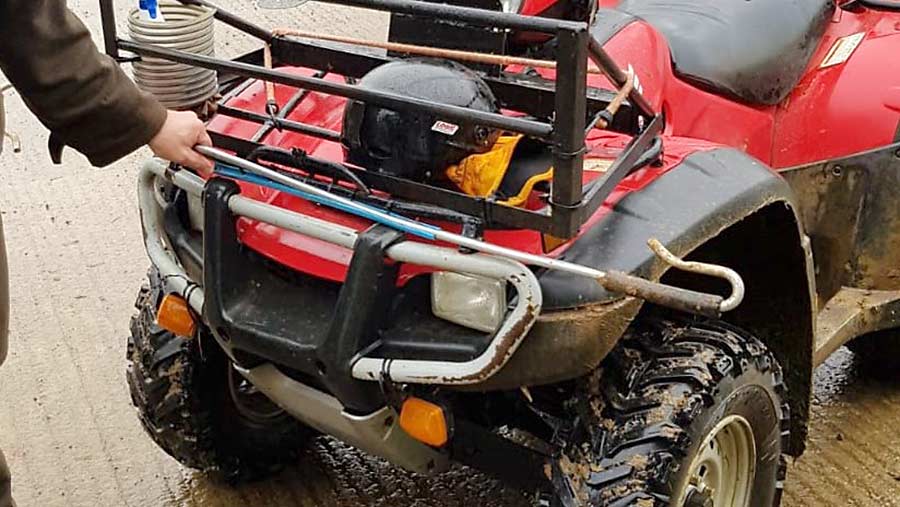 It’s also strong enough to take the weight of a shearing machine so that he can quickly dag a whole race of sheep.

Finally, he made a simple quick-release crook holder out of a length of blue water pipe cut in half and mounted on the front rack of his ATV.

When pushed into this the crook is held securely, but it will release quickly if it needs to be grabbed in a hurry. 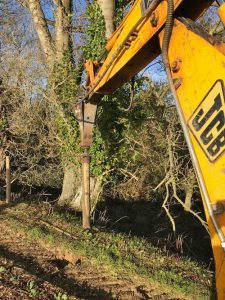 In a bid to keep rabbits and deer off his arable land, Steve Limm knocked up a neat attachment for driving 6in fence posts with a JCB 3CX.

He started by cutting a spare concrete breaker chisel point in half, which was welded to a 250x250x200mm steel plate.

Four 18mm holes in the corners of the plate mean it can be attached to a second, equal-sized plate with the same four holes.

The second one carries a bit of steel tube to slot over a 6in stakes, but the perk of the design is that it can be easily changed to drive in different sized or shaped posts.

Mr Limm says it works brilliantly and, when the digger can push them in no further, he turns on the hydraulic breaker that will batter them in as deep as you like.

An afternoon spent in the workshop has saved hours in the field, he says. 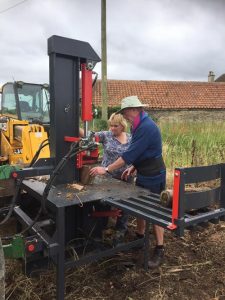 An increasingly debilitating back problem prompted Nigel Wilcox to build his own log splitter with a waist-high platform and hydraulic timber lifter.

The starting point for the project was an old welding bench he had made in his youth, to which he added new metal to form the main beam and side log lift.

He also bought a new 16t ram for the splitting wedge and a 3.5t ram for the lifter, along with a pair of hydraulic valves and pipework.

To allow the unit to be hooked on the back of a tractor, Mr Wilcox added a set of three-point linkage brackets.

In operation, the lifter can be used to raise one large ring up to the table height or a number of smaller rings.

These can them be slid across to the splitting wedge without having to bend down.

Split logs are then placed into an IBC frame, which can be moved with pallet forks, keeping the amount of manual handling to a minimum.