When Robert Hooper bought a Bailey flat-bed bale trailer, it got him and friend Dale Hutchinson thinking about how they could adapt it to speed up the job of strapping down round bales before moving them from field to yard.

Their idea was to mount a cage on top of the trailer to clamp the bales in place, thus eliminating the need for straps.

To do this, they had to lengthen the trailer by 900mm to get the required length and axle position, or else the added weight of the cage would be too heavy on the tractor’s hitch. 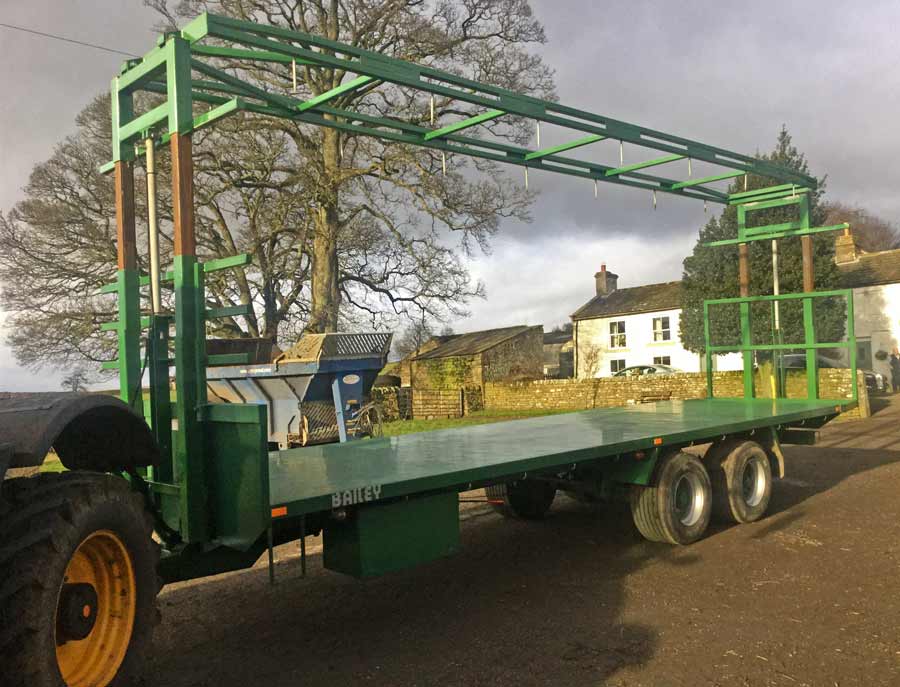 At the rear, the trailer’s sides have been tapered in by 6in as the extra length had the potential to catch the back end on gate posts – a modification Mr Hooper says has proven invaluable.

Key to the design was the hydraulic ends that use two rams with a long 1.2m stroke to accommodate two- and three-bale-high stacks.

Designing the top was tricky as it had to be light enough to stretch the 30ft trailer, but strong enough to avoid sagging in the middle.

They chose to use 60x40mm box in the ladder framework, with downward-facing 250mm spikes dotted along the cage to spear each bale and pin it in place.

Round or square bales can be transported with the trailer and the addition uses only one spool valve. For extra safety, there are locking taps for the clamp on the hydraulic pipes to hold things tight along the road.

The project took five days to complete and cost about £3,500. It was tested for the first time last harvest and the team reckoned it saved about 30 minutes a load.

After getting fed up of roading a loader from farm to farm to shift bales, Tom Jones took matters into his own hands and built a bale handler from scratch that could be towed by an ATV or pickup. 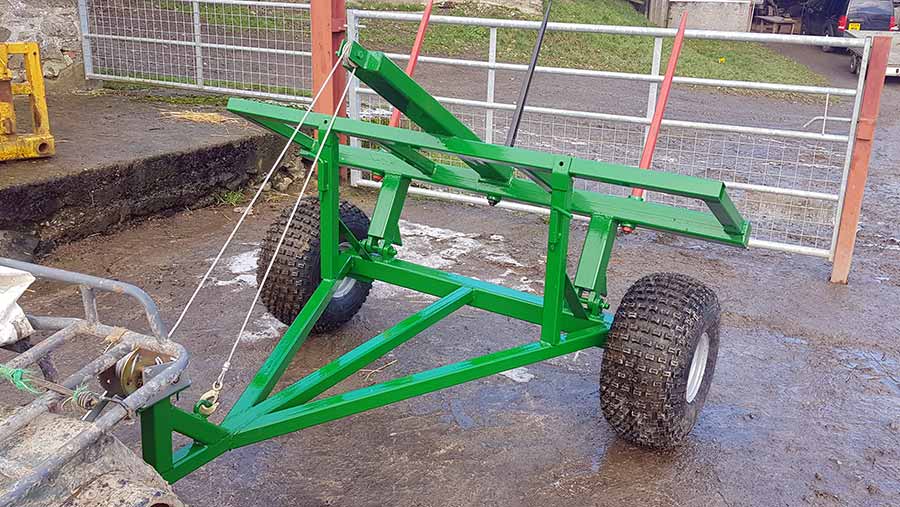 The simple device can winch bales into the transport position and lock them in place via pins.

This means there is no need to fetch the telehandler, as feeding can be done with any vehicle. Built from steel leftover on the farm, it cost about £350 and took a couple of days in the workshop. 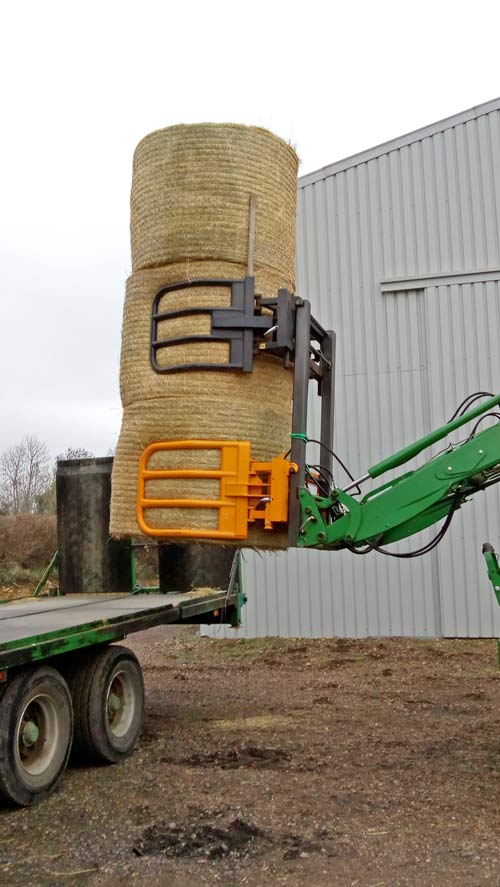 Robert Brown realised that buying a brand-new double bale grab was out of his budget, so he spent a couple of days in the workshop and built a three-bale version for the front of his John Deere 6230.

He already had a single Weaving grab on the farm that now sits on top of a new similarly styled unit below.

This was key to getting the two to work together – both run from the same hydraulic service, but are independent, so can clamp odd-sized bales at the same time.

He used 100x100mm box section to form the frame, with 40mm solid round lengths sitting laterally.

A 75mm end sticks out either side for the grabs to hook on to, with locking plates at the bottom for the Euro8 attachments.

Scaffolding tubes are then attached above the second grab to accommodate a third bale and stop it falling back onto the tractor.

Mr Brown did toy with the idea of a third grab, but weight alone would have made it unfeasible.

The whole build cost about £800, a majority of which was the purchase of an additional grab.

He reckons his bale-loading process is now three times quicker than before and the grabs can still be taken off and used independently as there has been no modification to the units.

Devon contractor Marcus Tucker was enlisted by a neighbouring farmer to come up with an all-singing bale spike that could safely transport multiple bales across a yard without them falling off.

The idea consists of three hydraulic folding spikes with a diverter tap to switch between folding and the sliding hydraulic back plate. This raises and lowers so the grab can carry four square bales.

The extension is added manually and has two lugs at the top to apply down pressure once the bales are loaded, preventing movement on rough fields.

The bulk of the metal came from 150x50mm steels with a few bits of 50x50mm and some laser-cut profiles. 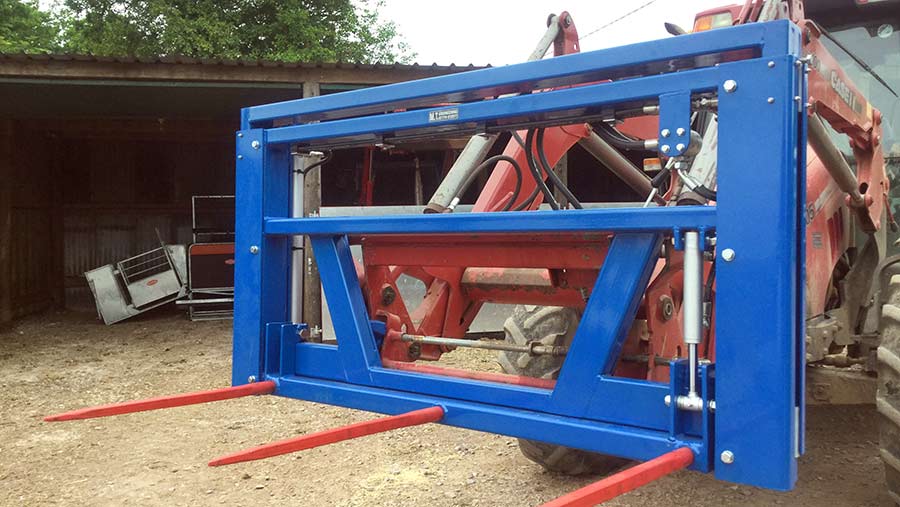 The final price totalled £2,000 including labour, materials and powder coating, and it took about a week to knock together. The most complicated part was getting the hydraulics to work smoothly.

Stuart White has developed a novel solution for getting heavy bales out the back of his Mitsubishi L200 pickup when delivering to customers, using a winch that slides the bales at the touch of a button.

A frame sits behind the cab and is linked to the winch by a metal cable. The winch is fixed to the vehicle below the rear tailgate and is operated by a remote control in the cab – all it requires to power it is the ignition switched on. 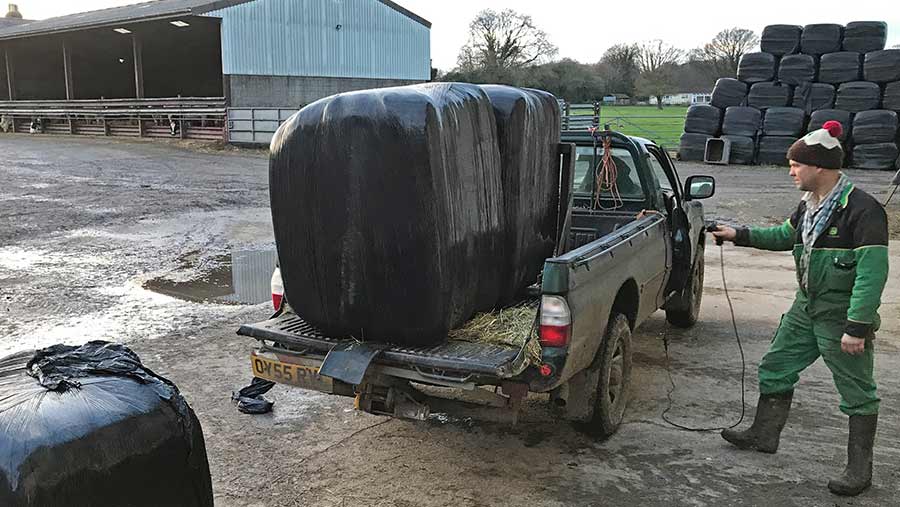 It can move three bales at the same time and once it has moved them off the truck, it is easily pulled back into position. It cost just £200 in materials and Mr White says he now couldn’t be without it. 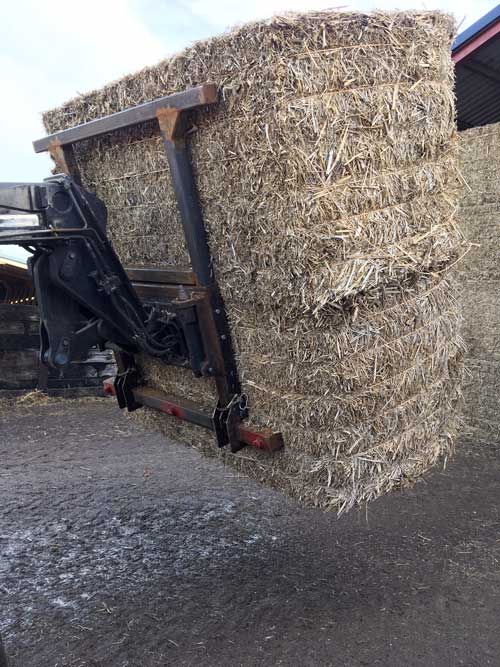 Staffordshire lad Byron Pym has a small business building agricultural equipment and came up with this neat folding bale spike for a customer.

The design allows the spikes to be folded vertically for safer travel on the road and it takes the removal of just one pin to drop them into work mode.

This pin is then reinserted through the frame to lock the tines in place.

Mr Pym also made the main frame adjustable so it can accommodate different bale sizes.

He came up with the design for his “Wrap Master” last year after being approached by a customer who wanted to easily remove rolls of wrap from the centre of the carrier.

His solution incorporated a hydraulically folding frame mounted on the front linkage that was capable of pushing the weight of 14 rolls of wrap.

For loading and unloading, the tubes sit in the horizontal position, making it easy to slide them on and off – they then pivot back hydraulically to the upright position for transport. 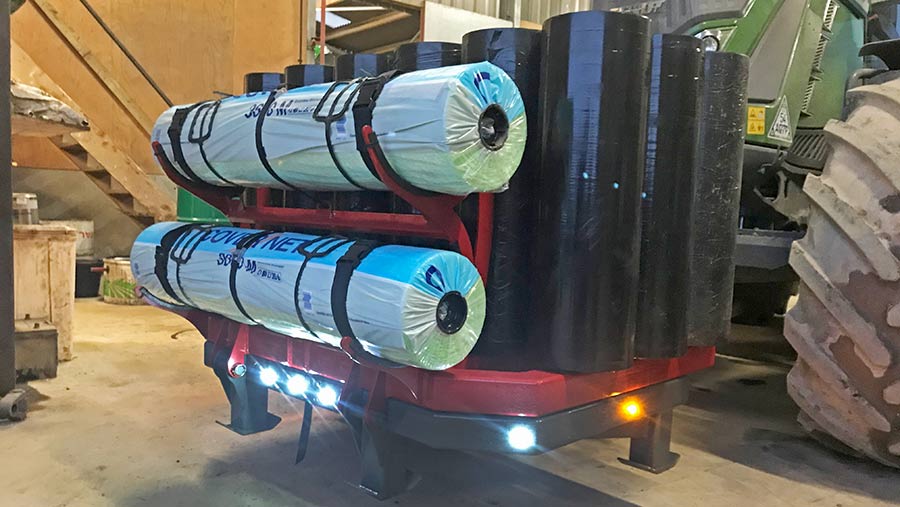 One customer that was running a McHale Fusion baler with additional additive tank in place of the net holder also asked that he accommodate two rolls of net into the design.

The frame is made out of high-grade 80x80x5mm-thick box section and 10mm plate, and he uses a 70x30mm double-acting ram to tilt the holder over.

To make sure the rolls of wrap don’t move around, he also gets hold of 70mm tube, which isn’t a standard size in the UK.

Off the back of his first prototypes he has been asked to build a number of units for the coming season, which will range in size from eight- to 22-roll capacity.