Sometimes the simple things are the best, like Jim Clay’s ingenious one-man gate lifter that takes the top prize in our simple category.

The Herefordshire farmer’s nifty tool allows a person to effortlessly lift and hang a gate single handedly, which as anyone who’s tried it will attest, is a particularly tricky task. 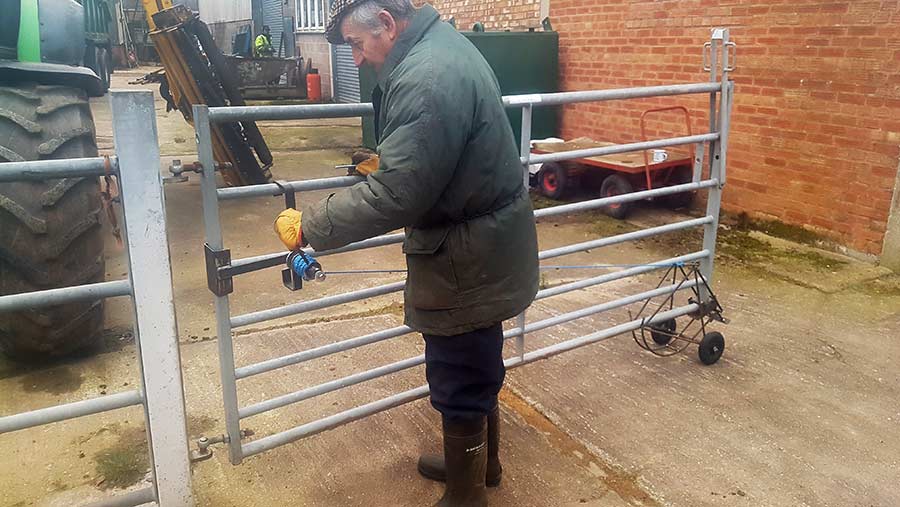 The main component is a curved metal trolley that clips onto the bottom of the gate. With this attached, the gate can be trundled to the place where it needs to be hung.

Once there, a wider handle is hooked on the hinge end of the gate and a rope is connected between this and the top of the trolley frame.

By turning the handle the trolley will then rock forward on its curved frame, causing the gate to lift in a controlled manner.

The user can then line the hinges up before turning the handle in reverse to lower it into place.

Mr Clay has been perfecting the design for a number of years with the assistance of local engineer Tom Oseman. He estimates it costs about £65 to produce. 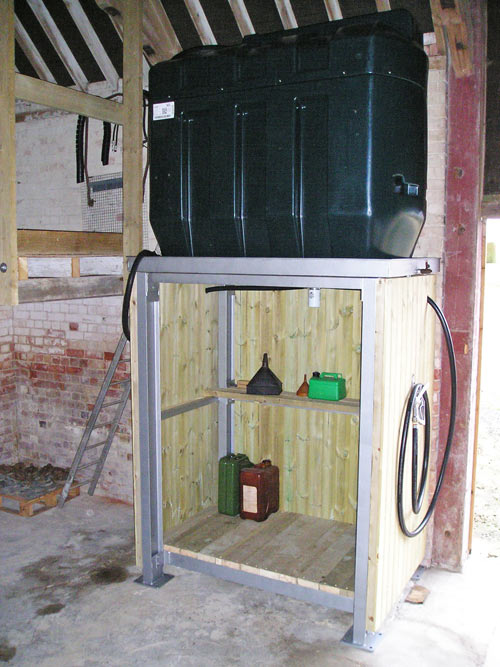 Having tolerated transferring diesel from IBCs to fuel cans to fill tractors up for long enough, Matthew Kidner set about building a bunded fuel store complete with useful space underneath for storage.

After some initial designs, he started with four steel joists that were salvaged from a dismantled barn a few years ago.

These acted as the corner posts of the layout, to which he added a top frame to support the diesel tank and horizontal braces to bring the corners together.

Space was left for a forklift’s tines to get underneath and move the structure if needed.

With the bones of the frame in place, Mr Kidner made a tray for the 1,100-litre diesel tank to sit on from an old fuel storage tank.

The whole frame received a couple of coats of silver paint before being battened and covered on three sides with tongue-and-groove boarding.

He installed some thicker treated timbers for the floor.

A diesel hose was routed through the boarding and a fuel filter added to the ceiling of the shelter to prevent it being knocked, with the hose neatly hung on one end.

The whole build cost £240 as most of the materials were on the farm already and it took about 12 days to complete.

Hiring in a vibrating screed to lay concrete can get expensive, especially if you have a yard or farm track on the to do list.

Mark Hicks spent the grand total of £0 and made his own leveller out of two 6m lengths of Z-shaped steel purlin that he had lying around the yard.

These are connected with threaded bar and 450mm spacers.

The vibrating comes from a mid-mounted motor with an old grass cutting blade attached via a bolt welded to the motor’s drive wheel. 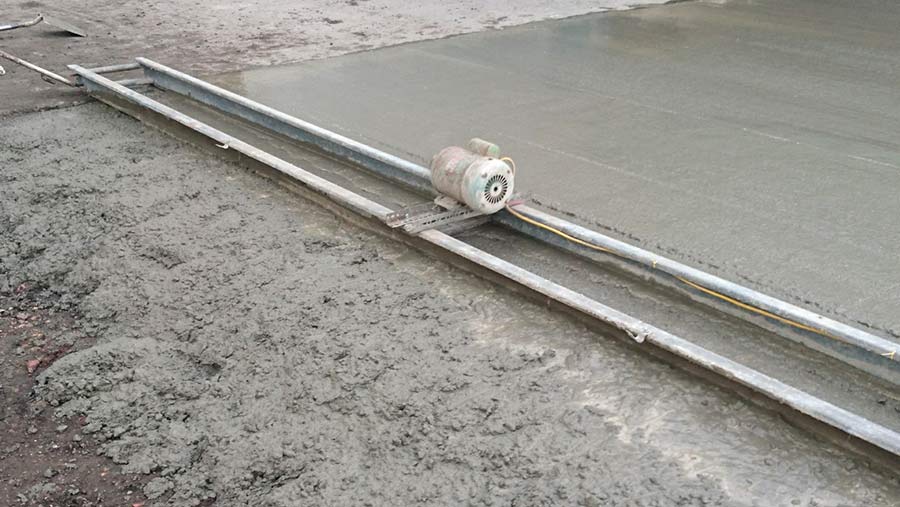 There’s a pulling handle at each end and to date Mr Hicks has relaid more than half the yard, a floor in a shed and sections of the farm track using a 0.75cu m pan mixer.

Max Harker was asked by a local equine yard to invent a contraption to make soaking and lifting sodden hay nets less of a back-breaking ordeal.

Central to the design is an old water trough, to which he added a steel frame.

A galvanised pole was hung through the middle of the frame, set on suspended bearings attached to an old hoist motor to mechanise the lifting process. 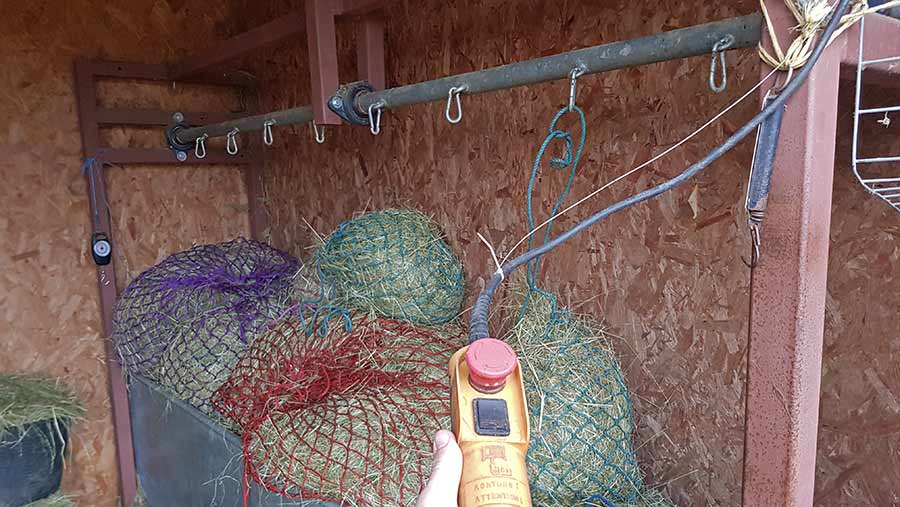 To work it, simply attach the hay nets onto the clips along the pole and then hit the lower button on the motor control to drop them into the water.

Once ready, the nets can be lifted out and hung over the trough to drip dry.

It took about a day to knock together and has helped the equine stables reduce manual labour.

Lengths of discarded elevator belt from a quarry have saved tankers and trailers run by North Yorks contractor M Metcalfe and Sons from getting caked in debris thrown from the rear tyres of the tractor. 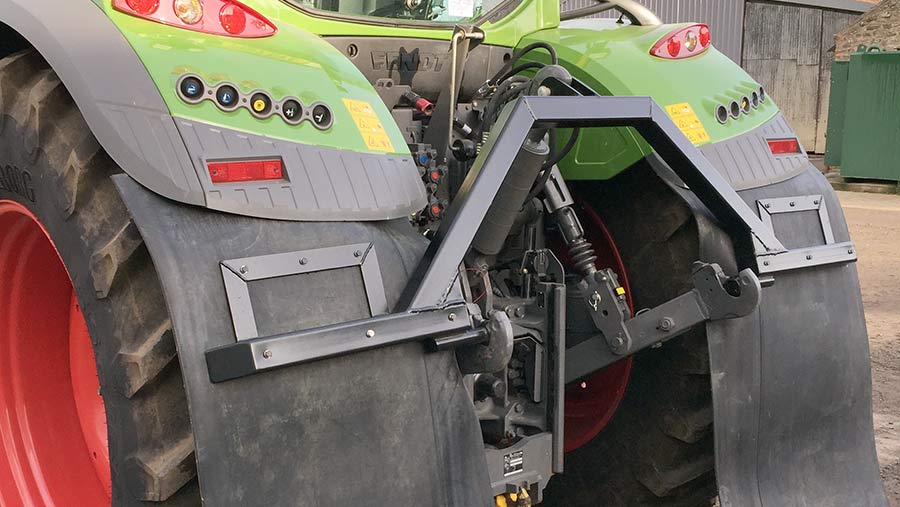 The heavy-duty belt is bolted to a frame made mainly of 70mm box-section steel and dangles close to the ground to catch any material. The frame is carried on the tractor’s three-point linkage.

Charles Metcalfe first made the long guards 10 years ago and has since built another seven sets for himself and other local contractors.

Wrestling with snaking lengths of ratchet strapping is a pain for anyone making regular hay or straw deliveries, but Edd Faithfull has come up with a neat way of winding them up. 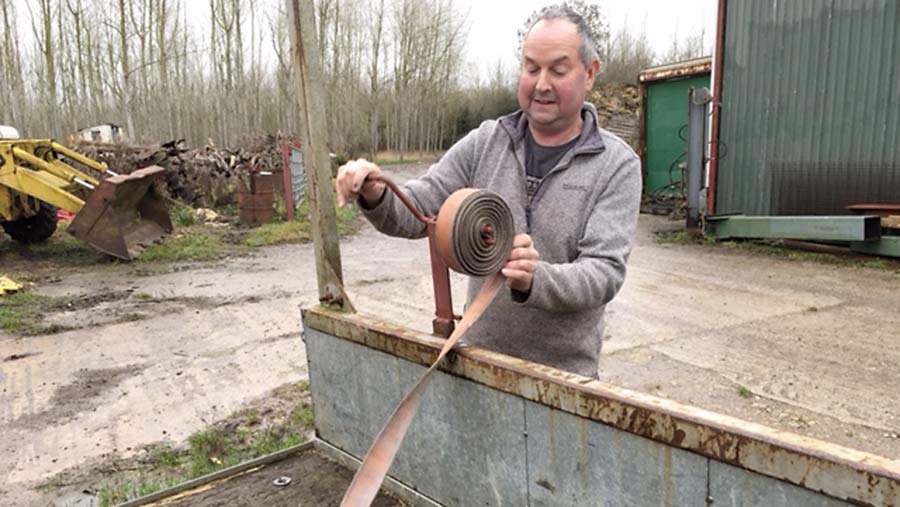 The simple design uses a length of plate to form the spine of the winder, along with a bent rod for the handle and a fork-like assembly to grasp the straps.

The winder is slipped onto a pre-mounted bracket on a trailer – from then, the straw is fed in and the handle is wound manually to roll it up.

Once wound, the strap slips off of the winder for tidy storage. 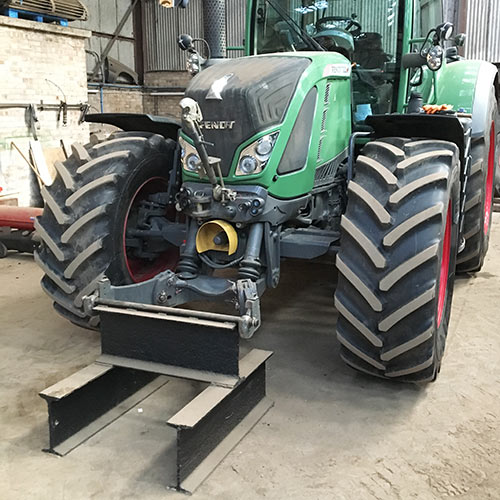 Thanks to his Fendt’s double-acting front and rear linkages, the tractor was already capable of lifting itself off the ground. However, placing loose blocks under the arms created a fairly unstable platform.

His solution was to fabricate some more secure blocks out of three lengths of RSJ welded in an H-pattern with a bar on top that the link-arm balls can fix to.

Now the tractor’s wheels can be lifted off the ground quickly and safely, without the need to hunt around for suitable props.

Paul Lowrie’s cheer-me-up coffee mug is a shrine to farming botch jobs. We’ll leave it to him to explain his fine work, which is bound to resonate with farmers across the country: 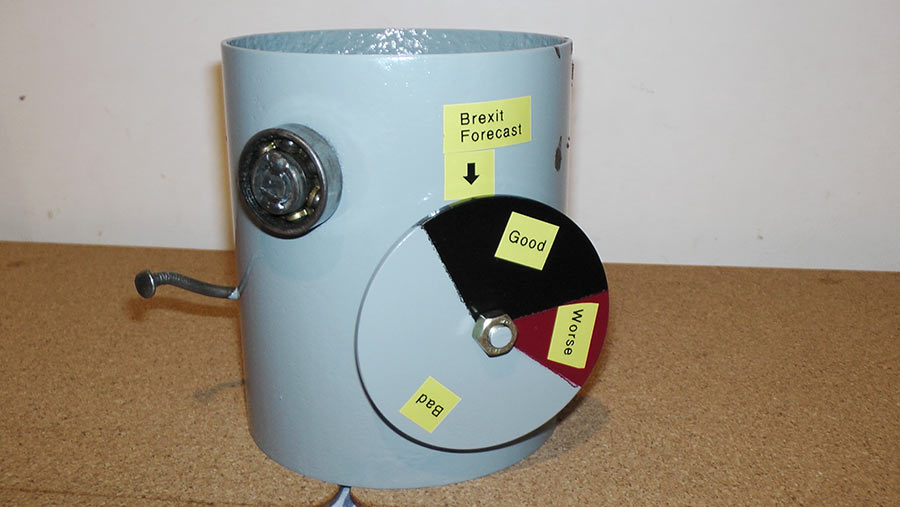