This year’s Farmers Weekly Inventions Competition yielded another fine crop of farm-fettled steelwork. Here we round up the gems built by dairy and beef farmers.

This year’s wackiest invention is John Stephens’ Cornish loader with a twist.

It is based on a 5t Thwaites dumper, from which he removed the skip and mounted the loader from a David Brown 995.

Fitting it to the swivel means the loader can turn in either direction and get into the most awkward of cow shed corners. 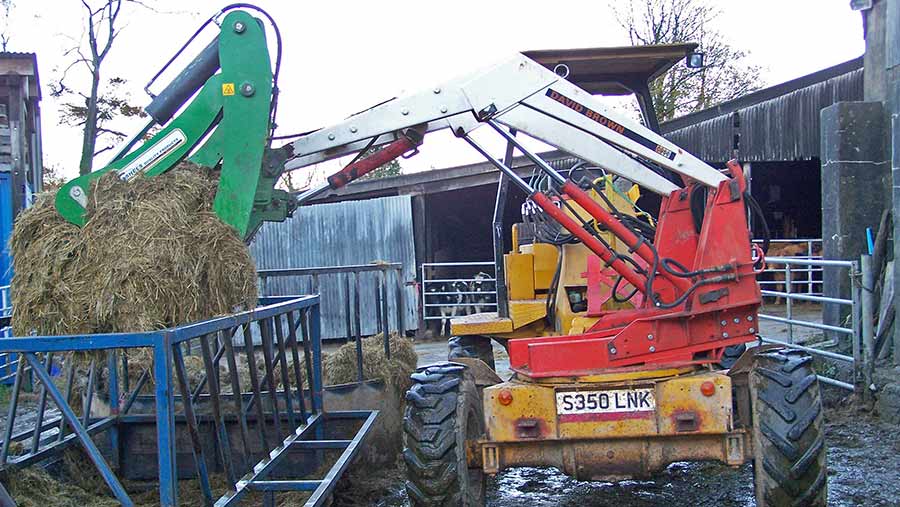 He also lowered the roll bar and fitted a roof canopy to provide some protection from winter rain, which also provides a handy mounting point for the lights.

It is used daily through the winter for feeding and bedding, and it also works on the silage clamp in early summer. He’s also fitted greedy boards to the removed skip, so it makes a neat dump trailer.

Scraping down the stalls, applying Actisan disinfectant powder and operating the bedder were three tedious jobs that took far too long every day, so he decided to develop a tool to get over 100 cubicles brushed, powdered and bedded in less than five minutes. 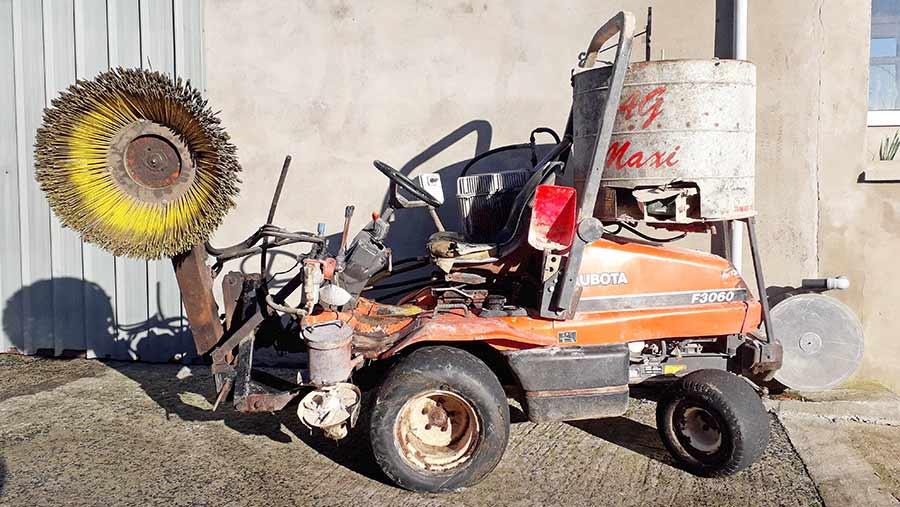 The home-build centred around a diesel-powered F3060 Kubota out-front mower, to which he added several accessories.

Power to the brush is provided by the mower’s pto, which drives a hydraulic pump with its own reservoir and operating controls.

The Actisan applicator was constructed from 8in tubing that holds the powder underneath a wiper motor.

This agitates and regulates the supply of powder onto a revolving disc – driven by a high-speed 12v motor – that applies the powder to the cubicle bed immediately after brushing.

The battery-operated bedder unit was mounted on top of the tractor unit and means all three appliances are individually controlled.

Grabbing the second spot in the complex category is Harry Wiseman from Kings Lynn with his ingenious bale spreader that’s designed to work in the narrow muck passage of a pig shed. 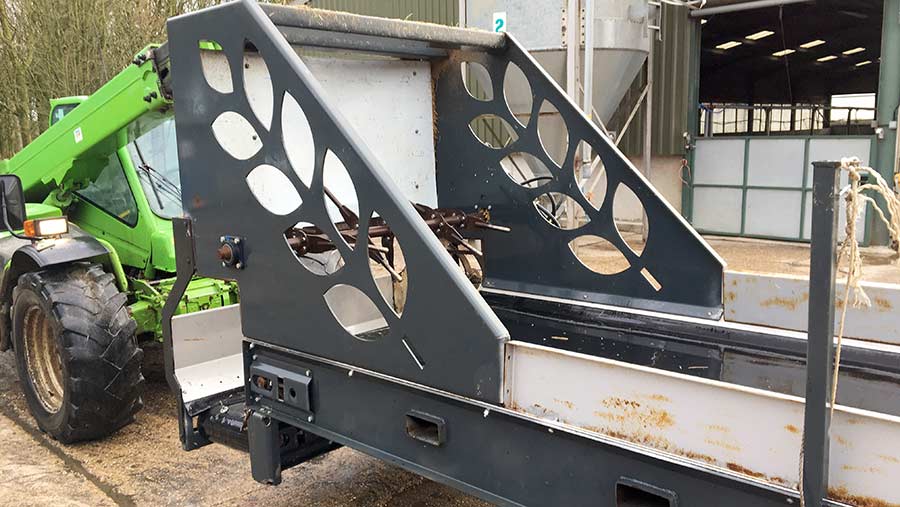 He came up with the concept after failing to find a suitable machine on the market. But before cutting a scrap of metal, he thrashed out the design on the 3D software package Solidworks.

Once he was happy, he got the main components laser cut and folded at a local engineering firm, before carrying out fabrication and fitting in the farm workshop.

His final creation mounts on a telescopic handler and will evenly spread square bales (of various sizes) up to 12m out of the left-hand side.

It starts by picking up the bale – providing it’s been placed in a staggered position – and once the strings have been removed the spreading process can begin.

A slow-running primary rotor kicks things off, by breaking up the bale and feeding into a high-speed secondary rotor mounted at the end of a cross conveyor. This then flings the straw out into the shed.

No chopping is carried out, which Mr Wiseman says significantly reduces the amount of dust created.

He can reverse the cross-conveyor too, allowing straw to be jettisoned out of the right-hand side, directly into the muck passage. This makes good use of wet bales and reduces waste, he says.

In order to reduce blockages, an automatic relief function is incorporated into the hydraulic system that pauses the main delivery belt when pressure builds on the primary rotor.

The on-board hydraulic system is fairly complex with various check valves for setting oil flows, but connection to the telehandler is simple, with just a feed and return pipe plumbed into the third service.

Operation is then handled with the handler’s standard rocker switch.

The parts bill added up to about £6,000 and it took a couple of weeks to do main fabrication. However, he’s spent the past year testing and carrying out modifications to get it working the way he wants.

Seasoned inventor Albert O’Neill returned to this year’s competition to claim the simple category’s second prize with a slat trolley for removing and installing concrete slats that he says has improved safety when working around slurry tanks. 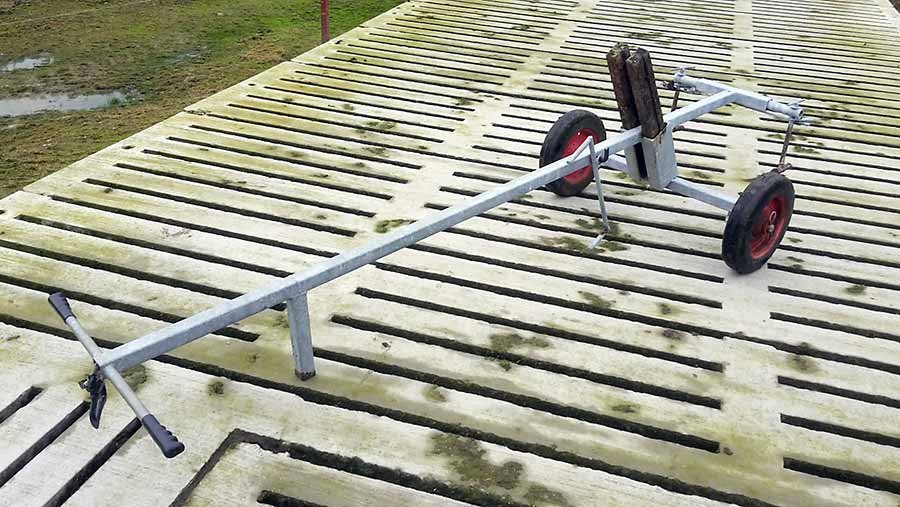 The nifty kit includes a small galvanized bar to clear muck from the gaps in the slat so the trolley T-bars can be lowered into position.

These T-bars are connected in a linkage that uses a tie rod to keep them running parallel to one another. They’re spring-loaded too, so always stay in the locked position for lifting out the concrete decking.

To turn the bars through 90deg, the operator pulls a handle connected to a rope running down the inside of the main box-section frame and onto the linkage. To stop any snags, the rope runs on chain link runners to provide rounded edges.

The front linkage hangs from a pipe sat inside a length of box-section, so swings freely and means the slat always dangles level while the main frame pivots up and down.

There’s also room to carry a couple of wooden skid blocks to sit the concrete slats on once they’ve been removed.

Thomas Simpson made a barrier to block protect his silage clamp from thieving starlings. 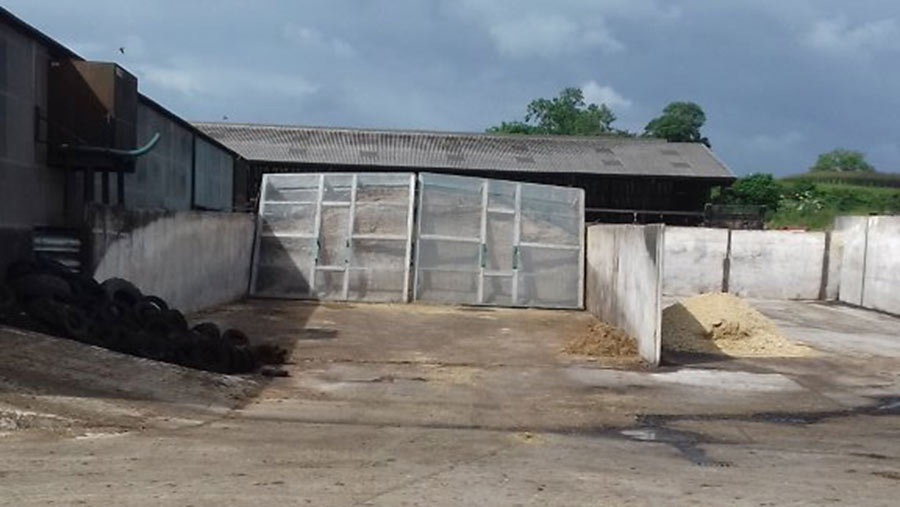 After a trip to the local scrapyard, he came back with some galvanised crash barriers that formed the basis of the 4.8m high and 6m long frames.

A number of 2.4×1.2m galvanised mesh sheets were then laid over the top to act as the barrier, with a 90deg angled roof section to cover the exposed maize area on top of the clamp.

Cleverly, he has installed a set of JCB Q-fit brackets on the frames, so they can be lifted in and out in seconds after loading the mixer wagon once a day.

It took Mr Simpson five bit-part days to build both structures at a cost of about £1,000.

In a bid to stop his cattle feed box leaking all over the yard, Robert Latham made his own hydraulic auger shut-off. 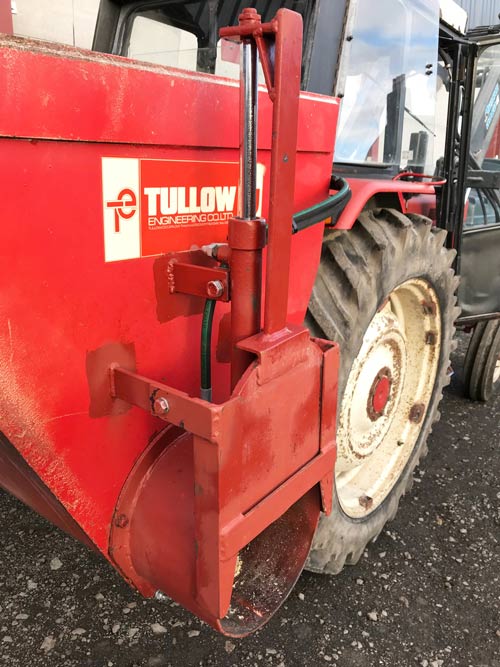 His simple design uses a metal slide attached to a hydraulic ram that runs inside a guide made from angle iron.

The job took about four hours to complete and made use of a double-acting ram off an old flat-eight bale grab and metal that was already in stock.

The only real expense was for two new hydraulic pipes and fittings.

At the end of each feed passage he can now stop the flow from the comfort of the tractor seat.

A workshop-built cubicle rake has saved two hours of manual work every day for John Prior of Upper Combe Farm, near Chippenham.

He spent three days on the assembly job, with most of the structure made from a plough furrow press arm. A hydraulic ram and associated pipework were the most expensive components, totalling £100.

When folded, it sits within the footprint of the New Holland T4.55 tractor and never needs to be taken off. 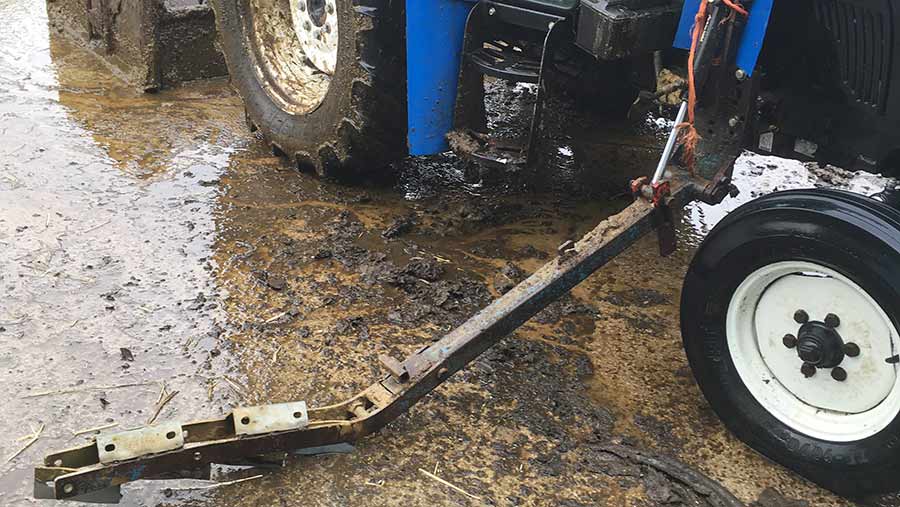 He says it does a better job of levelling 240 sand cubicles twice a day than any person could manage. They’re also far drier, which has improved lying times and reduced instances of mastitis, therefore trimming the farm’s antibiotics use.

Having upgraded his Allflex herd monitoring system to a more powerful device that can scale hills and look through trees, Edward Dean needed to find a way of fixing it remotely without relying on a constant power source.

The new Sensetime kit, which he sourced as part of AHDB’s Strategic Farm project, runs a cloud-based system rather than storing all the information on the PC as before. 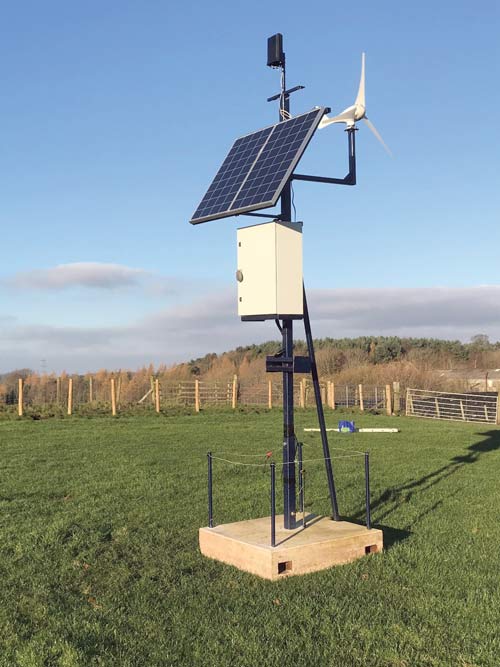 This meant that if he could rig up something to power the new unit, it could be moved to follow the heard and capture their data.

The mast was made from mild steel box section, which sits in a concrete base with pallet tine holes for easy transport.

Solar panels are mounted on a frame that can pivot to suit the height of the sun.

Power for the mast initially came from the ECO worthy solar panel kit.

However, the night vision cameras drained the battery, even with the addition of a trickle-charge wind turbine.

To get around this, a suitable power converter was installed that bypassed the inverter.

A 4G router and the IP (image protocol) cameras are powered off this controller, along with USB pan and tilt camera to monitor the temperature, charging voltage and battery health.

To keep things cool, a 12v fan was installed on the inlet vent of the cabinet controlled via a basic room thermostat.

To help conserve power, a timer switches the unit off between 11pm and 4am and also reduces the amount of data it transmits, as Mr Dean found the 2GB monthly limit on the EE 4G sim was easily exceeded.

One benefit of the new controller is that it automatically switches back on when the battery voltage rises to 12.1v, having switched off at 10.8v.

To date, the unit has been moved around the periphery of the barns to cover at least four different fields.

The most expensive part of the build was the electronic wires, components and solar panels at around £780. The mast materials cost £140 and the internet data package is around £15 a month. 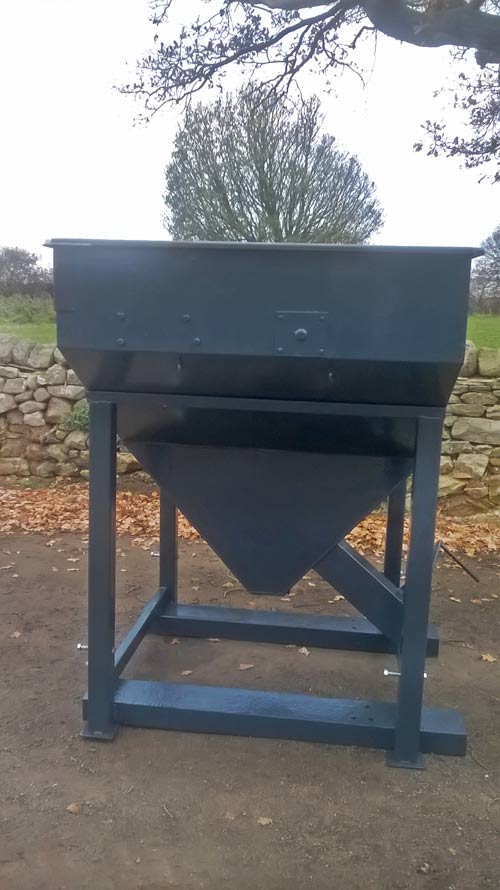 It cost John Forster just £75 to build his hopper/dispenser for bagging flowable animal feeds from bulk, thanks to some pretty keen upcycling of old gear.

The hopper unit was once a vintage Taskers fertiliser spreader and the bottom section came from an Almet dryer.

The spout section was assembled from various bits of grain ducting and the cover was from a Tive spreader.

However, he did source new steel for the upright legs.

In all, he says it saves a huge amount of time bagging cake for the cattle twice a day and can easily be filled with the telehandler.

His creation is based on the main sub-frame of a tractor-mounted McConnell Ditch King backhoe.

To start his adaptation, he removed most of the clutter, including the main digger arm, and mounted a folding length of angle-iron to the right side.

This is studded with 22 holes carrying bolts, which are dragged through the sand to create a combing effect.

At the same time, a wooden block set at an angle scrapes the heel curb to push any wayward sand back into the cubicles.

To complete the job, the old backhoe frame was glued to a vintage Browns yard scraper, which means the rig sits well away from the back of the tractor to provide a better view of the working arm. 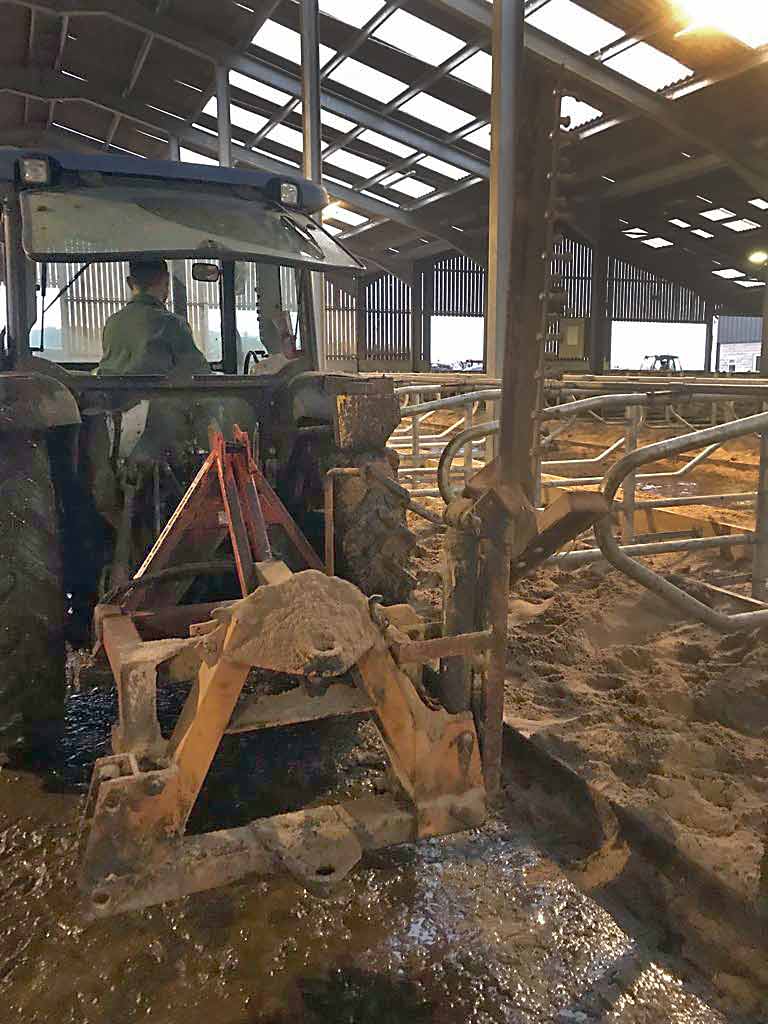 The build took four days and required no new metal – it was all recycled from around the farm.

Purchased items extended to welding rods, nuts and bolts, and two male oil fittings – a grand total of less that £50.