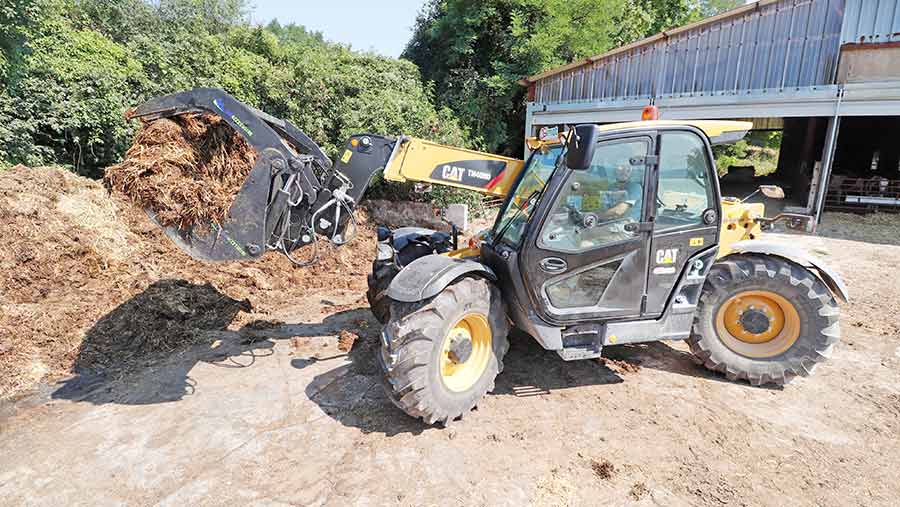 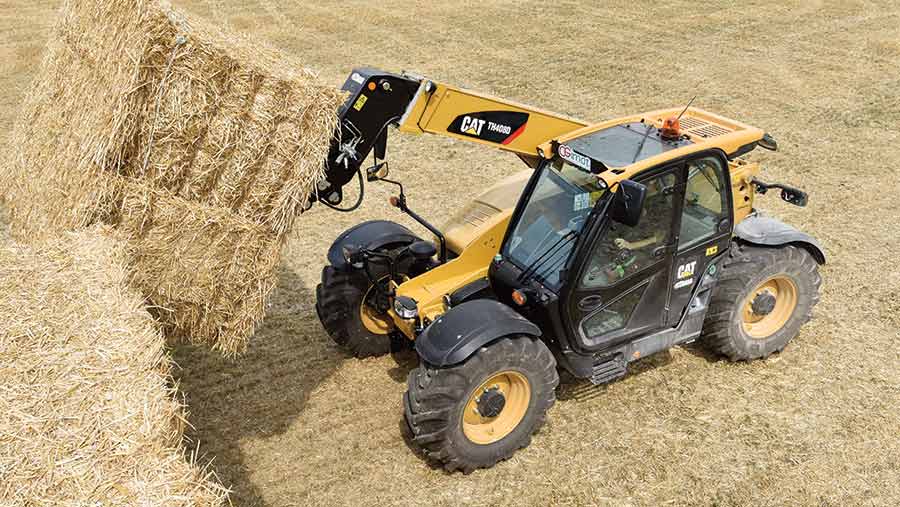 In a test group dominated by hydrostatic drivelines, the Cat’s powershift gearbox gives it a few notable selling points.

For trailer towing, this mechanical driveline offers fairly peppy performance and there should be less risk of overheating the oil than there is with a hydrostatic. It also seems gutsy when pushing into a muck heap.

However, you don’t get the silky smooth take-up of drive, which we really noticed when hopping out of the hydrostatic handlers.

As it was slightly larger than the rest of our group, the Cat delivered strong lifting performance. The flipside was that this made it the longest and heaviest machine on test, but it was surprisingly manoeuvrable.

Build quality seemed good, but we were less impressed by the abundance of unfathomable switches littering the dashboard. 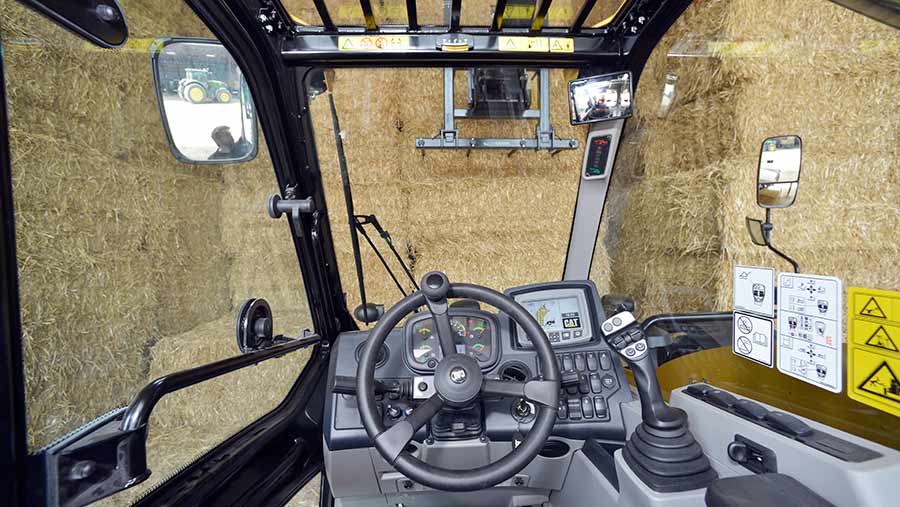 The downside is that it makes it the highest machine in the group by a clear 4cm, so it’s not the best choice for tight yards with low doorways. At 88cm, the cab floor is also a good bit higher than the likes of the Kramer, but generous access through the large one-piece door means it is easy enough to swing in and out.

Part of Cat’s upgrade process from the outgoing 407C was to lower the boom pivot point and put a pronounced slope on the engine hood, resulting in very good visibility to the right-hand side. Views in all other directions are clear too, which helps detract from the fact that it was the longest handler in the group.

The adjustable armrest was also a nice touch and makes it easy for different-sized operators to get comfortable.

Cat has opted for a more traditional control layout that means it’s more intuitive to drive than the Claas and Kramer.

On the left of the steering column there is a big shuttle lever and the twin rocker switches on the joystick handle the tele in/out function and third service.

We are enduring fans of the left-hand shuttle setup, as it prevents the operator’s right thumb getting tied in knots. However, for those who do like all controls in the right hand, Cat has neatly placed a second shuttle switch on the rear of the lever so you can change direction while still maintaining full control of the boom.

Less impressive is the big jumble of buttons on the dash with a bizarre set of obscure logos that give little clue to what they actually do – we counted 25. Thankfully most of them aren’t required for daily driving, so those hopping on the seat for a short stint won’t need to dig out the manual.

Another upgrade from the outgoing C-series machine is the optional screen on the right-hand side of the dash. This houses multiple functions such as reversing fan timings, the default starting gear and a rear-view camera. There is also a detailed greasing chart that tallies with colour-coded grease nipples on the machine. 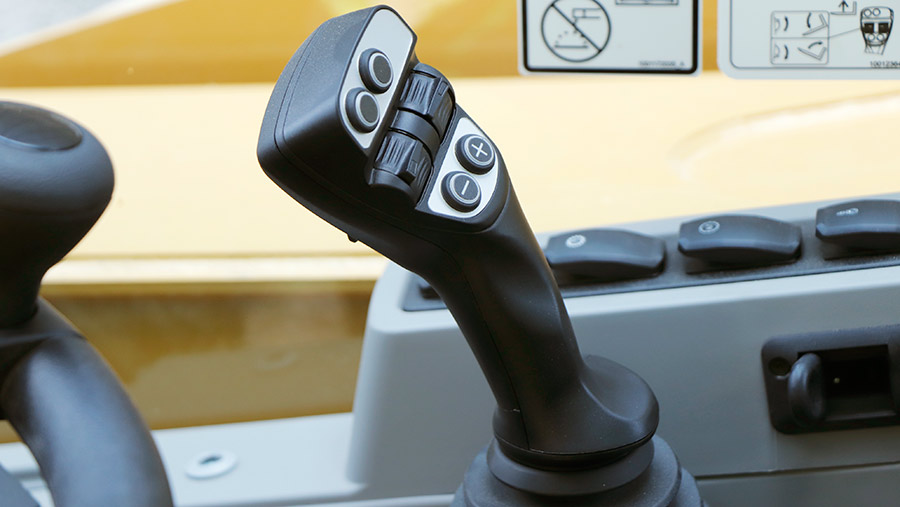 Our test handler came with the top-spec version of Perkins’ 4.4-litre four-cylinder Acert engine. That means it delivers a healthy 142hp and 514Nm torque, putting it at the top of the group in the power stakes.

Unlike some of the other engines, the Perkins relies on Adblue only to get around emissions regs, meaning there are no bulky filters to clutter up the engine bay.

Presumably to help facilitate its sloping hood arrangement, the maker has positioned the cooling pack at the rear of the engine bay. This is fine in itself, but the design exhausts air on to the ground, which could kick up an almighty dust cloud in a grain store.

The TH408D was the only machine in this year’s test to run a mechanical powershift gearbox. The main benefit of this is its ability to pull trailers.

Cat publishes a 12t towing capacity and with six gears to play with, the operator can make the most of the 142hp on offer.

These gears can be shifted manually using buttons on the joystick or automatically by selecting the auto-shift function.

The only real downside with the transmission in our eyes is that you get a slightly jerky engagement of drive, which you particularly notice when hopping out of a hydrostatic machine. 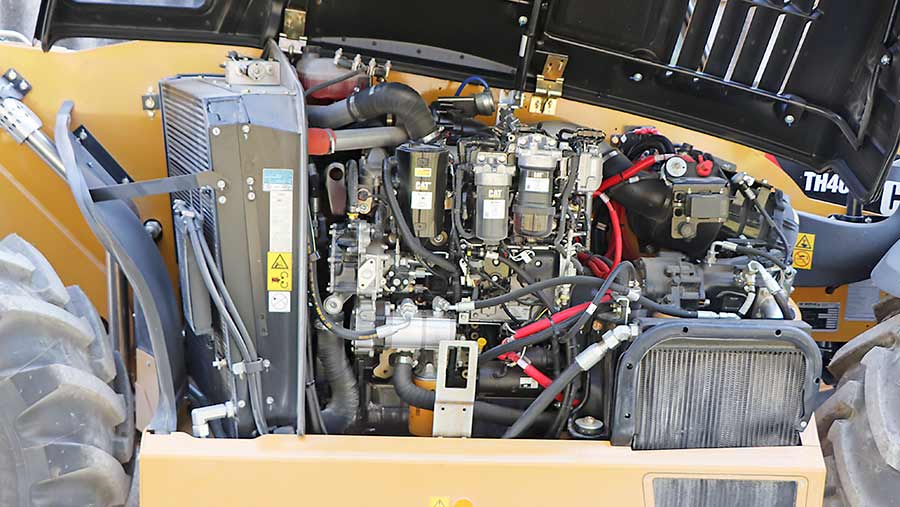 The Cat’s elongated boom trumped the rest of the test group in terms of reach.

And its long chassis and heavier weight meant with the boom retracted, it comfortably lifted the most too. Things evened out at full height though.

Despite the extra distance the boom had to travel, the 140-litre/min pump managed to deliver a respectable complete cycle time. It was also the second-fastest machine to raise the boom (trailing the Claas) and the fastest to lower it.

To allow the machine to be quickly tailored to different jobs, Cat offers two customisable hydraulic modes. These allow flow rates to be adjusted for different functions so you can do things like slow down the crowd and tip function for greater accuracy. 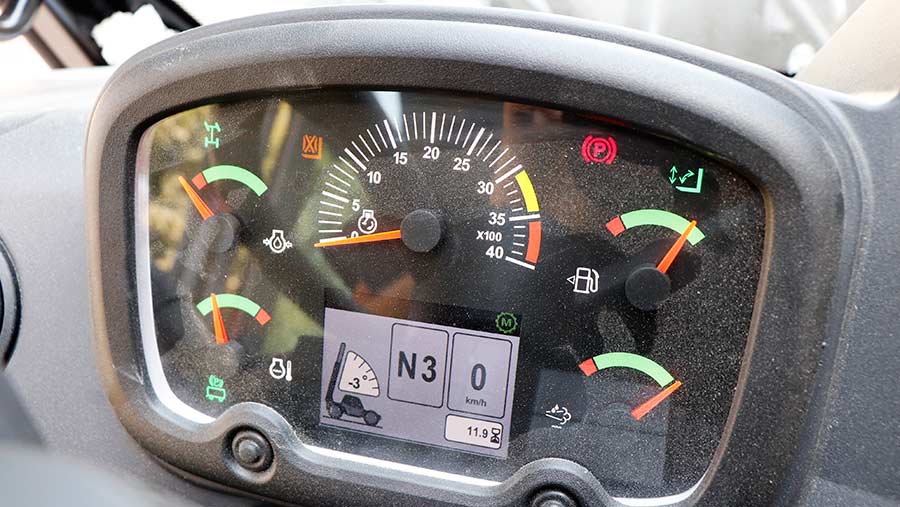 Caterpillar has been in the telehandler building business for more than 25 years, but it only fairly recently started building specific ag-spec models.

As of 2018 the maker offers three models to the agricultural market, starting with the TH357D, which has a 3.5t lift capacity and a 7m reach. Buyers have the choice of a 111hp or 124hp engine and the transmission is the same six-speed powershift that’s used throughout the range.

Our TH408D sits in the middle of the range with its 4t lift capacity and 7.6m reach. With no compact handler in its line-up capable of lifting 4t, this is the closest spec to the rest of our test group. There are two engine choices on offer – the 142hp/514Nm Perkins Acert in the machine we tested and the smaller 124hp version also used in the TH357D.

The big boy of the range is the TH3510D which, with its 10m reach and 3.5t lift capacity, is likely to appeal to contractors. As some of these machines will only be used for stacking, while others will be required to tow, all three engine choices are available on the options list.