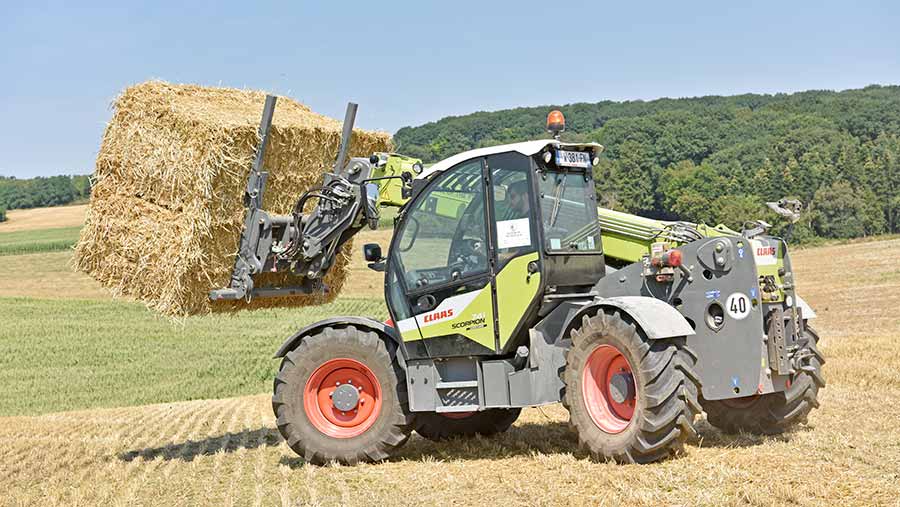 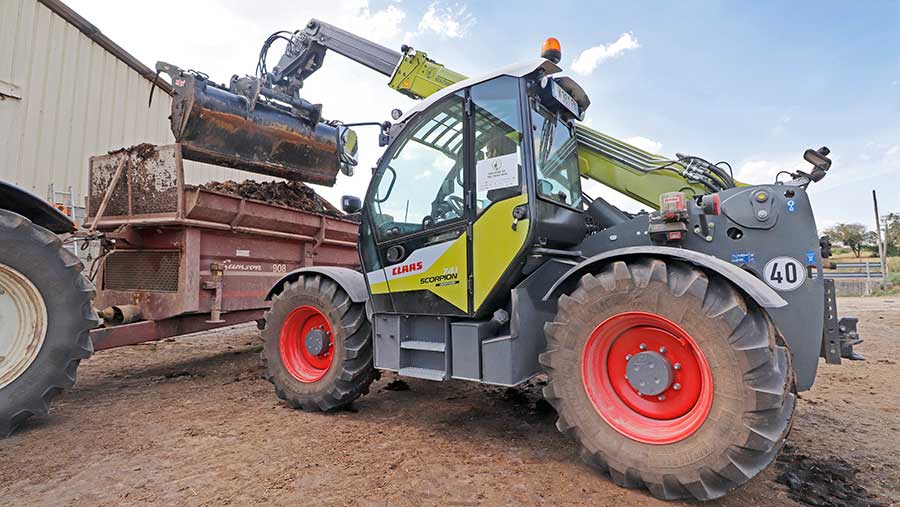 Despite a change of manufacturer, the new Scorpion bears an uncanny resemblance to its predecessor now dressed in Kramer colours – the two share the same engine, transmission and a good chunk of the controls.

The company has got plenty of things right, including views outwards that are good enough to compete with the best on the market and a clear, uncluttered engine bay layout. The two-stage brake system also works well around the yard and saves working a separate dump pedal when needing to speed up engine revs for peppier hydraulic performance.

However, it was let down by its pokey, hard-to-access cab that has a major shortage of legroom, a lack of underbelly protection and some vulnerable-looking pipework and wiring.

We felt the Kramer just about has the edge, particularly once price is taken into account.

Scorpion buyers get a veritable greenhouse for a cab, with acres of glass and slim pillars that provide unobstructed views through the headstock lifting arc, rearwards and to the right.

The cab floor is on the high side (90.5cm), which made it one of the more difficult machines to clamber into, not helped by a missing grab-handle on the B-pillar and an unusual combine-style steering column.

It comes out of the floor and sits between the driver’s legs, with the throttle and brake pedals residing either side – just like you would see on any modern harvester.

It’s impossible to leap in and out without moving it each time, but it can also be manipulated into any position you like (it pivots on a foot pedal, shifts in and out, and bends in the middle).

Interior space comes up a little short, particularly in legroom terms, where it measures as one of the shortest machines on the market.

The back of the seat almost kisses the rear window, even with a relatively short-legged occupant at the wheel, which has obvious repercussions for storage space – we couldn’t find anywhere to stash chains or straps.

We also found there were a lot of exposed pipes and wiring underneath the cab frame – particularly compared with the bombproof underbelly of the Massey Ferguson/Bobcat. 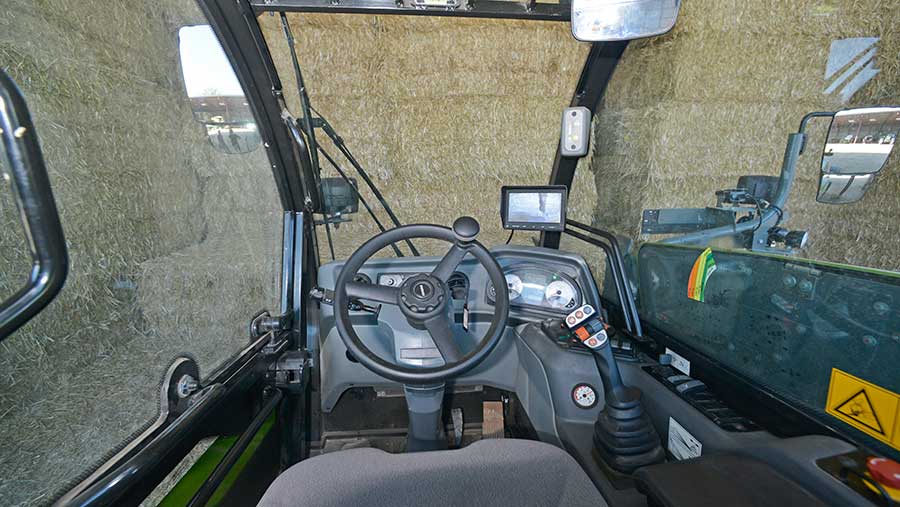 There’s a distinct whiff of Kramer about the Scorpion’s controls, where the two share the same joystick (as does the Cat, incidentally) and both opt to go without a left-hand shuttle.

Instead, a thumb scroller deals with directional changes and returns to centre once forward or reverse has been selected. We considered this a big downside and would much prefer to feel which direction is selected without having to cast a glance downwards.

Sadly, the joystick and armrest aren’t attached to the seat either, making gentle adjustments on the move more difficult.

Most of the other controls are neatly grouped on the right-hand console, aside from the front locking-pin switch. New drivers will go bonkers searching for it (it’s bedded in the roof lining).

Unlike the cramped and higgledy-piggledy layout of the Kramer, Claas has managed to organise its engine bay neatly – even though the two carry largely the same components.

Three radiators are packed together and sit in front of the sideways-mounted 3.6-litre Deutz engine.

Access to regular service items is much easier than its rival, although the position of the AdBlue filler inside the rear wheel leaves it likely to get plastered in mud.

Driveline controls include the usual manual engine and transmission settings.

We found Claas’ version the easiest to use as both speed and engine revs can be set on simple and accurate sliding scales.

A three-stage hydrostatic transmission provides a slick drive, but the real highlight is a neat two-stage brake pedal.

When pressing down on it, the first half of the push disengages the drive, while the second part brakes the wheels. This saves having a separate dump pedal and is really handy around the yard and when stacking bales.

Other small details include the option of setting the angle of the rear wheels – though it’s only really necessary if they come out of line – and an automatic electric handbrake, but we found it difficult to tell whether it’s engaged or not.

The big downside was the turning circle that measured 8.26m, which was the worst of all the machines tested. 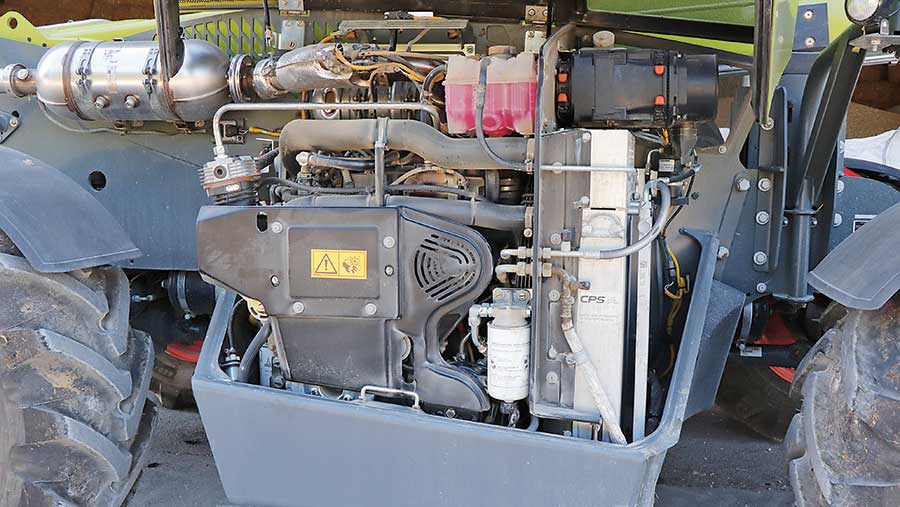 Claas runs a healthy-sized 160-litres/min hydraulic pump and flow rates are very good with the engine idling, which proved useful for bale stacking and loading grain.

However, performance begins to fall behind the competition at 1,500rpm and strangely dropped with the engine at full chat.

Cycle times were also underwhelming – the total cycle of 33.9secs was the slowest of the lot, though it was the boom lift and extend motions that really let it down.

Lift capacity was pretty good (particularly with the boom extended), which sees the Scorpion come into its own when pushing up muck heaps.

Hydraulic pipes run underneath the boom to the headstock, so are pretty easy to get at should there be a leak, but the electrics to alter the oil flow diverter valve on the swan neck had far too much exposed wire.

In-cab controls include adjustment of the flow for the third hydraulic service through the screen and a return-to-position function that we found more reliable than the Kramer’s. 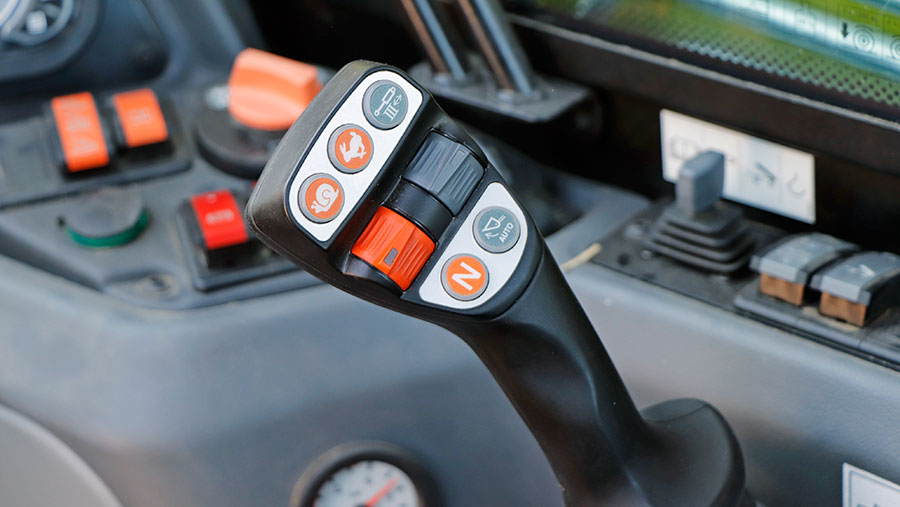 No sooner had Claas’ relationship with Kramer ended than the German firm had hooked up with another construction giant – Liebherr – to source its Scorpion-branded telehandlers.

In truth, the end result bears a striking resemblance to the old Kramer machine, albeit with a few tweaks that include a very different steering column and lower boom pivot.

All the models run Deutz powerplants that are tuned to 136hp in all but the two heaviest-lifting models, which get a slightly pokier 156hp setup.

Similarly, the two big boys get 200-litres/min hydraulic pumps – versus 160 litres/min on the rest – though all use a three-speed hydrostatic gearbox.