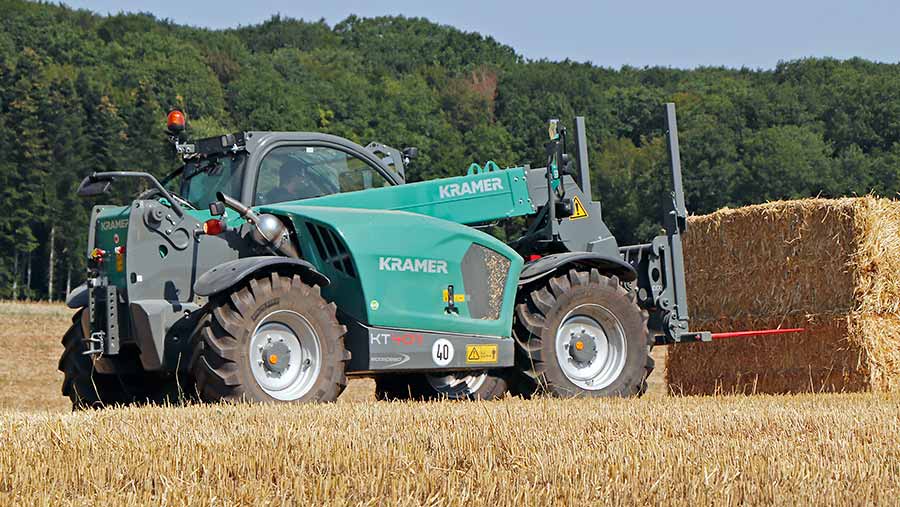 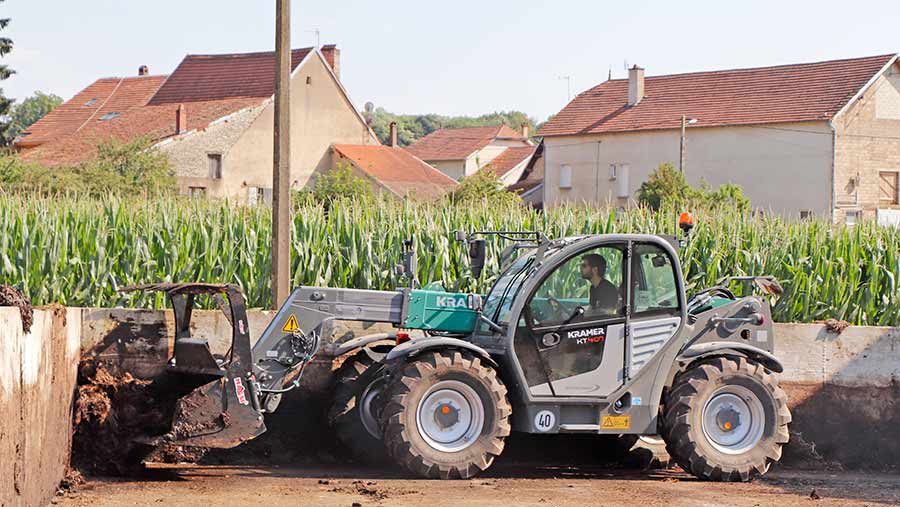 It might be a relatively new name in the UK, but Kramer’s KT machines have clocked up many years’ service under the guise of Claas livery.

The latest incarnation is basically an uprated version of the KT357 that carries a larger counterweight to increase its maximum lift to 4t.

Down sides include a cluttered engine bay that makes basic servicing a pain and the lack of a left-hand shuttle that will be unpopular among many operators.

However, we reckon it’s a sound choice at a reasonable price and worthy of taking the top spot in this year’s test. If you can do without the extra 500kg lift capacity then the near-identical KT357 saves you £4,500. 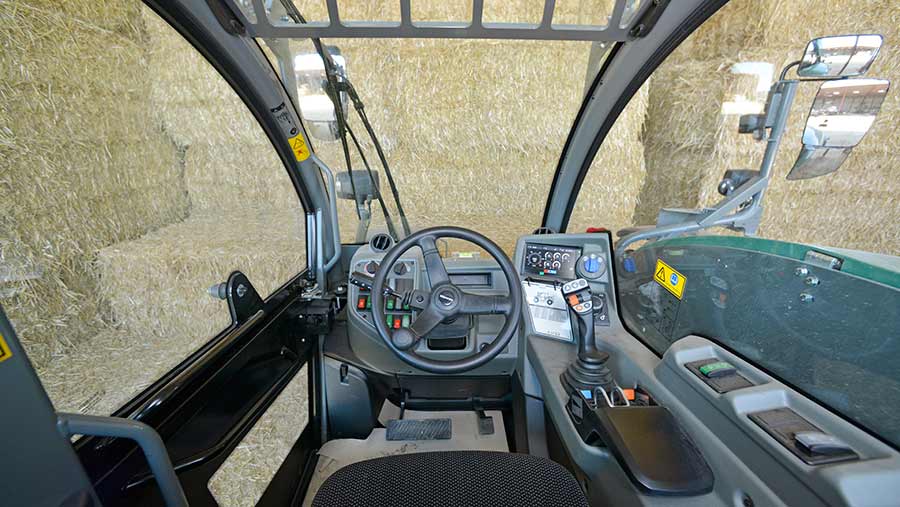 Kramer’s curvy cab frame sits uncomfortably close to the driver’s head, so it feels more claustrophobic than the likes of the Massey Ferguson.

However, the swooping style of the windscreen delivers decent views from shed floor to roof and the cage on the inside of the top section makes the glass easy to wipe clean.

Legroom is more abundant than in the Claas too, and the cab deck was the lowest among our test group (80cm, versus 90.5cm in the Scorpion), which makes access easy and keeps the overall machine height down.

Visibility forwards is helped by the slimline dash, though the bonnet is big and the rear-quarter mudguard remains just about in sight to act as a reference point for avoiding barn stanchions and walls while reversing.

Other noteworthy details include a decent-sized storage bin behind the seat and well-positioned front lights.

There is nothing radical in the controls department, which makes the Kramer a pretty easy drive.

However, plenty of potential buyers will bemoan the absence of a left-hand shuttle. In its place is a stalk to control indicators, windscreen wipers and lights, while directional changes are dealt with by an orange-coloured roller on the joystick.

We found this was too easily confused with the boom in/out and felt having to control everything with a single thumb made operating several functions at the same time cumbersome and awkward. Fitting a neutral button below the roller doesn’t work that well, either.

The joystick itself is a carbon copy of both the Cat and Claas, though each is set up to work slightly differently. It has a pleasant enough feel, but delicate movements could be made easier by attaching both the armrest and joystick to the air-cushioned seat.

Other controls are grouped on a bank to the left of the steering wheel and are labelled pretty well, while the main screen works as a digital dash display (there are no regular analogue dials) and is very clear.

Like the Cat, it promises a lot at first glance, but it’s fairly limited in what it can do and is mainly for changing recording units, showing hours worked and fuel consumption. The leader in this department is undoubtedly Manitou, which featured in last year’s test.

Kramer opts for a 3.6-litre Deutz engine – something it shares with Manitou, Merlo and Claas – which it mounts sideways in an exceptionally cramped engine bay that also contains a little air compressor for the brakes.

Access to some of the regular service items is poor, particularly the engine oil filler cap that is hidden under the clutter of emissions-related components.

On the plus side, it doesn’t blow any air down below the engine bay – it gets drawn through and straight out the back – so bellowing dust clouds are kept to a minimum.

However, the diesel filler is by the rear window, which means you’ll have to shut the top section of the door to get at it.

The hydrostatic setup caries three ranges controlled through buttons on the joystick. Naturally, this provides a much smoother drive than the Cat’s powershift.

As with most of the other machines, Kramer fits a speed limiter (controlled by a blue toggle) and an engine rev limiter, which makes it a doddle to set a steady forward speed or maintain constant revs.

Its fairly modest proportions – and the fact that it shares a chassis with the smaller KT357 – contributed to it delivering the best turning circle on test. It was also the narrowest and, as mentioned earlier, the lowest, so is well suited to those working around old-fashioned yards. 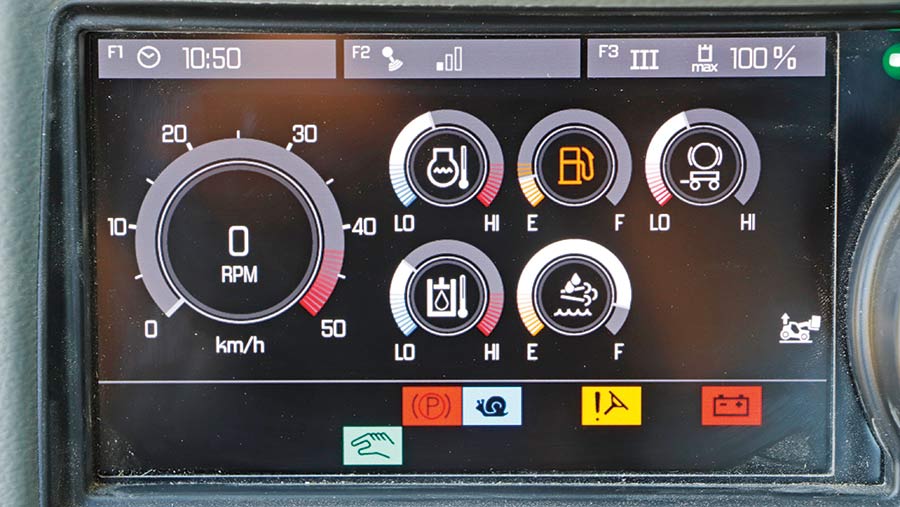 Kramer delivers the most consistent hydraulic performance. Its 140-litres/min pump might be smaller than some of its rivals, but cycle times at full revs are nothing to be sniffed at – particularly compared with the achingly slow results posted last year by Manitou’s MLT 741.

Lift capacities, too, are pretty good when you take into account the Kramer’s size and top-drawer manoeuvrability.

Like a lot of its rivals, the KT is fitted with different working modes that speed up basic lifting and loading jobs. These include pallet mode (where the headstock goes up in a straight line) and bucket mode, which sees the boom retracted as the headstock is lowered. Both are useful, if you remember to use them.

However, we found the bucket position memory less handy, mainly due to its position drifting after only a few loads. 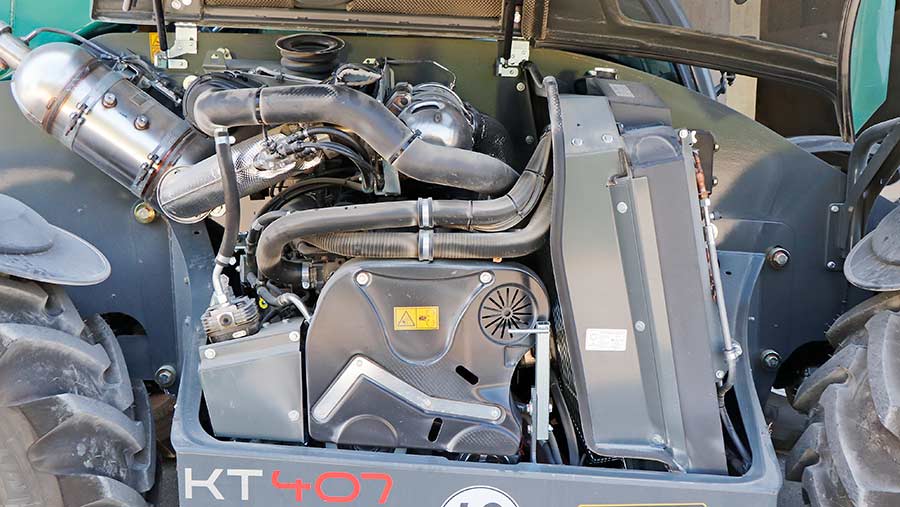 Kramer has been pretty aggressive in expanding its presence in the UK since splitting from Claas.

It hopes to build on the success of the Scorpion (the machine is very similar to pre-2018 models) and has cosied up with several prominent John Deere dealers, including the likes of Doubleday, Tallis Amos, Ripon Farm Services and R Hunts.

Construction specialist Wacker Neuson owns both Kramer and Weidemann and, although it’s a massive company, we wouldn’t be surprised if the machines eventually turn up in Deere’s green and yellow colours.

The ag-spec range includes 10 models that all run Deutz engines and have the same three-speed hydrostatic transmission.