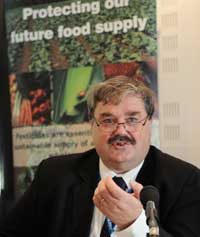 British farmers should not expect a future free from regulation if they are going to properly tackle food security and environmental challenges, the RSPB has warned.

Speaking at the Conservative party conference in Manchester last week (8 October), RSPB conservation director Mark Avery (above) said sensible regulation was needed to create an agricultural industry that was fit for the future.

And he said farmers could not expect to continue with “business as usual” without more burdensome regulation being demanded by the public.

“We are going to need a different idea of farming in future,” he told delegates at a Crop Protection Agency fringe event.

“It’s fair enough that the public will expect to have some say in the way you farm given you get your Single Farm Payment from public money and some of the costs that agriculture imposes on the public are ones we all bear.”

Mr Avery said consumers paid £400m a year to remove nitrates from water as a result of fertilisers being used on farmland.

“The public puts a lot of money into agriculture and pays for external costs, so you are not going to farm in an unregulated industry,” he added. “But we need sensible regulation and we need a clear regulatory framework to create an agriculture that’s fit for the future.”

Shadow farm minister Jim Paice said it was important farmers were trusted to behave responsibly to produce as much food as possible in an environmentally-sustainable way. “I want to create the environment where farmers can farm by removing regulations and trusting them to do what needs to be done.”

Mr Paice said the EU believed Britain did not care about agriculture, but it was possible to turn that view around by farmers showing they were committed to producing food responsibly.

The EU had brought in a raft of damaging regulations, such as the electronic identification of sheep and the pesticides ban, which only damaged farmers’ ability to meet food demands, he added. “The only way to address this is more engagement in Europe and we are happy to work with Europe when it’s needed.”

What do you think about the food and environment debate? Read other farmers’ views in our food security forum on FWi.