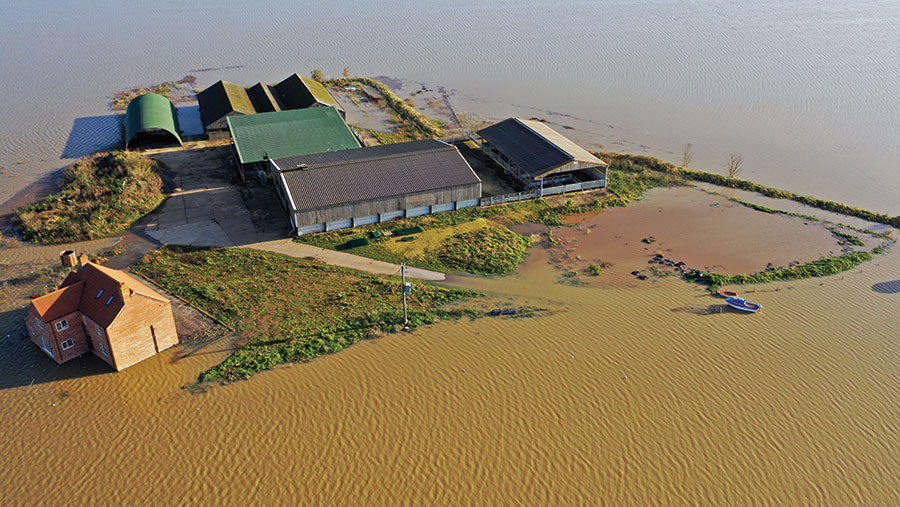 Poor water management could see a repeat of last autumn’s floods, so what steps can be taken to mitigate the effects of extreme weather on the countryside and farmers’ livelihoods?

We speak to a farmer who has experienced extensive flooding to find out what he thinks needs to be done and look at some proposed solutions to the problem.

See also: Why government needs to listen to farmers for flood strategy 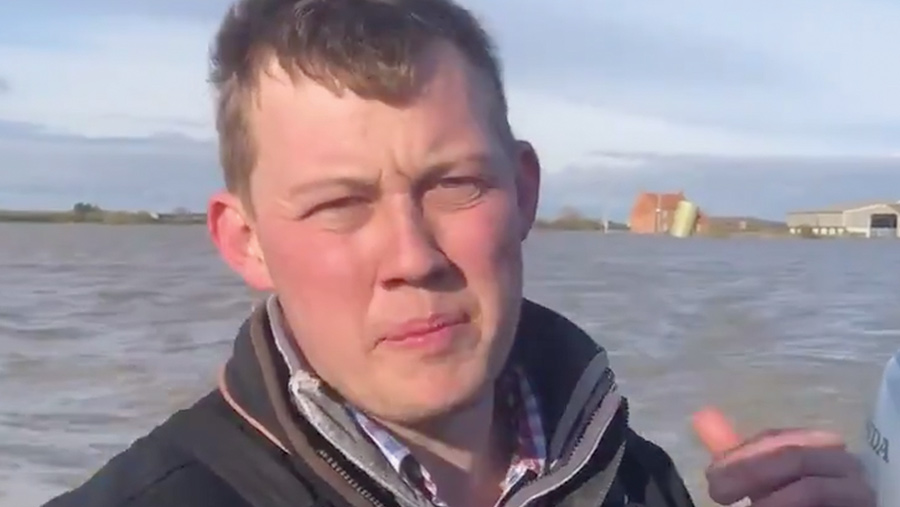 Henry Ward on his flooded land in 2019

Henry Ward hit the headlines last year after his farmhouse was left marooned by flood water at Short Ferry, nine miles east of Lincoln. Some 400ha of local farmland flooded when the Barlings Eau watercourse burst its banks on 9 November 2019.

Almost one year on, Environment Agency workers are still on site and continuing to clay up the river bank, says Mr Ward. The repair work is likely to be completed by the end of November, he adds.

“It’ll be over a year from the breach date to get the riverbank back to how it should have been. I don’t know why it’s taking so long, but I’m just pleased to see it actually getting repaired properly now so hopefully it is water tight before winter.”

Mr Ward believes the flood has cost him some £80,000 in damage and lost crops. Much of the land was due to be planted with potatoes this spring. But it was in such a poor state after the water subsided that he drilled it with spring cereal crops instead.

Clearing the land, waiting for the soil to dry and then cultivating it involved spending a lot of time and money. It was also hard work – made only slightly easier by an exceptionally hot and dry April and May.

“If it wasn’t for that, we wouldn’t have got anything in,” he says. “It saved us a bit and allowed us to get a crop in – all spring barley. We were lucky to get some roots into the ground to dry the land out.

“It was getting late – it was about 7 April when we finally got down there – the second week of April before we decided it was dry enough to actually do any good by getting on and cultivating it.

“The biggest thing was patience – leaving the land lying for long enough so we weren’t going to make a mess. Then we went in with a subsoiler because it was [so hard] it was like it had been steamrollered down.” 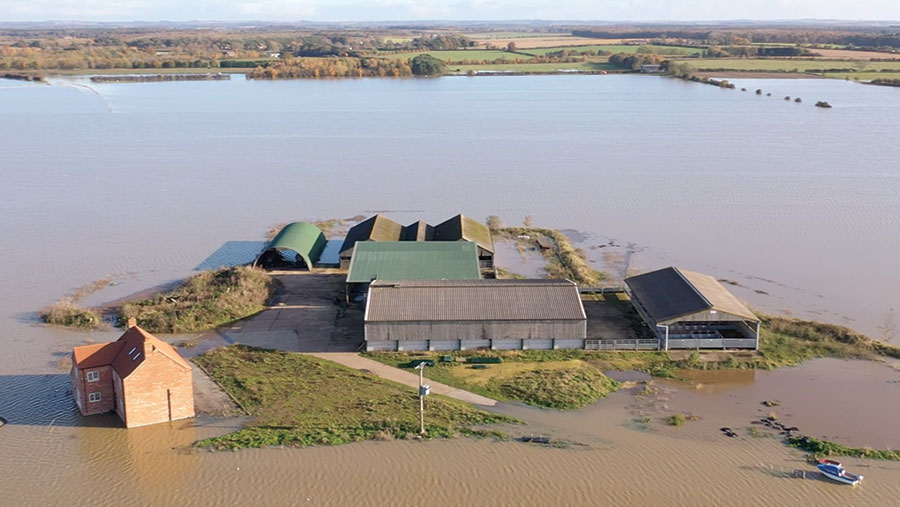 A Heva combi-disc followed – a single-pass machine with discs and a packer roller – before the crop was sown using a Vaderstadt drill. Mr Ward says he then let the land dry out more before deciding how to manage it.

“I didn’t buy any certified seeding or anything like – so just used home-saved and kept it cheap and cheerful – we took a bit of a risk on it really because we didn’t know what was going to happen.

“Once I was confident we had got a crop established, then I spent money on it and treated it as a normal spring barley crop – we made sure we put plenty of fertiliser on it to try to get it away and then sprayed it as normal.”

It turned out to be the right decision. Some 90% of the land was eventually harvested. It yielded about 6t/ha, recovering a little of the money spent. It wasn’t the best yielding crop in the world, says Mr Ward, but it served its purpose.

“It’ll be over a year from the breach date to get the riverbank back to how it should have been. I don’t know why it’s taking so long, but I’m just pleased to see it actually getting repaired properly now so hopefully it is water tight before winter.”

Since then, the land has been turned around again. This autumn, it was drilled to winter wheat. But Mr Ward believes it will take another year at least before it is back to its normal productive condition – and only then if it doesn’t flood again.

What needs to be done

A longer term strategy is needed rather than a make-do-and-mend approach, he adds. “We’re on the road to recovery – the [river]bank is getting mended to a good standard. But what worries me is a riverbank is only as strong as its weakest point.”

Mr Ward says the focus should be on basic waterway maintenance to convey water through lowland areas as quickly as possible. But policymakers should take a more ambitious approach to water management too, he adds.

“We have to think seriously about storing water on areas of land that aren’t productive. I’ve plenty of low-lying land that isn’t as productive as the farm that flooded. We ought to be storing excess water through the winter to utilise in periods of drought later.”

Having seen both floods and then drought within the space of six months, Mr Ward says it is important to prepare for every eventuality. A serious rethink is needed because extreme weather is only going to become more frequent, he adds.

“We’re blessed with water in in this country and it’s a precious resource that we need to manage properly. We’ve got to do something more than just patching up the damage – otherwise we’ll be here again.”

For schemes to be successful, Mr Bramley said it was vital to avoid the payment delays experienced by farmers in countryside stewardship. “If we start to get a repeat of that sort of scenario there will be real difficulties,” he added.

An Environment Agency spokesman said: “We completed emergency repairs in December 2019. This work sealed the breach and reinstated the defence. Since then, we have been working to design and build more permanent repairs – not just at Barlings Eau but at all the locations damaged by last winter’s record-breaking rainfall.

“Work has, of course, been slowed down by the impact of Covid-19, but we expect permanent repairs to be completed in early 2021. We continue our efforts to reduce the risk of flooding.”

SuDS are slow stores of flood waters, especially from roofs and roads, where water is intercepted by vegetation and then stored in temporary ponds. They are increasingly used as replacements for traditional drainage systems in new developments.

One in six properties in England are at risk of flooding, with 85,000 new homes built in high flood risk areas since 2013. That number could increase as the government renews its efforts to build 1m new homes by the end of the current parliament.

A report by geographers at Durham University says SuDS and other nature-based solutions should be used to slow the pace of water in built-up areas. It is a view shared by other experts, who see SuDS as crucial.

Richard Dawson, of the Committee on Climate Change, says: “Every time we add new buildings – new impermeable land to our built environment – we are essentially adding to the run-off from that and pushing flood impacts further downstream.”

Adapting to wetter ways of farming could be better than reducing flood risk for some growers and livestock producers, says an environmentalist.

Ali Morse is water policy manager at the Wildlife Trusts and acting chair of Blueprint for Water – a coalition of environmental groups which wants to see 30% of land and sea “restored for nature” by 2030.

The Blueprint for Water group argues that natural flood management solutions should be a component of all flood risk schemes. And Ms Morse says wetter ways of farming – including different enterprises – should be embraced by some producers.

“That will not be a solution everywhere, but in certain locations it can be a technically and economically viable alternative to protecting places from flooding or carrying out drainage management to transition to crops that thrive in wetter soils.

“There is some really interesting research happening, particularly on peat soils – around growing crops like sphagnum moss – which provides an alternative to peat extraction and can then be used in the growing industry,” she says.

What MPs are doing

MPs examining the long-term impact of flooding were told farmers have a key role to play in flood management – but must be properly rewarded.

An inquiry is being held by the House of Commons environment, food and rural affairs select committee. In its latest session, MPs heard evidence from Yorkshire farmer and NFU environment forum member Richard Bramley.

A longer term approach will be vital for farmers to manage water and reduce flood risk to people and properties under the government’s forthcoming environmental land management scheme, Mr Bramley told MPs.

“It is not something that works in five‑year cycles. You commit to it, and you commit to it long-term. That means everybody has the confidence that that scheme is then going to deliver for many years to come, because that is what it needs to do.”

Funding could come from multiple sources, suggested Mr Bramley – including private companies. But it should be properly co-ordinated and paid on time, recognising the true value of flood management.

“If you undertake to create a semi‑reservoir that protects a village of 500 people from flash flooding, that has a value. It can be calculated. That is what you would want to see. Payment for public goods is supposed to provide that support.”

For schemes to be successful, Mr Bramley said it was vital to avoid the payment delays experienced by farmers in countryside stewardship. “If we start to get a repeat of that sort of scenario there will be real difficulties,” he added.