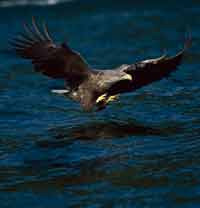 Natural England has pulled out of a controversial conservation project to reintroduce sea eagles to East Anglia.

Crucial savings in public funding mean the government’s landscape agency will not be continuing as a lead partner in the project, which it was undertaking jointly with the RSPB. Instead, it will concentrate on other commitments to biodiversity conservation.

The sea eagle, which has an eight-foot wingspan, is also known as the white-tailed eagle. Believed to have existed in England until the 19th century, plans to establish a colony of 75 birds in Suffolk have been dogged by controversy.

Natural England and the RSPB had carried out an extensive programme of work to assess the feasibility of the project. But many farmers had voiced fears that the birds of prey would target young stock especially outdoor pigs and poultry.

Natural England chief scientist Tom Tew said: “While it will be a disappointment to many that we must withdraw at this stage, we did not think it was in the interests of the public, nor the many people involved, to delay this decision, which is inevitable given the future financial situation.”

A report from the Food and Environment Research Agency looked at a variety of circumstances where sea eagles might conflict with farming interests. It recommended paying farmers for extra-shepherding costs, the planting of woodland and provision of artificial shelters.

Dr Tew said: “Natural England is keenly aware of the reduced funding that will be available to public bodies over the next few years. We have taken this into account when reviewing the substantial body of evidence gathered by the feasibility study.”

All the evidence suggested that a reintroduction would have met all the international criteria and would have been successful. But Dr Tew conceded that the reintroduction of a large raptor was an expensive and difficult operation.

Work to date had shown both support and opposition to the project. Natural England had listened to both sides of the debate. “We will honour our commitment to publish the work that the project has undertaken thus far and this may inform any reintroduction project that is planned in the future.”

The RSPB said reintroducing the sea eagle would remain a priority. The charity recognised that financial restrictions meant some projects needed to be delayed. But the programme had been postponed, rather than curtailed, suggested conservation director Mark Avery.

“We are very concerned that wildlife conservation will be hit very hard by the financial stringencies ahead. We call upon the government to ensure that investment in nature conservation is not turned off at a time when the UK is already failing to meet its own biodiversity targets.”

The reintroduction of sea eagles to Scotland had boosted the local economy through tourism opportunities worth millions of pounds a year, said Dr Avery. “Those benefits will now not be delivered to the local communities [in England] as quickly as expected,” he warned.

But landowners welcomed news that the project was to be dropped. William Worsley, president of the Country Land and Business Association, said: “This is absolutely the right decision for the rural economy and wildlife.

“A population of sea eagles could have had a significant economic impact on the livestock industry in East Anglia. Free range pig and poultry producers could have been particularly seriously affected.”