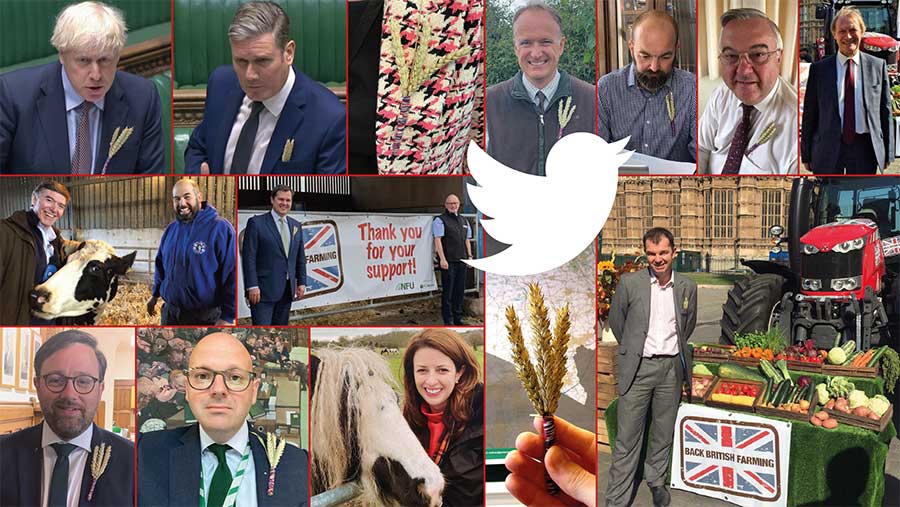 Dozens of MPs and others have posted photos and messages of support for farmers to mark the NFU’s Back British Farming Day.

Prime minister Boris Johnson and Labour leader Sir Keir Starmer were among those who wore a wool and wheatsheaf pin badge during prime minister’s questions (PMQs) as a sign of solidarity for farmers.

NFU leader Minette Batters used the day to push for parliament to be given a final say on trade deals, which threaten to undercut British farmers and the high welfare and environmental standards of UK agriculture.

“It is very clear to me that the people of this country have drawn a line in the sand. They do not expect to see food imports that do not meet the high standards to which we produce to here,” tweeted Mrs Batters.

"It is very clear to me that the people of this country have drawn a line in the sand. They do not expect to see food imports that do not meet the high standards to which we produce to here." #BackBritishFarming 🚜🥩🥕🇬🇧👩‍🌾 pic.twitter.com/Lyxu2lfeQ6

More than one million people have signed a petition urging the government not to undermine British farmers by allowing low-quality food imports into the country through trade deals with the US and others.

“This autumn will be a critical time for British food and farming, as the Agriculture Bill returns to the House of Commons to be passed into law and trade negotiations continue with countries across the world,” the NFU said.

“There has never been a more important time to highlight the crucial role farmers play in feeding the nation and caring for the countryside.”

I #backbritishfarming
As an MP and vet, I am proud to stand up for our Cumbrian and UK farmers. With our high animal welfare and food production standards we can be a beacon to the rest of the world.#BackBritishFarmingDay@NFUtweets @Minette_Batters pic.twitter.com/SkpVDZ6Ems

Today is #BackBritishFarming day, when we celebrate the incredible contribution of our farming community to our economy, countryside, natural environment, health and rural life.

Last week I met up with Nottinghamshire farmers to say thank you for all their hard work.🌾 pic.twitter.com/LjU62IdIZg

Today is #BackBritishFarming day. In High Peak, we have fantastic farmers, who produce delicious food and help manage our beautiful countryside. I’m proud to back them. pic.twitter.com/TtOqXar7OO

It's #BackBritishFarming day!🇬🇧 #Northumberland’s farmers are so important to our local community, and have worked hard during the Covid pandemic to fill our plates, and keep us fed so I, and many others, want to say thank you 1/: 🥳🎉🧑‍🌾 pic.twitter.com/vhoBzNASRs

MPs were not the only people to get behind the messaging of #BackBritishFarming day.

Celebrity chef Raymond Blanc posted a photo on his Twitter account of himself wearing a wool and wheatsheaf pin badge.

He tweeted: “I’m very proud to wear the wheat-pin badge to support and celebrate British farmers, local produce, and beautiful British ingredients we are so truly lucky to enjoy. Let’s support our British farms.”

Farmers Weekly staff members also got in on the act with their own special tributes to farmers.

Brandishing his wheatsheaf, editor Karl Schneider said: “In an increasingly uncertain world, it’s never been more important to #BackBritishFarming – not just today, but every day.

In an increasingly uncertain world, it’s never been more important to #BackBritishFarming – not just today, but every day. pic.twitter.com/Q2AnC2yrfk

And FW news editor Philip Case uploaded a video on his Twitter account sinking a pint of milk to say thank you to dairy farmers for working hard to supply milk and other dairy products to feed the nation during the coronavirus pandemic.