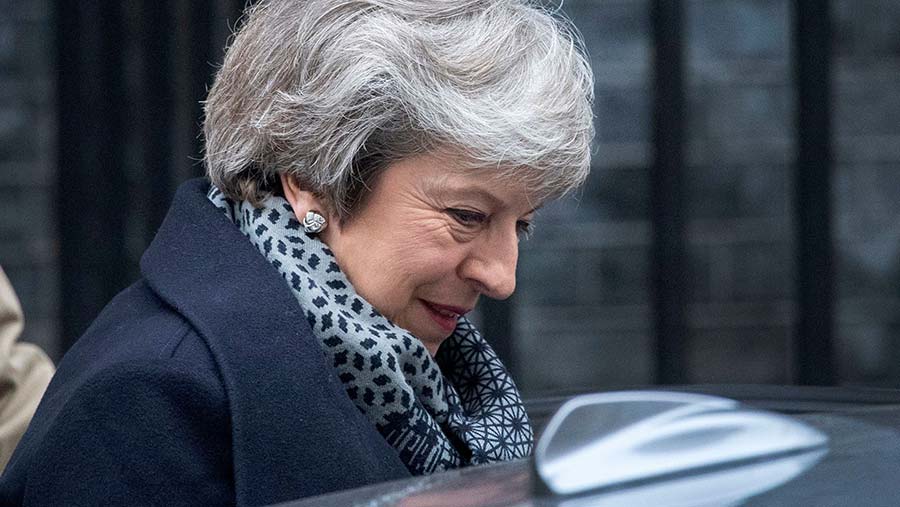 Industry leaders have called on Theresa May to rule out a no-deal Brexit after her EU withdrawal plan suffered a record defeat by MPs.

The House of Commons rejected the prime minister’s proposed deal by 432 votes to 202 – the biggest majority in parliamentary history – on Tuesday (15 January).

With no clear majority for an alternative outcome, the historic defeat raises the prospect that the UK could leave the EU without a deal on 29 March.

The UK Farming Roundtable, whose members include 14 farming organisations, said a no-deal Brexit would have a severe effect on UK food and farming.

Volatile farmgate prices and interrupted supplies would put 500,000 farming jobs at risk – and threaten the many firms that supply farm businesses, it warned.

NFU president Minette Batters said a properly managed and orderly Brexit was in the best interests of both farmers and the public. Agriculture is the bedrock of the UK’s largest manufacturing industry, food and drink – worth £113bn to the UK economy.

But she added: “There is a very real risk that a disorderly Brexit will lead to an immediate reliance on overseas imports that have been produced to lower standards, while many UK farms struggle to survive.”

The CLA said urgent clarity is now needed on how the prime minister plans to deliver a beneficial Brexit that doesn’t harm farming or the rural economy.

This must include the free and frictionless trade between the UK and EU on which many rural businesses depend, said CLA president Tim Breitmeyer.

What farmers think should happen next

Terry Moore, of Otmoor Farm, Horton-Cum-Studley, Oxfordshire: “I think we should just walk away from them [the EU] and tell them to get stuffed. The way it’s going, they still want to dictate to us. I think Theresa May should call their bluff and say ‘no’. Then they may come to the table and talk a bit of sense.”

Gwyn Jones, farmer, West Sussex: “With my non-ADHB hat on, I think it’s all about dealing with the here and now and getting the right deal for the country, the farmers and other industries. For farming, it’s all about having continued access to the single market. I don’t think it matters how they manage to do that, but we need to keep our eye on the prize.”

Robert Lasseter, Dorset pig and arable farmer: “I’m personally very nervous about the prospect of leaving the EU without a deal. There needs to be a deal and our parliamentarians need to sit down and thrash it out. Although I don’t agree with the referendum result, that’s democracy.”

If we don't leave the EU now surely that's overturning democracy? The sort of thing which is causing civil war all over the world, especially across Africa.

I honestly believe we'll be best, especially as farmers, to have a hard brexit and WTO rules and tarrifs.

The National Sheep Association (NSA) said it was immensely frustrated by the crushing rejection of the prime minister’s deal and the “poorly nmanaged negotiation process” to date.

In the case of a no-deal scenario, sheep producers would face the potential of a huge loss of export markets, with some 35% of British lamb currently going overseas, said NSA chief executive Phil Stocker.

There was potential for export tariffs as high as 50% on lamb exports and any fall in the value of sterling would not be enough to offset higher export costs.

Mrs May is due to present a revised Brexit strategy to parliament on Monday (21 January) in a fresh attempt to build a consensus.

What a no-deal Brexit could mean for farming