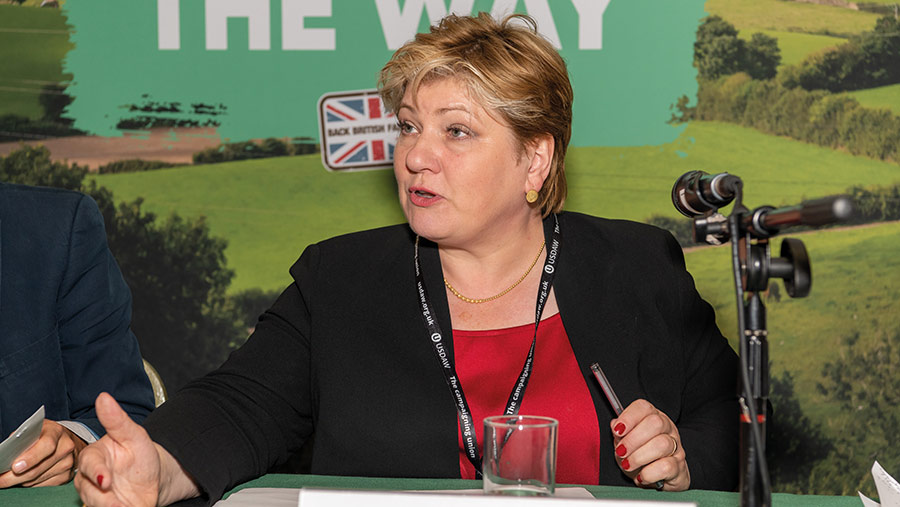 Shadow trade secretary Emily Thornberry has launched a scathing attack on the government’s trade policy which, she says, will drive farmers out of business.

The Labour MP told an NFU fringe meeting at this week’s party conference in Brighton: “I have been shocked about how brazenly, callously and recklessly they have gone about trying to drive through zero-tariffs, zero-quotas, zero-standard deals with the world’s biggest agricultural exporters.”

Ms Thornberry said a “pragmatic” trade deal would include:

Yet the government, in its dealings with Australia and now New Zealand, had ignored all of these considerations, she said.

“Those two precedents will leave us unable to argue for anything different when it comes to the US, Canada and Brazil. It is an act of economic, political and social folly,” she told the meeting.

NFU deputy president Stuart Roberts shared her frustration. While it was right to uphold the high standards of UK agriculture – something all farmers supported – he said this was being undermined by trade policy.

“The narrative tells us it’s about protecting our standards, yet we’re being asked to go toe-to-toe with every other producer in the world, who is not necessarily meeting those same standards. That is just not right.”

Instead, the UK should be using trade policy offensively, to drive higher standards in other parts of the world.

The US already did this for seafood imports, she said, as did Thailand for fruit and vegetables.

But the UK Department for International Trade seemed to have a “blind spot” when it came to agriculture, said Ms Francis.

The deals with Australia and New Zealand were being treated as “benign deals between friends”, yet on agriculture, the two sides were light-years apart.

“We are offering our best prize – zero tariffs and zero quota access – to the worst farmers in the world,” Ms Francis said. “Australia has got really, really good at the worst sort of industrial farming.”

Livestock farming was characterised by high levels of deforestration, while they were using double the amount of pesticides as in the UK.

But Ms Thornberry said there was still time for a reset – given that previous international trade secretary Liz Truss had now vacated her post and the “permissive” right-wing free-trade voices in parliament had subsided.

It was therefore important to quickly establish the new Trade and Agriculture Commission, to give agriculture a proper voice on proposed trade deals.

“Every other country in the world, when negotiating trade deals, looks at what is good for the country,” she said.

“We need to hold the government to these same standards, and that is to seek trade deals that benefit the farming industry rather than harm it.”