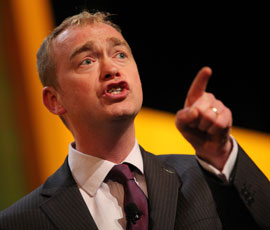 Cumbrian MP Tim Farron has called for urgent action to be taken after a report stated hill farmers were going hungry to feed their livestock.

Mr Farron, who chairs the All-Party Parliamentary Group on Hill Farming, made the comments after Oxfam published a report about upland agriculture.

The Challenges Facing Farmers study aimed to increase understanding of the hardships faced by families struggling to make a living in the uplands.

Cashflow problems have forced hill farmers to take drastic action, it says – cutting back on weekly grocery bills and forgoing basics such as food, as well as slashing costs to keep farms viable.

Mr Farron said: “This report is shocking, but sadly puts in print what many of us know already, that many hill farmers are working 80-hour weeks and living under the poverty line.

“These farmers tend our uplands and make sure our spectacular, world-class landscape is maintained and accessible.

“It is vital those farmers are fairly rewarded for their work and that the unfair market in which they operate is transformed so we have fair trade for British farmers.

“Government must ensure real action for our upland farmers.”

A single working-age adult living in a village needs to earn at least £19,820 in order to meet their needs, according to official figures.