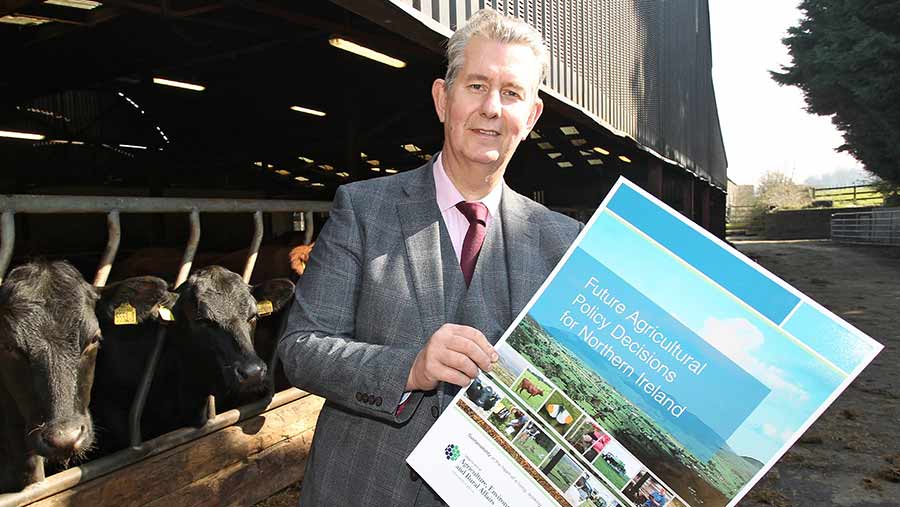 Area aids and headage payments will form the basis of new post-Brexit support for farmers in Northern Ireland – at least in the medium term – agriculture minister Edwin Poots has confirmed.

Setting out his plans to the assembly government at Stormont, the minister said the new policy will kick in from 2024.

In line with the previous consultation, which closed in mid-February, the new policy includes the following:

A farm sustainability payment will provide a farm income “safety net”.  This will be an area payment, based on the ownership of “entitlements”, subject to a simplified system of “farm sustainability standards” and participation in the new “soil nutrient health scheme”.

There will be a minimum claim size of 5ha – less than the 10ha initially proposed – and a progressive cap on payments of more than £60,000 per farm business, as supported by the Ulster Farmers’ Union.

This will account for the bulk of the budget initially, targeted at active farmers only.

The beef sustainability package is made up of a suckler cow measure and a beef carbon reduction measure, aimed at increasing productivity and driving down carbon emissions.

Suckler cow payments will be limited to animals no more than 29 months old at first calving (phased in over four years), compared with 27 months in the consultation.

This is intended to drive efficiency, but remains controversial for those with later maturing breeds. Farm quotas will be developed.

Previously, 24 months had been suggested.

The farming with nature package will be developed with stakeholders, with a focus on creating and restoring habitats important for species diversity.

All land managers with 3ha or more will be eligible to participate, including rented land, subject to a cap on payments.

The farming for carbon measures will encourage the breeding of cattle that are more environmentally efficient, the use of urease inhibitor fertilisers, the optimal timing of fertiliser and slurry applications, and the establishment of grassland with legumes to cut inorganic fertiliser use.

A “generational renewal programme” will also encourage succession and new entrants to the industry.

UFU president Victor Chestnutt said he was pleased the minister had taken on board many of the issues the union had made in its response to the consultation.

“It’s particularly encouraging to see the focus on active farmers and growers,” he said.

“Previously, we were given reassurances that the existing funding levels were secured for the next three years.

“We now have over 18 months to develop the detailed measures based on this framework, so that we can begin the transition from the existing farm support system in 2024.”