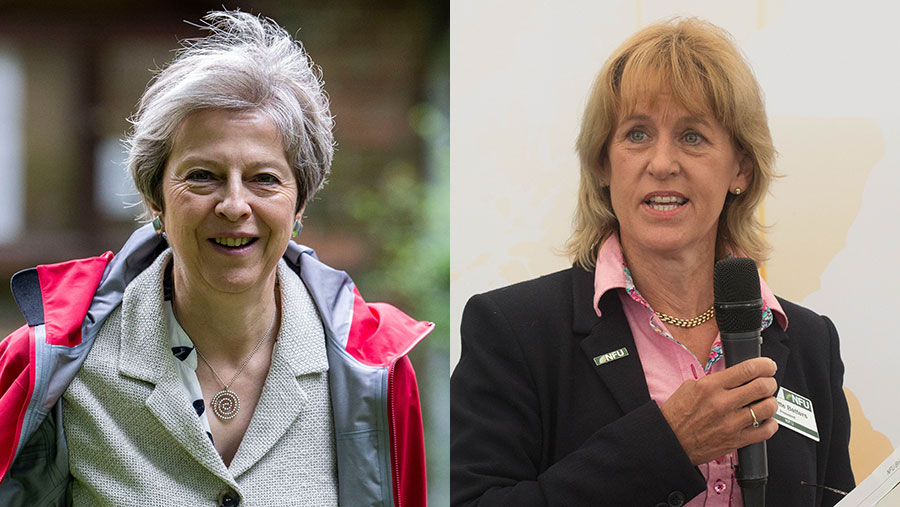 NFU president Minette Batters is to meet prime minister Theresa May to press home the case for British agriculture ahead of Brexit.

Ms Batters will raise a range of food and farming concerns from growers and livestock producers when she meets the prime minister on Tuesday, 26 June.

Her meeting with Mrs May comes weeks before the government is expected to publish its Agriculture Bill, outlining UK policies for food and farming post Brexit.

“This is not about a policy for the privileged few, this is about everyone,” she said. “We have been clear from day one: we as farmers want to produce food for all incomes in this country.

“Nobody, no person, whatever income they are on, must be disadvantaged from being unable to buy high-quality, affordable British food.”

Ms Batters said she would be making the case to Mrs May that farmers must have access to an adequate supply of seasonal labour – including temporary workers from overseas.

Growers have warned that the government’s continued refusal to introduce a seasonal agricultural workers scheme threatens to leave crops unharvested again this year.

Ms Batters said: “This is our first one-to-one chance with the prime minister to say seasonal labour is not an immigration issue.”

She said she would also address the government’s intention to replace direct payments to farmers with a new system largely based on environmental payments.

“We need to be very clear that any step back from direct support means the supply chain is currently not fit for purpose.”

The NFU is working with other organisations, including competition bodies, to ensure that farmers are able to trade in a fairer and more equitable way.

Ms Batters also addressed concerns that Brexit could leave British farmers open to a raft of cut-price food imports produced using methods that would be illegal in the UK.

“I will also make it clear that this is an Agricultural Bill – and on the back of that we expect our standards [to be maintained],” she said.

“We have said from day one that we do not want to see our standards affected.”

“We believe in our standards of welfare, of food safety and environmental protection and therefore it will be a red line for the NFU.

“It is a yes or no answer – those standards must be reflected in the Agriculture Bill.”

Ms Batters said there was a big lesson to learn from Sweden, which saw self-sufficiency in food plummet after ratcheting up animal welfare standards in the 1990s.