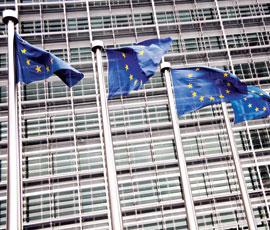 Germany and France have backed plans to freeze the European Union farming budget at current levels for 2014-20.

The two countries released a joint statement expressing their support for the European Commission’s proposals to freeze farm subsidies under the Common Agricultural Policy (CAP) at 2013 levels for the seven-year period, 2014-20.

After the meeting, the two ministers released a joint statement saying they “support the commission’s proposals to maintain the agricultural budget to the nominal level of 2013 for the period 2014-20”.

The announcement comes at a critical period for the future of the CAP, which accounts for more than 40% of the total EU annual budget of around €130bn.

This is because European ministers are in the final stages of talks that will radically shake up EU agricultural policy. They are due to meet in Brussels next week to thrash out the 2014-20 multi-annual financial framework (MFF).

The MFF, which establishes the budget for 2014-20, is agreed by heads of states and governments in the European Council by unanimity.

The UK, Sweden, the Netherlands and Cyprus have called for a cut in direct subsidies. But Aigner and Le Foll expressed their opposition to making cuts in agriculture to the resources of Pillar 1 of the CAP.

The ministers wrote that they supported a strong CAP which underlined the importance for “growth, employment, the environment and innovation in Europe’s rural areas, as well as Europe’s contribution to global food balances”.

Paulo de Castro, chairman of the European Parliament’s agricultural committee, said last week that current recommendations for CAP reform were based on maintaining the current level of spending.

However, the commission’s proposal post 2014 that 30% of direct payments to farmers should be linked to them meeting greening requirements under Pillar 2 (rural development) of the CAP remains a divisive issue among EU member states.

He said: “Does the public want CAP support targeted at UK farmers becoming glorified landscape gardeners, or to underpin resilience in our farming businesses, so that farmers can focus on doing what they do best – producing home-grown food?

“That to me is the public good the CAP should support, and which our politicians need to push in the negotiating rooms of Europe.”