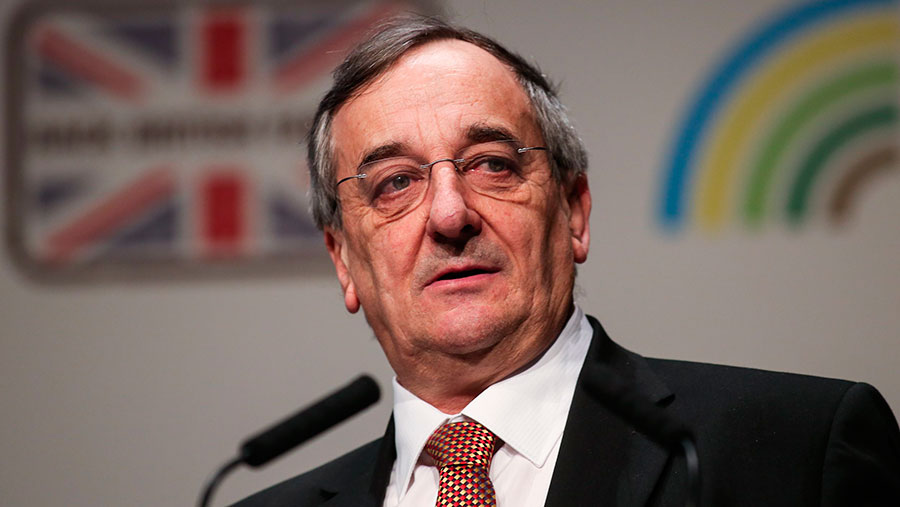 Farm leader Meurig Raymond has warned the government against “scouring the world” for cheap food imports after the UK leaves the European Union.

In his final speech before standing down as NFU president, Mr Raymond will say British farmers and food producers have a vital role to play in the country’s post-Brexit future.

British farmers want to be the “first supplier of choice – feeding the national with high-quality food that has been independently inspected to ensure its integrity, he will say.

Mr Raymond will address 1,500 delegates – including Defra secretary Michael Gove – in an opening speech to the NFU’s annual conference in Birmingham on Tuesday (20 February).

“British farmers want to be the first supplier of choice, servicing every price point and serving every plate, feeding Britain with food produced to a high standard, independently inspected to ensure its integrity.

However, Mr Raymond will also warn that “time is running out” for the government to pave the way for a successful Brexit that secures farming’s future outside the EU.

The NFU’s vision for post-Brexit farming focuses on the environment, productivity and building resilience to volatility – outlined as three policy cornerstones .

Mr Raymond will say: “To use a farming analogy, those three cornerstones outlined in our vision are three legs of a milking stool. There is a lot of spilt milk if you remove one of them.

“We must have frictionless trade with the EU. Everything else, including the final shape of any domestic agricultural policy, is dependent on that.

“And of course, those who advocate a cheap food policy – of scouring the world for low-cost food – should bear in mind the price paid in traceability, in standards and in the off-shoring of environmental impact.”

A post-Brexit trading environment must help UK agriculture so farmers can realise their true potential for Britain, believes Mr Raymond.

“British farmers are extremely proud of the standards they adhere to – most of them linked to the Red Tractor, which ensures the very best in traceability.

“We mustn’t let those standards slip and be undermined by a bad trade deal during Brexit negotiations.”

Without a thriving UK agricultural sector, there will be no farmers to look after and nurture the British countryside, Mr Raymond will argue.

“Britain’s farms need access to the EU market, we need access to a reliable workforce and we need measures to help our food and farming industry be more productive.”