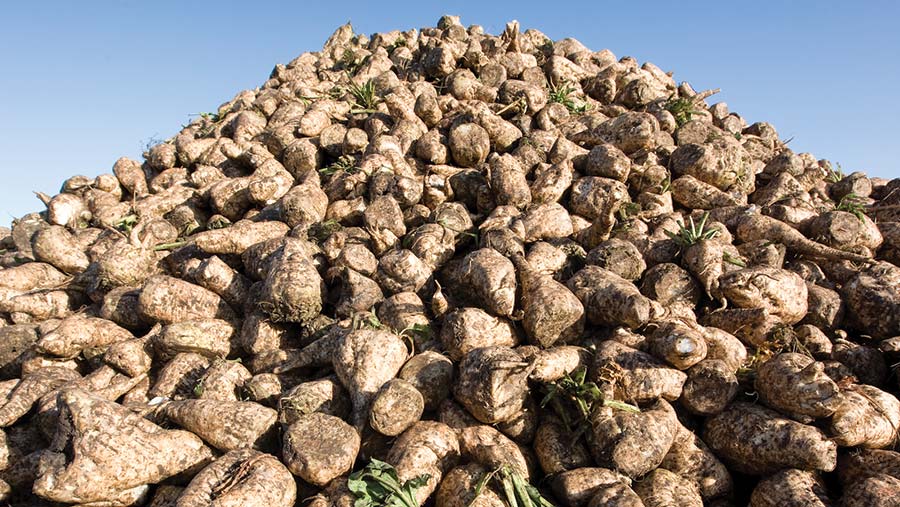 A government decision to allow 260,000t of raw cane sugar into the UK tariff-free could spell the end of the British sugar beet sector, say farm leaders.

The tariff-free import quota will apply annually from 1 January – after the end of the Brexit transition period.

It follows a consultation by the Department for International Trade.

The government insists domestic sugar beet growers and the sugar beet refining industry should not be impacted negatively as a result of the autonomous tariff rate quota (ATQ).

It says it expects the imported cane sugar to replace sugar imports from the European Union rather than domestic production.

It also says standards will not be compromised, because “all imported food is required to meet the UK’s high food standards”.

But NFU Sugar chairman Michael Sly said the move would allow imports of sugar produced in ways that would be illegal in the UK.

It could lead to permanent decline of the UK sugar beet industry, he warned.

The sole processor of the UK sugar beet crop is British Sugar.

Mr Sly said the quota would put significant pressure on UK sugar producers at a time when they were already dealing with the devastating impact of virus yellows disease.

“It is clear the government has paid no attention to its own consultation and completely ignored the feedback from the home-grown sugar sector,” he said.

“Its inconsistent and contradictory justification for introducing this quota shows no appreciation of the wide range of objections expressed in its consultation.

“The government claims this quota will have no impact on UK beet growers as the sugar price will not be affected. This is clearly wrong.

“Sugar beet growers will undoubtedly be affected by this quota, allowing imports of sugar produced in ways that would be illegal here.”

Mr Sly said it was unfair to expect UK growers to compete against food imports treated with pesticides containing active substances that were banned in the UK.

Neonicotinoid seed treatments – which can protect sugar beet against virus yellows – are banned in the UK, but not globally.

“The UK is one of the most efficient sugar producers in the world,” said Mr Sly.

“That is something we should be proud of and looking to enhance in the years to come.”

He added: “If we are to do that, we must be able to compete on a level playing field with growers elsewhere.

“I would urge the government to rethink its decision on this quota and abandon its introduction, considering the devastating impact it could have on the thousands of sugar beet growers in the country.”

A spokesperson for the Department for International Trade said: “As made clear in the government’s response to the consultation, we do not expect the proposed ATQ to have a material impact on the price of sugar.

“Evidence suggests that this ATQ is not likely to adversely impact sugar growers and the sugar refining industry.”