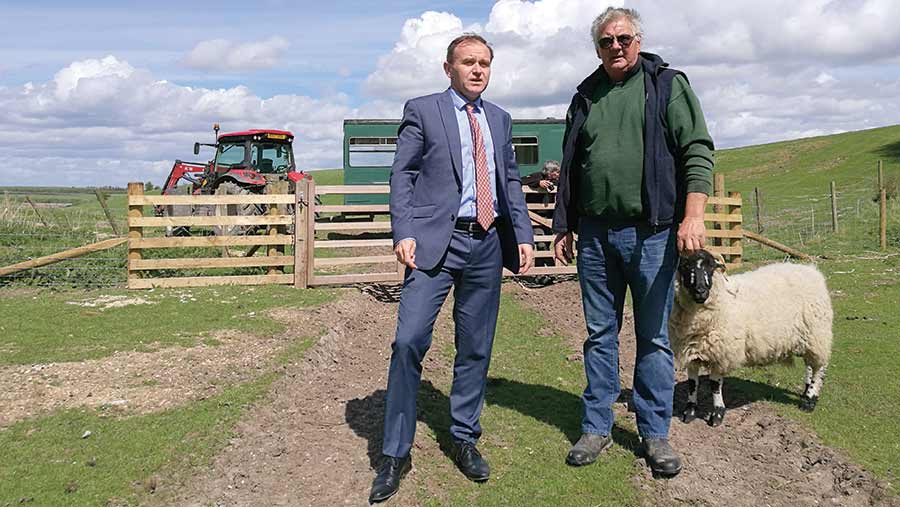 Defra plans to make agri-environment schemes so irresistible post Brexit that it will be a “no-brainer” for farmers to sign up, according to farming minister George Eustice, speaking on a visit to a mixed farm in Hampshire to see how caring for the environment and food production can go together.

The government is planning a major overhaul of farming policy after the UK leaves the EU, which includes phasing out farm subsidies and introducing a new support scheme to reward farmers who improve the environment and help wildlife.

The NFU has warned that food production must not be sidelined by the government’s focus on delivering a “green Brexit”.

“A farmer can not grow green, if they are in the red,” said Ali Capper, NFU horticulture and potatoes board chair.

But during a tour of Field Barn Farm, a 239ha mixed farm in Kingsclere, Mr Eustice moved to allay fears that Defra’s Brexit plans will hit farmers in the pocket.

The minister concedes that during the transition, which is likely to last five years and will see the phasing out of the single farm payment, there will be a “state of flux” in the way government supports agriculture.

But he says Defra plans to “frankly make it a no-brainer” for farmers to choose to enter an agri-environment scheme, adding that there will be “powerful incentives for the right type of interventions”.

Brexit will free the UK to design agricultural policy that empowers farmers to boost wildlife and biodiversity on their farms, alongside productive and profitable food production, Mr Eustice says.

And businesses such as Field Barn Farm demonstrate that looking after the environment and being a productive farmer are not “mutually exclusive” – they can coexist with the right support.

The farm has entered into a higher-tier Countryside Stewardship agreement, while maintaining its commercial farming viability.

By adopting certain agronomic practices that are more sustainable and better for the environment, farmers can deliver environmental outcomes, but still have commercial farming.

Mr Eustice says the government has been clear that the current £3bn annual budget for farming will stay “roughly the same” until 2022.

But as Defra’s future farming consultation paper outlines, the industry will subsequently undergo a gradual switch from the single farm payment system to a new scheme that “rewards farmers for the delivery of public goods”.

Defra is considering moving away from the “income foregone” principle, a feature of the current Pillar 2 schemes whereby farmers and landowners can be rewarded only for the amount they have theoretically lost by farming in a certain way.

“The quid pro quo for getting rid of arbitrary subsidies is that you genuinely reward people for environmental outcomes; a proper market and ecosystem services,” says Mr Eustice.

Brexit will allow the UK to leave behind the EU model of regulation, which is based on a rule book and inspectors coming on farm “obsessed with arbitrary penalties”,  Mr Eustice says.

There will need to be some baseline regulation – as there is now – but he does not envisage this changing much.

“The more important challenge for us is making sure that the design of the new scheme is not bureaucratic, is easy to get into and is rewarding,” he explains.

And he wants organisations such as the NFU and the Wildlife Trusts to co-design schemes that matter “rather than bits of paper to prove things to EU auditors”.

Defra intends to take into consideration the “broad spectrum” of people who will apply for schemes. Their circumstances as individual businesses and where they farm in the country will affect the type of agreement they opt for.

He wants the schemes to be as flexible as possible so that individual enterprises can do what’s right for them.

But he recognises the diversity of the UK farming landscape will shape policy. “What we do here on the Hampshire Downs on chalk soils might be very different from what we do on clay soils in Devon.”

Inevitably, some farm businesses will enter schemes in more ambitious ways than others, with longer-term commitments.

How the schemes will work

Mr Eustice says Defra wants to be “less obsessive about measuring things, penalties, deadlines and application forms”. Put simply, “all the things that drive us mad”.

Instead, he wants to focus on single interventions that are known to have multiple knock-on effects, and which don’t involve inspectors coming around farms with clipboards to measure their success.

“For example, if you have a grass ley with nitrogen-fixing properties, you give arable crops a break, you get more livestock back on the lowlands, you improve organic matter in the soil, you have more flowers for pollinators, more invertebrates for birds.” 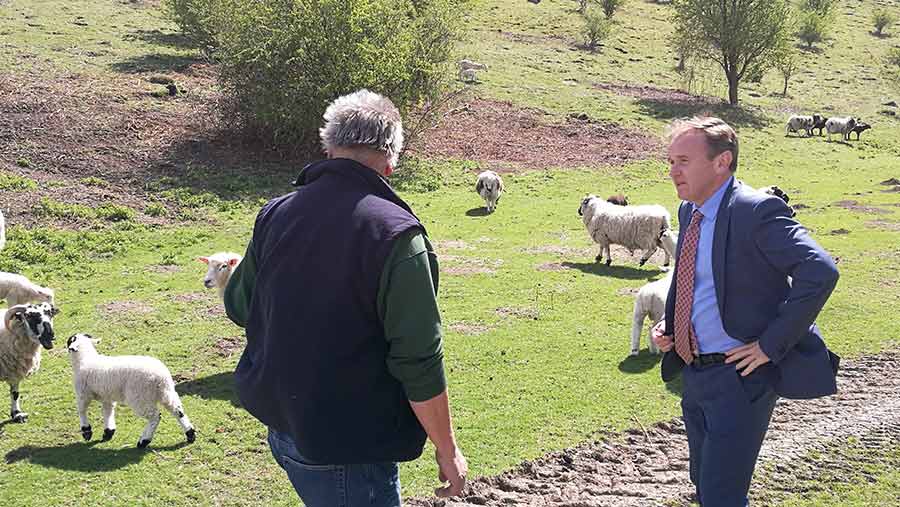 Farmers may be incentivised, for example, for choosing more pasture-based livestock systems, which will be good for soils, reduce soil erosion, improve rotation and – depending on your point of view – lead to better outcomes for animal welfare.

Individual farmers will build strong relationships with a case officer – for example, someone working for Natural England with local knowledge covering a geographic area.

Together, they will work through particular issues to ensure schemes tailored around a landscape or water catchment work.

Mr Eustice says he understands why some farmers feel apprehensive about Brexit, acknowledging that the fractious nature of the debate “split the country in two”.

But he believes that in five or 10 years’ time people will say “it was the right thing to do… it was a change that needed to be made and everything is fine”.

Farmers who want to apply for Countryside Stewardship have until 31 May 2018 to request their application packs for agreements to start in 2019.

This year, Natural England has introduced new Wildlife Offers so farmers can get started with as few as three options in place.

For more information on the four CS schemes available to farmers and landowners, visit Gov.UK and search for Wildlife Offers: Countryside Stewardship, email ts.worcester@naturalengland.org.uk or call 020 8026 1090.

A number of agri-environment activities are in place at Field Barn Farm, with 6% of the farm under management in terms of in-field arable options for wildlife and pollinator target species.

These schemes all affect margins at the edges of the fields, which do not affect the majority of the farming operation. The centres of fields are used for food production.

A Natural England spokesman said: “Field Barn Farm is a really good example of a farm that has embraced stewardship, but is delivering.”

The higher-tier options include:

1. Chalk grassland restoration. An area of priority calcareous grassland has been brought into the agreement. Stock-proof fencing and water supply capital works have been included so that grazing can be managed more closely.

2. Grass margin in wheat crop. Margins have been drilled with a mix of grasses, legumes and wild flowers to provide more pollinator habitat. They are also rich hunting grounds for barn owls and kestrels. Spear thistles and ragwort have established, as well as grasses and clovers. There is a need to actively manage options to get the best out of them.

3. Pollen and nectar plot. A block of sainfoin is being managed to produce nectar over an extended period of the growing season – an excellent resource for honey bees and the wider insect population.

4. Hedge gapping up. The farm has gapped up and reinstated several hedges in and around the farmyard. There is a parish boundary on the western edge of the farm that has had yew trees planted. The value of hedges is both in biodiversity and in preservation of the historic landscape.

Have your say on future farming consultation

Defra is consulting on the future of agriculture. It wants all farmers from different backgrounds to share their thoughts on its consultation document, so it can take their views into consideration as it develops future policy.

To respond, email the NFU at brexit@nfu.org.uk or Defra at agricultureconsultation@defra.gsi.gov.uk or online at consult.defra.gov.uk/farming/future-of-farming.

The consultation closes at 11.45pm on Tuesday 8 May.