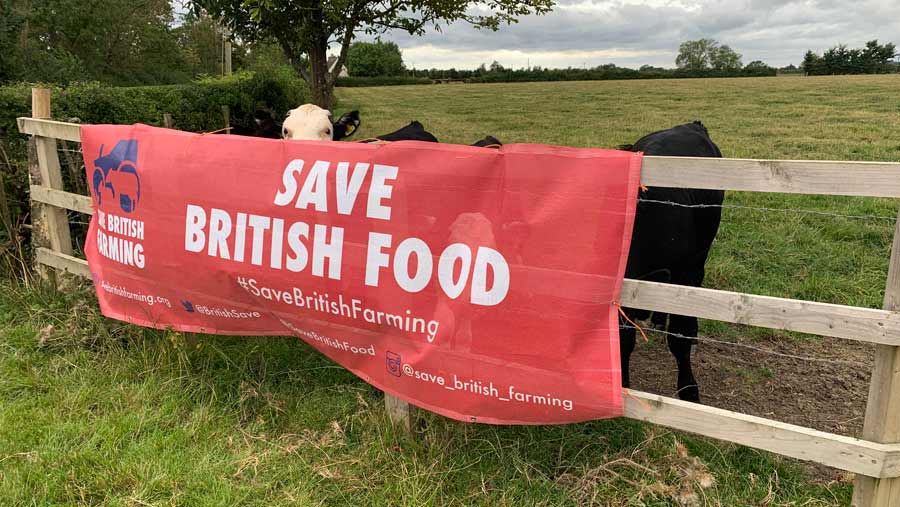 Organisers of Save British Farming (SBF) have unveiled new banners and posters urging the UK government and MPs to uphold our world-leading agricultural standards.

SBF are rolling out the “Board of Broken Promises” poster campaign to alert the public to the threats to our world-beating food system.

Farmers and members of the public will be able to order posters and banners to place in farms, homes and gardens across the country to help keep US foods produced to lower standards off British supermarket shelves in any future Brexit trade deals.

Mesh banners, PVC boards and stickers will soon be available to order from the savebritishfarming.org website. The group wants the entire country to be awash with banners over the summer period.

This autumn SBF is planning a harvest festival campaign, where farmers will be demonstrating in key regional centres, culminating in rallies.

Liz Webster, founder of SBF, told the Mail on Sunday: “There is hope if enough people fight for this. The overwhelming majority of the British public don’t want to lower food standards.

“We all are what we eat, and I don’t want young children eating hormone-injected beef or chlorinated chicken.

“It’s about the food on people’s plates – it’s not just about farms. We want to see these banners everywhere so that our MPs can see how passionately the British feel about their food.”

SBF announced its campaign in July, when farmers took to the streets of London for a go-slow tractor protest over threats to food standards, which ended in Parliament Square.

Recent polls have shown that 80-90% of people in the UK are against the lowering of food production and animal welfare standards as part of any future UK-US trade deal.

The UK government has vowed it will not undermine British farming standards in any future Brexit trade deals with the US and other countries. Accordingly, it has announced plans to create an Agriculture and Trade Commission to ensure that the UK agriculture sector remains competitive in any future trade agreement.

However, SBF and other farming organisations are demanding that legal protections for British food and farming standards are added to the Agriculture and Trade bills currently before parliament – a move the UK government has been reluctant to commit to.

Mrs Webster, a farmer’s wife from the Cotswolds, said: “The Save British Farming campaign was launched to pressurise MPs into ensuring our food standards are protected in law, ideally in the Agriculture Bill.

“This bill will be coming back to the Commons from the Lords with critical amendments. Every person exercised by the horror of eating American food is needed to join this campaign.

“We know that the government can be persuaded to change its mind – as has already happened with free school dinners and face masks.”

Some supermarkets, including Waitrose and Aldi, have vowed never to sell products that would be illegal to produce here, such as chlorinated chicken and hormone-injected beef.

A UK government spokesman said: “This government has been clear it will not sign a trade deal that will compromise our high environmental protection, animal welfare and food safety standards. We are a world leader in these areas and that will not change.

“Chlorinated chicken and hormone-treated beef are not permitted for import into the UK. This will be retained through the EU Withdrawal Act and enshrined in UK law at the end of the transition agreement.”

Independent agricultural economist Sean Rickard has thrown his support behind the Save British Farming (SBF) campaign.

Dr Rickard, the NFU’s former chief economist, shared his views on the issues confronting British farming in a Zoom panel discussion this week.

Danny Chambers, a vet and occasional contributor to New Scientist, who grew up on a family farm, explained the difference in the high animal welfare and production standards in the UK compared to the UK, which are under threat in the government’s new Agriculture Bill.

The panel was moderated by Gemma Lane, an environmental social scientist. A recording of the full 45-minute discussion is available to view on YouTube.